Obama's Taliban Airstrikes Are Part of a Failing Strategy 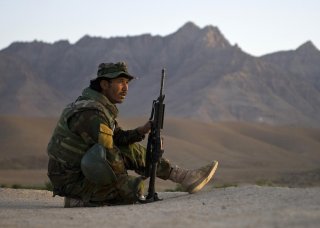 Once again, Pakistan faces the ignominy of having a major terrorist group leader killed on its soil in a unilateral U.S. attack. The CIA has conducted over four hundred drone attacks in Pakistan since 2004. But Saturday’s attack, which targeted and is said to have killed Mullah Akhtar Mansour, the Afghan Taliban leader, was unprecedented and shame-inducing for Pakistan, à la the bin Laden raid. It took place in Pakistan’s Balochistan province—an area previously off limits to U.S. combat drones. And it was conducted by the U.S. military, not the CIA. In other words, there was no attempt by the United States at providing itself deniability.

Indeed, President Barack Obama quickly hailed Mansour’s death as “an important milestone” toward bringing peace to Afghanistan. But the president, who has only seen conflict theaters emerge or worsen in Afghanistan, Iraq, Libya, Syria and Yemen under his tenure, has little credibility on the issue of securing peace, despite winning the Nobel Peace Prize. With the exception of the Iran deal, President Obama has played a critical role in making the Middle East and South Asia a much more violent region.

The killing of Mullah Mansour is, unfortunately, more likely to extend the conflict in Afghanistan than hasten its end. To maintain its unity and momentum, the Afghan Taliban is likely to seek a consensus on a successor to Mansour (who would also probably have to be acceptable to the Pakistani military). And to consolidate control over the group, Mansour’s successor will likely have to make formidable demonstrations of violence, much like Mansour had done—bringing great bloodshed to Afghanistan.

Mansour pulled the Afghan Taliban away from the Quadrilateral Coordination Group with Beijing, Islamabad, Kabul and Washington, despite apparent Pakistani pressure on him. The same compulsions—consolidating control and demonstrating power—will likely prevent his successor from pursuing a meaningful negotiation process with the Kabul government this year. It will be nearly impossible for the leader of a unified Afghan Taliban or a splinter group to consolidate power quickly and move his group toward a pause in or cessation of hostilities, as the insurgency gains in momentum vis-à-vis a dysfunctional state.

Only a severely weakened or constrained Afghan Taliban would come to the negotiation table in the near term. But sufficiently weakening the group would require a sustained targeted killing campaign against its senior leaders, irrespective of their location. The use of lethal and nonlethal tools of influence by the Pakistani military would also be necessary. It cannot be done by America alone. A U.S.-Pakistan convergence is necessary. But the two countries are moving toward a strategic divergence, especially as Washington tightens its embrace of New Delhi and assumes a harder posture toward Beijing. In Washington, the consensus is that Pakistan is at best a non-ally—hence Congress’s tightening of military aid to Islamabad.

The New York Times, citing unnamed U.S. officials, claims that Pakistani officials provided “general information” on Mansour’s “location and activities” ahead of Saturday’s attack, but it fell short of specifics, and the Pakistanis, most importantly, were not informed of the drone strike until after it took place. Given that Mansour spent some time in Iran, it is worth speculating whether Obama’s newfound friends in Tehran—whose relations with Islamabad have soured since March since Pakistan’s arrest of an Indian spy operating near its border with Iran—helped Washington track Mansour. However, the insurgent group leader’s alleged use of a machine-readable passport and cell phone, if confirmed, would mean that he effectively served himself on a platter to the United States.

The normally active spokesman of the Pakistan Army, Lt. Gen. Asim Bajwa, has been silent on Saturday’s drone attack. Only mid-level members of the ruling party, which has minimal control over national security policy, have been sent to face the wolves on the country’s talk news channels.

As usual, the people of Pakistan are the last to be told the truth of what is happening in their country by their own leaders. It may be the case that the Pakistani military decided that the irreconcilable Mansour was a liability, especially after Congress denied Pakistan a subsidized purchase of eight F-16s, and Washington agreed in principle to a landmark logistics deal with New Delhi.

But if Pakistan were truly an accessory to Mansour’s killing, the deed could have been done in a less humiliating way for its rulers. Much like with the Abbottabad raid, Pakistan seems to not only have been caught with its pants down—with a global outlaw living freely on its soil—but also a foreign power conducted kinetic activity on its sovereign territory, crossing the red line into what was the no-go area of Balochistan. Were there a true U.S.-Pakistan convergence on Mansour, one might have seen the Taliban leader shot to death in a Quetta street by plainclothes gunmen, giving Pakistan the deniability it would need. News reports in Pakistan would attribute the killing to na maloom afraad (unknown men) and unnamed sources would be able to point their fingers at foreign intelligence agencies, including Afghanistan’s NDS, which has conducted such killings in the past.

There are instances in which the killing of a high-value target has facilitated a reduction in violence in the region. In November 2013, the CIA killed Hakimullah Mehsud, the chief of the Pakistani Taliban, as his group indulged the Pakistani civilian government in talks, but continued to kill Pakistanis on a regular basis. The sham talks with the Pakistani Taliban eventually broke down. The Pakistani Taliban network began to splinter. But, most importantly, the Pakistan military initiated a bombing campaign targeting Miran Shah, the Pakistani Taliban headquarters, followed by a ground operation, known as Operation Zarb-e-Azb, clearing most of North Waziristan.

Since then, terrorism has precipitously dropped in Pakistan, while rising in Afghanistan. According to the South Asia Terrorism Portal, over three thousand Pakistanis died in terrorist attacks in both 2012 and 2013—the most ever in the country’s history. But the death toll dropped by 40 percent in 2014, to 1781, and another 47 percent in 2015, to 940—falling to their lowest levels since 2007, when the Pakistani Taliban umbrella organization was founded.

It’s hard to see the same being achieved in Afghanistan: a weak narco-state governed by a conflicted dyarchy. Most importantly, there is a huge gap in the capabilities of the Pakistani and Afghan militaries. The Afghan National Security Forces (ANSF) lack professionalism, face high attrition and casualty rates and rampant illiteracy, and are unable to manage basic logistics, including the provision of their own footwear. Furthermore, the ANSF has a marginal presence on its border with Pakistan, which Kabul belligerently doesn’t even recognize. Forget the idea of America filling the void. U.S. troop levels will never return to a number meaningful enough to change the balance on the ground.

Into the fifteenth year of the Afghanistan war, the United States has yet to prove its ability to calibrate the use of carrots and sticks to produce a durable reduction in violence. Indeed, there are indications that it is taking highly risky measures that will only exacerbate conflict in Afghanistan. According to the Wall Street Journal, the CIA and Afghan intelligence are providing cash, logistical aid and weapons to an Afghan Taliban faction led by Mullah Muhammad Rasool—a group allegedly linked to the so-called Islamic State.

Similarly, last year, an Afghan parliamentarian claimed that the Kabul government was supporting an ISIS-linked group in the northeastern province of Nangarhar. He alleged that the Pakistani militant group Lashkar-e-Islam (LeI) group, now supported by Afghan intelligence, was providing the group with logistical support.

Oddly, in Jalalabad in January, the Pakistani consulate in Jalalabad was attacked by this ISIS-linked group ten days after militants, allegedly supported by Pakistan, attacked the Indian consulate in Mazar-e Sharif. ISIS chose not to attack the consulates of “Hindu” India and “Shia” Iran located in close proximity. Afghanistan’s support for jihadists against Pakistan is not new. It has, in the past, supported the Pakistani Taliban, an Al Qaeda ally, in its war against Islamabad.

Until recent years, the Pakistani military has also relied on the tactic of supporting one militant group against another. The effects were disastrous: a compounding of the overall jihadist threat. The enemy of the Pakistan Army’s enemy would eventually become its own enemy. It supported the aforementioned LeI against the Pakistani Taliban. Eventually the LeI challenged the Pakistani state, and teamed up with both the Pakistani Taliban and Afghan intelligence, and now an ISIS-linked group in Nangarhar.

It is unclear whether the United States is offering support to other jihadist forces in the region. But the Obama legacy in Afghanistan, beginning with the 2009 surge, is abysmal. It includes record-breaking violence and opium production, thanks to the influx of weapons and support of militias. So much for countering violent extremism.

Pakistan’s contributions to the jihadist challenge in Afghanistan and the broader region are well known. But its mistake in the past two years seems to have been that it oversold its ability to bring the Afghan Taliban to the negotiation table, though elements within the Afghan government helped sabotage the embryonic talks with the Taliban by leaking the news of the death of Mullah Omar.