Odd Man Out: How the Independent Justin Amash Could Shake Up the 2020 Presidential Election 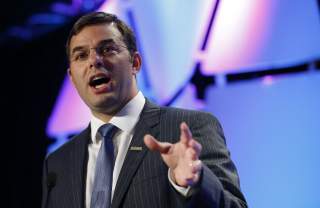 Washington circles are abuzz with the suggestion that Justin Amash, the ex-Republican congressman from Michigan, may mount a third-party presidential campaign in 2020. In the few days since leaving the GOP, he’s talked about “room for a third party” and refused to rule out running for president. But sources close to Amash and the Libertarian Party deny that a presidential run is in the works—although the door is still open. For the time being, the Libertarian-leaning representative is looking to build a fiscally conservative, pro-restraint coalition across party lines.

Michigan representative Justin Amash has made waves in recent weeks with his challenges to the Republican establishment. He first suggested that President Donald Trump should be impeached, then he contested the president’s authority to attack Iran without congressional approval, and finally left the party.

Amash seemed to send mixed signals about his next move, telling CNN that he’s planning to run for re-election to the House of Representatives, but confirming that he still “wouldn’t rule anything like [a Libertarian presidential run] out.”

In an interview with a local ABC affiliate, he added that “I don’t rule things out in where I might go in my political work. I want to do what is best for our country, and if there’s something I can offer, I’m willing to consider that.”

According to Corie Whalen, Amash’s communications director from August 2016 to September 2018, there’s no contradiction in these statements. “You think about some of these politicians who really have been planning their presidential runs for, quite frankly, their entire lives. He's just not that kind of guy. Any decision like that depends on factors that are still unknown to us,” she said. “Things are still a long way out. He continues to say he'll keep his options open, because that’s what he genuinely means. He's not intentionally being evasive.”

When asked what could signal an Amash 2020 run, Whalen told the National Interest that “if he were to make a decision, he would make that pretty clear.”

Libertarian activist and New York entrepreneur Charles Peralo doesn’t see any signs of Amash dipping his toes in the Libertarian primaries. “The current field of candidates is very poor, by almost universal admission, and Amash, while disagreeing with the party on issues such as abortion, still carries a lot of support,” he said. “That said, I saw where Gary Johnson was in 2016 and 2012. I’ve also spoken to players in the movement, from party chairs in the [Libertarian Party] to donors who are capable of writing $100,000+ checks. They haven’t heard a single whisper of interest in Amash 2020.”

Whalen claims that she has not heard of any plans for Amash to run for his current House seat as a Libertarian rather than an Independent.

Peralo, who ran for Libertarian Party chair in 2016, speculated that Amash will have a clear shot at the Libertarian nomination if he runs for president, but that the party will “focus on drafting people, such as Governor Lincoln Chaffee or historian Tom Woods, who are already in the party.” He added that Libertarians will not “like how [Amash] chose to run Independent over LP [Libertarian Party] in Michigan.”

For now, it looks as if Amash is sticking to his stated intentions. But his opposition to foreign military intervention sets him apart from other former Republicans and NeverTrump Republicans such as Bret Stephens, Joe Scarborough, and Bill Kristol. When asked whether Amash is willing to work with them, Whalen was quick to emphasize that Amash is not part of the NeverTrump movement.

“I want to clear something up. I've never once heard Justin refer to himself as a ‘NeverTrumper,’ as a NeverTrump Republican or a NeverTrump person in general. He doesn't define himself in that way,” Whalen emphasized. “Certainly having Trump in the presidency has exacerbated the partisanship of his colleagues, but he's not a Never Trumper.”

In his CNN interview, Amash claimed that he would have left the Republican Party even if Trump were not president. “I don’t think a lot of the partisan discord and the rest started with President Trump,” he told Jake Tapper. “It's been going on for years, and it’s gotten worse in recent years. But he’s helping to fuel it, and he’s making it worse, and he's making it more difficult for people to be independent in Congress.”

Mentioning the antiwar Rep. Ro Khanna (D-CA) and Rep. Zoe Lofgren (D-CA), along with Sen. Ron Wyden (D-OR), Whalen concluded that Amash “has always been willing to work with anyone, to build coalitions with anyone. That’s been his branding in Congress, especially when it comes to foreign policy and civil liberties.”

In the recent debate around the 2020 military budget, Amash voted for Khanna’s amendment to prohibit an unauthorized war with Iran, and co-sponsored an amendment along with Rep. Barbara Lee (D-CA) to revoke the 2002 Authorization for the Use of Military Force in Iraq.

“On any area where he can work with the more neoconservative on areas where they agree, say maybe free trade or others, I know he would certainly be open to that,” Whalen claimed. “He's not going to agree with them on foreign policy, but where they agree, sure.”