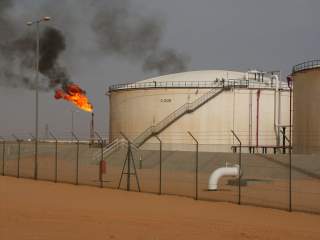 As political opponents of the Democratic presidential nominee often note, crisis has paralyzed Libya since 2011. To be sure, a power vacuum erupted after dictator Muammar el-Qaddafi’s death, opening the door to a political free-for-all, warring militias, and ISIS. Amidst the ensuing conflict, some hang their hopes on Libya’s greatest natural resource: oil. Ten years ago, over 60 percent of Libya’s GDP came from oil revenues. Today, after years of civil war and falling oil production, this number has been nearly halved. Under effective management, pumping more oil might ensure a successful democratic transition under the fledgling Government of National Accord in Tripoli. Certain realities—ranging from dilapidated oil wellheads to ISIS—undercut the prospects of such oil-fueled progress. Even without these obstacles, betting big on oil could prove disastrous. There is a road to peace in Libya, but it isn’t awash with petroleum.

Libya is precariously split between several factions vying for control. The UN-backed Government of National Accord, also called the unity government, formed in early 2016 and operates from Tripoli. The GNA faces an opposition body based in Tobruk, which collaborates with General Khalifa Hifter and his Libyan National Army (LNA). A third group, located south of Sirte, includes the remnants of the General National Congress (GNC) and several Islamist groups. Other unassociated militias hold territory across the country, including ISIS. Before Qaddafi’s undoing in 2011, Libya produced over 1.6 million barrels of oil per day, which generated most government revenues. Today, the country’s output is less than a quarter of that level—the oil sector is in shambles.

Libya is in disarray; the country is simply not ready to revamp the oil industry. The unity government is scrambling for consensus, while competing factions jockey for control of key oil infrastructure. Even if the political actors came to an agreement, the national oil company (NOC) faces technical challenges and the GNA must show it has the influence to effectively manage oil revenues. Increasing oil revenues will prove a daunting task.

First, the new regime in Tripoli is struggling to organize the country. A July merger reuniting the NOC is certainly a positive sign for the oil patch. However, the deal calls for the GNA to share revenues with its Tobruk rival and relocate NOC headquarters to Benghazi. It is unclear whether the GNA will agree to these demands, and General Hifter has yet to signal his approval. Actual progress is uncertain.

More recently, the NOC rejected a separate agreement, one in which the GNA pays the Petroleum Facilities Guard (PFG) to reopen oil export terminals. In 2013, the PFG blockaded several facilities in an alleged attack on corruption in the oil industry. The NOC claims that acquiescing to the PFG sets a treacherous precedent; any armed group could extort payment from the GNA. Without the cooperation of the NOC, which also threatened to revoke its recognition of the GNA, pumping and exporting more oil seems far-fetched.

Second, many upstream facilities and export terminals lie in territory contested between GNA affiliates, various militias, and ISIS, making higher production an even fainter possibility. For the many factions struggling to influence Libya’s next regime, oil infrastructure is a valuable bargaining chip. Rallying the industry requires careful coordination from wellhead to tanker. While fighting lasts, this is highly unlikely.

Third, technical issues beleaguer the oil sector after years of conflict. Constant fighting has damaged oil infrastructure across the country. For example, ISIS fighters riddled storage tanks at Es Sider and Ras Lanuf with machine-gun fire in January, causing them to explode. The resulting fires were visible from space. Other facilities have missed years of much-needed maintenance. Perhaps the newly organized NOC will address these problems, but repairs will take years—especially in insecure areas.

Fourth, a healthy oil patch requires capable, transparent governance. Unfortunately, political divisions hamstring the GNA’s capacity to build the institutions strong enough to ensure this. The unity government in Tripoli has waited months for a vote of confidence from Libya’s internationally recognized parliament, which sits in Tobruk. No such vote is likely, damaging the GNA’s legitimacy. In a more troubling development, newly leaked tapes suggest Western countries, including the United States, are launching airstrikes to help General Hifter fight off Islamist militias. Collaboration between the West and Hifter could prove toxic for the unity government. Simply put, the GNA has yet to politically establish itself—until this happens, it will lack the influence and legitimacy to responsibly manage the NOC.

Meanwhile, Islamic State poses a security threat. ISIS boasts five thousand fighters in Libya. Even if Libyan forces completely retake Sirte, Islamic State could find refuge in the loosely controlled south, where militants could knock out upstream oil and gas infrastructure. Much of Libya’s oil hardware sits above ground, making it uniquely hard to protect from such attacks. In sum, Libya must clear considerably high hurdles before cashing in on oil.

Even without these constraints, Libya should not exclusively rely on oil. Low oil prices have wrenched the budgets of petro-states across the world, but oil dependence is especially dangerous in developing countries, where its effects often snowball into what’s called the resource curse. Research shows that an influx of oil revenue invites corruption, makes violent conflict more likely and can hamper transitions from dictatorships to democracy. Making oil the solution only creates more problems.

Oil revenues should certainly play a supporting role in rebuilding Libya—democracies become more durable as per-capita GDP grows. But before drilling down, the GNA should consolidate its control and legitimacy throughout Libya, starting by resolving its differences with Tobruk. Such a reconciliation would give the GNA the much-needed political momentum and military strength to secure the rest of the country. For the Libyan democratic project to have a fighting chance, leaders in Tripoli must prioritize stability tomorrow over windfalls today.

George Ward is an energy analyst in Washington, DC.