Okinawa: A Crack in the Pacific Pivot to Asia 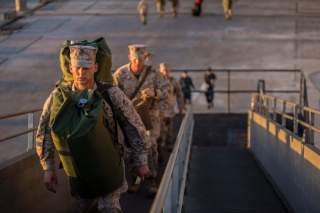 GINOWAN CITY, OKINAWA—The Obama administration has affirmed its intent to “pivot” to Asia by concluding new security agreements with the Philippines and Australia. In Japan, China's provocations over the Senkaku Islands and more aggressive stance towards South China Sea territorial issues have seemingly strengthened and refocused the pivot’s linchpin: the U.S.-Japan security partnership. But in Okinawa, the southern prefecture that hosts 74 percent of U.S. military facilities in Japan, the complex local politics that surround the U.S. basing presence have entered an uncertain new phase, one that threatens to derail the new security consensus held by Tokyo and Washington.

Okinawa has long been a source of both principled and patronage-driven opposition to the U.S. military. Some Okinawans hold sincere antimilitary beliefs, due to the historical memories of the brutal battle fought there during World War II and the U.S. military's colonial-style administration from 1952 to 1972 during which it forcibly acquired local land for base construction. A related recurring complaint is that Tokyo privileges the political needs of the main islands above the wishes of the remote prefecture’s residents.

But for over forty years, Tokyo has alleviated Okinawa’s "special base burden" by providing a wide range of payments, both to compensate individuals affected by base-related accidents and pollution, and to subsidize public-works projects for the regional government and base-hosting municipalities. In 1995, massive antibase demonstrations on the island followed the widely publicized rape of a twelve-year old schoolgirl by three U.S. service members. In response, Tokyo increased its compensation packages and, with the agreement of Washington, agreed to close and consolidate some basing facilities. Chief among them was a plan to relocate Marine Air Station Futenma, which is surrounded by crowded Ginowan City, to a new facility to be constructed off the coast of Cape Henoko in the north.

Almost twenty years later, the relocation has not even broken ground and remains mired in thorny local politics. Okinawans favor closing Futenma, but most do not want scenic Henoko turned into a massive construction site, while the tsunami that led to the Fukushima disaster in 2011 has raised additional concerns about the offshore facility’s vulnerability. Though in late December, Governor Hirokazu Nakaima formally approved the landfill for the new facility’s perimeter, just a few weeks later Nago City, the municipality that governs Henoko, decisively elected challenger Susumu Inamine who triumphed over an incumbent Mayor on a strong anti-relocation platform against the central and regional government. The issue once again will be central in the new gubernatorial elections of November that will pick Nakaima’s successor, while forcing the beginning of construction before the election may spark wide-ranging protests.

Meanwhile, new regional and global developments are further complicating the status of U.S. bases on the islands.

First, over the last twenty years, Okinawan activists have found transnational allies through the forces of globalization. Okinawan NGOs and citizens' groups, once isolated, have networked with similar antibase movements and protest campaigns across the world, exchanging tactics and raising the international media profile of their campaign. For example, activists have recruited celebrities and have taken out ads in U.S. newspapers depicting picturesque photos of Cape Henoko with an appeal to stop the construction.

Second, though policy makers in Washington and Tokyo have assumed that rising anti-Chinese attitudes in Okinawa would automatically generate stronger support for the basing presence, countertrends are also observable. A now widely cited opinion poll commissioned by the regional government from 2013 found that while Okinawan residents, indeed, have adopted unfavorable views of China at or even higher than the rest of Japan, Okinawans also believe that there will be an East Asian conflict at more than double the rate of the national average. But only 10 percent of respondents believe that, in response, Japan's effective control over territories should be "reinforced," while two-thirds support that idea that Okinawa’s role in Japanese-Chinese relations should be to “pursue friendship.”

Third, while Japanese Prime Minister Shinzo Abe has initiated a much-needed national debate on Japanese identity and security and proposed a constitutional amendment to expand the role of Japanese self-defense forces, the Okinawan prefecture is independently promoting itself as a future Asian regional hub in an attempt to lure investment and tourism under the new “Okinawa 21st Century Vision” campaign. A newly formed pro-independence party draws on antibase sentiment, while the island’s media outlets now emphasize the theme of greater autonomy in the island’s foreign relations.

The sum effect of these global and regional developments is that the traditional levers of compensation and patronage used by Tokyo may no longer be sufficient to ensure Okinawan cooperation to implement necessary changes in the force posture, even in the face of a more aggressive Beijing. The broader lesson is that the U.S. rebalance is taking place in an era where global information flows and new political networks are creating a far more unpredictable political and media environment than the traditional domestic populism and antibase opposition that defense planners have had to cope with in the past. Successfully managing and responding to these new forces may be just as critical to the pivot’s success as are the high politics of reaffirming commitments to alliances.

Alexander Cooley is Professor of Political Science at Barnard College and a Faculty Member of Columbia University's Saltzman Institute of War & Peace Studies. His books include Base Politics: Democratic Change and the US Military Overseas (Cornell, 2008).