An Olive Branch from Putin? 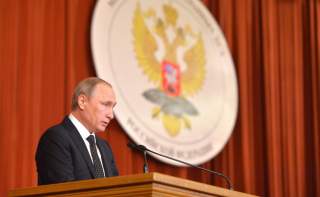 The good news about the public portion of Vladimir Putin’s June 30 meeting with Russian ambassadors was that there was no news—and that bodes well for those who have not yet lost hope that Russia’s relations with the West can be normalized. Despite containing a litany of customary anti-Western complaints, Putin’s speech clearly showed that he’s willing to improve relations with the West once Russia and NATO complete already-announced deployments of forces against each other.

Of course, once the press was ushered out of the meeting, Putin must have dispensed some new instructions to the diplomats and their boss, Sergei Lavrov, whose staff is currently drafting Russia’s new foreign policy doctrine. But at least in his public address to the ambassadors, who gather in Moscow every two years to receive strategic guidance, Putin did little more than repeat recent talking points. He referred to opportunities for deepening the “unprecedented” partnership with Beijing and advancing economic integration both with China and with Russia’s post-Soviet neighbors. As in his 2014 address to the envoys and other more recent speeches Putin did highlight the threats posed by NATO expansion and American unilateralism and faulted the collective West for not only ignoring Russia’s interests but also overthrowing regimes in “color revolutions.” At the same time, as has also become customary, Putin referred to Western countries as “partners” and left the door open for getting Russia’s relationship with the West back on better footing, even though NATO leaders are expected to sign off during their July 8-9 summit on plans to start rotating four “battalions-plus” size units next year in the Baltics and Poland in addition to one armored brigade and hardware that the U.S. plans to dispatch to the region to deter Russia.

If Putin were to have unveiled a major military-political initiative in response to NATO’s planned deployments, then his June 30 meeting with the Russian ambassadors at the Foreign Ministry’s headquarters would have been a good occasion in terms of timing and venue. But he chose not to do so. Perhaps, Putin has concluded that his Defense Minister Sergei Shoigu’s recent announcements of plans to form three divisions in western and southwestern Russia would suffice as a response to NATO’s planned deployments, at least for now. Or he may have taken heart from German Foreign Minister Frank-Walter Steinmeier’s recent vow to adhere to the 1997 NATO-Russia Founding Act, which prohibits permanent (as opposed to rotational) deployments of substantial forces in newer member states. Or both. Rather than rattle a sabre at the West in the presence of his diplomats, the Russian president only vaguely promised that “we will be able to defend ourselves and guarantee the security of the Russian Federation and its citizens” without getting locked into a new arms race with NATO.

The absence of explicit threats against the alliance in Putin’s speech—coupled with Russia’s recent consent to hold another meeting of the NATO-Russia Council after the Warsaw summit—indicates that Mr. Putin is looking beyond the current cycle of deployment-counterdeployment in Russian-NATO relations. A desire to normalize relations can also be inferred from Putin’s overtures to the United States and its allies, whom he urged to cooperate with Russia on creating a “broad anti-terrorist front.” In his speech Putin noted that Russia’s successes in arranging ceasefires and facilitating peace talks in Syria have been achieved in cooperation with “the United States and other partners,” not on its own. “I would like to emphasize that we are interested in close cooperation with the United States on international affairs,” Putin said. Such a conciliatory tone would have raised eyebrows as recently as last fall, when Putin was referring to Western countries as “our geopolitical adversaries,” but not anymore. Only two weeks before the ambassadors’ meeting, Putin told an audience that included European Commission President Jean-Claude Juncker and Exxon CEO Rex Tillerson that he accepts the United States as the world’s “only superpower” and “we want to work with the United States and we are prepared to.”

Of course, all of Putin’s recent overtures come with disclaimers and the June 30 address was no exception. While Russia is ready and willing to cooperate with the U.S. and its allies, this partnership needs to be “based on equality and consideration of each other’s interests,” he said, echoing his own earlier statements. Putin also made it clear that he opposes the West’s attempts to compartmentalize its relationship with Russia along the lines formulated by U.S. Secretary of Defense Ashton Carter, who views Russia as a “potential adversary” that the West needs to deter but can also cooperate with “where our … interests align.” “We will not accept the approach of that part of the U.S. establishment that thinks they can decide themselves in which areas we will cooperate and in which areas they will turn up the pressure, including through sanctions,” Putin said.

The Russian president also made it clear that Moscow will not acquiesce to Western pressure on Ukraine, where a particular bone of contention is the reestablishment of border control by Kyiv before the granting of special status to the war-torn regions in the country’s east. This position should come as no surprise, given that the Russian economy has weathered Western sanctions and is forecast by the World Bank to resume growth within the next year. Unlike his previous, 2014 address to the envoys, which was delivered in the heat of the armed conflict and contained twenty-two references to Ukraine, Putin mentioned Russia’s southwestern neighbor only four times. But he made it clear that he wants the Ukrainian conflict resolved as soon as possible and on Russia’s terms. These include guarantees that Ukraine remains a neutral state, unaligned militarily with the West. “We want to see a Ukraine that is a good neighbor and a predictable and civilized partner living in peace at home and in the world,” said Putin. “It is unacceptable to prolong the Ukrainian crisis and unacceptable to blame others for this, particularly Russia.” Such language, of course, could not have won Putin the cancellation of sectoral sanctions from the European Union, which extended punitive measures against Russia the next day after Putin’s speech and which now views Russia as a “strategic challenge.” But Putin had probably already deferred hopes of sanctions relief until October when EU chiefs will gather to discuss the punitive measures, which expire in January. By then, Britain’s influence on EU decision-making may have diminished due to the Brexit vote, while the influence of Germany, whose foreign minister advocates an easing of sanctions, may have grown.

Putin could not help but touch on Brexit in his June 30 speech, as Britain has been one of the European Union’s most influential Russia critics. “We will see how they all put democratic principles into practice,” he said of the June 23 referendum, making clear that Britain’s failure to leave the EU would add another weapon to Russia’s arsenal of “whataboutism.” At the same time, Putin also made it clear that Russia has not given up on the idea of a common economic and humanitarian space with the EU despite the deterioration of relations in general and disagreements over the bloc’s free-trade agreement with Ukraine.

While I have doubts about Putin’s intention to pursue a free-trade zone with the EU (and about prospects for building such a zone at all), his speech indicates he at least remains interested in normalizing Russia’s relations with the West, so that sides cooperate on issues of common interest, such as fighting terrorism and nuclear proliferation, and avoid unnecessary risks when competing in areas where their interests diverge (even if Putin officially opposes such compartmentalization). The planned meeting of the NATO-Russia Council and Russia’s next foreign-policy doctrine will both offer clues on what steps Russia would be willing to take to improve relations with the West and what it would require in return. Even more important clues will lie in Russia’s conduct in addressing the crises in Ukraine and Syria, where the U.S. has just agreed to cooperation between the U.S. and Russian militaries. As for Moscow’s bilateral ties with Washington more generally, though Putin and Barack Obama are to see each other at the September 4-5 G20 summit, Putin will likely postpone decisions on normalizing bilateral relations until the White House gets its new tenant next January.