Olympic Showdown Between Russia and the West 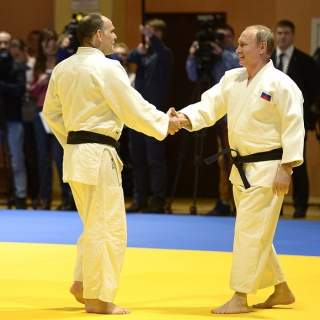 A state-sponsored coverup of widespread doping involving an undercover FSB—the KGB successor agency—agent furtively passing clean urine samples through a hole in the wall sounds like a subplot of a Cold War-era thriller. But according to a report commissioned by the World Anti-Doping Agency (WADA), this is part of what happened from late 2011 to August 2015 in the Russian Federation, leading the International Association of Athletics Federations (IAAF) to ban Russian track and field athletes from the 2016 Summer Olympics in Rio de Janeiro. The investigation was spurred by former director of Russia’s antidoping laboratory Grigory Rodchenkov’s assertion that he had administered performance-enhancing drugs to Russian athletes before the 2014 Sochi Olympics with the help of the FSB. The IAAF believes that banning the entire country's track and field team is imperative since the doping system has affected the vast majority of athletes representing and training in Russia. The International Olympic Committee (IOC) has banned all Russian sports ministry officials from the 2016 Games and has advised other winter-sports organizations to avoid patronizing Russia for the time being. The 2018 FIFA World Cup, to be hosted by Russia, will not be affected.

Today, the Court of Arbitration for Sport (CAS), which is based in Switzerland with offices in New York and Sydney, allowed the IAAF’s decision to stand despite objection from Russian athletes. However, the IAAF has made an exception for athletes that can prove that they have continually trained outside of Russia and are subject to an external anti-doping testing system. The IOC has stated says that these athletes should compete under the Russian flag, but the IAAF prefers wants these athletes to compete under the neutral Olympic flag. To complicate matters, WADA and the International Olympic Committee (IOC) are also considering a ban on the entire Russian team. This wouldn't be the first time a team has been banned from the Olympics—South Africa was barred for apartheid, and during Sochi 2014, Indian athletes had to march as independents in the Opening Ceremony because of a governance dispute involving their National Organizing Committee (NOC) after an official was found guilty of corruption by the IOC.

Nevertheless, the Russian reaction has been vehement. It is no secret that the Kremlin’s default reaction to international events is to accuse the West of engineering a plot against it, and this issue is no exception. President Putin called the situation an attempt “to make sports an instrument of geopolitical pressure.” Russian sports minister Vitaly Murko has admitted that mistakes were made, yet denied any state-sponsored doping and still suspended four officials over the allegations. He accused Rodchenkov of being a defector, having fled Russia for the United States after the allegations surfaced. State-run news outlet Rossiskaya Gazeta published an article in which the independence of the WADA investigation was called into question. However, other Russian sources, including famed Russian tennis player Yevgeni Kefelnikov, defended the WADA report. Putin complained about that innocent athletes were being punished as well, but announced today, through his press secretary Dmitry Peskov, that there would be no Russian boycott of the Olympics and created a special committee, which includes foreign participants, to investigate the affair.

Do Russian claims of political discrimination have any merit, or are they simply a defense mechanism to cover up wrongdoing? The fact is that the Russians likely believed that they could get away with pretty much whatever they wanted—and that their accusers seized upon their actions to blacklist all Russian athletes. Putin has an obsession with sports and medals that makes culpability at the highest levels of Russian politics all too plausible. At the same time, demands to ban Russia were presented even before the report itself was made public. The result is that a persecution complex was reinforced among the Russian public, whereby the West is invariably out to attack Russians wherever and whenever it can.

Certainly the WADA report substantiated Grigory Rodchenkov’s story, but WADA itself is not necessarily a balanced international body. According to WADA’s website, the organization is half funded by governments, with 47.5% of that funding coming from Europe and 29% from the Americas. Of that 29%, the United States and Canada contribute 75% of the total. Of course, these numbers take into account the availability of funding in the regions involved (Africa contributes a mere 0.5%). The privately-funded Olympic Movement contributes the other half of WADA’s funding. Almost half of this funding comes from sponsorships, most of them major Western-based companies (McDonald’s, GE, P&G, etc.) Though international in name, the IOC and WADA are more representative of the West than any other part of the world. In addition, the composition of the CAS panel responsible for the ruling to uphold the

IAAF ban consisted of an Italian, British, and American lawyer, though the CAS’s list of arbiters encompasses a more diverse group. Even so, Western lawyers are overwhelmingly overrepresented when compared to those from Asia, Africa, the Middle East, and South and Central America. In light of the composition of these international bodies, then, Russians who feel that their interests are not being fully represented have a legitimate point.

According to the latest report by WADA, the total number of Anti-Doping Rule Violations (ADRVs) for the year 2014 was 1,693. Russia had the highest number of violations, with 148. Italy was not far behind with 123. Following were India (96) and Belgium and France (91). Clearly, doping is not an isolated problem. Then why is Russia being singled out? The IOC/WADA’s effort to suspend Russia may be designed to prevent a repeat of previous recent Olympics, where numerous athletes from various nations have tested positive in retests after the games. But the real issue may be the apparently state-sponsored, standardized nature of Russian doping. The IOC and WADA are seeking to avoid a massive scandal during or after the Rio Olympics. It is also important to remember that Western Eastern Europe and the United States are subject to far more rigorous doping systems at the national level than Russia, Asia, Africa, and Latin America. Anti-doping authorities are more than aware of the long history of sports drug abuse in Eastern Europe, and have a right to be cynical.

Anti-Russian bias may also play a role. The Western press has been known to be harsh, perhaps excessively so, on Russia—for instance, the Sochi Olympics became a laughing-stock as press shared pictures on social media of their unfinished hotel rooms, and the Twitter account @SochiProblems became far more popular than the official Sochi Olympics account. Russian-American journalist Julia Ioffe—who is by no means a Kremlin shill and is a frequent critic of Putin’s Russia—even pointed out the disturbing schadenfreude in the West’s coverage of Sochi. In reality, Sochi’s foibles—and there were many—were not altogether uncommon in the history of Olympic games, noted David Wallechinsky, president of the International Society of Olympic Historians during the 2014 Winter Olympics. However, the coverage of Sochi amid the tension of West-Russia relations was notably more severe.

The Russian Olympic debacle is probably not a massive Western plot contrived to discredit Russia. But it is within the realm of possibility that the tense relationship between Russia and the West has caused the IOC and WADA to focus more heavily on Russian abuses than on those of Italy or France. It fits perfectly into the narrative of lawless Russia at odds with Western standards of decency. The fact is that neither the West nor Russia comes out looking particularly good in this episode.

Rachel Bauman is a resident junior fellow at the Center for the National Interest. Brad William Hummel is a University Graduate Fellow at the Pennsylvania State University, where he studies the history and philosophy of sport.