Once A Drug Den, Medellin Is On the Path to Prosperity 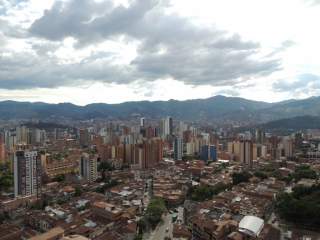 Two stories tend to dominate news coming out of Colombia, Latin America's third most populous country. First, after decades of drug-related violence and insurgency, the nation has become much safer this century, under the leadership of presidents Alvaro Uribe and Juan Manuel Santos. To be sure, severe problems including massive narcotics trafficking continue. But the security situation has improved greatly over the last fifteen years. That trend has been reinforced by an improving economy, led by sectors such as flower and coffee production, oil drilling and mining. Second, all of the above have produced the conditions for a peace deal with the FARC, the nation's main insurgency. Colombians are already bracing for what is likely to be a highly contentious referendum on the expected deal, which some including Uribe consider too lenient towards the insurgents, come October.

Beyond these broad developments Colombia is experiencing a third and equally noteworthy change of late. Call it the Medellín miracle. Medellín, the country's second-largest city after the capital of Bogota, and former stronghold of the infamous Pablo Escobar, has turned into a thriving and most agreeable place to live—an urban area of 2.5 million, situated in a valley at 5,000 feet altitude with a splendid climate. Understanding the Medellín story shows how far Colombia writ larger still has to go—but also provides a remarkable model for how to take the country forward to the next level of prosperity and safety. Most of this it has done through Colombians' own labors and sacrifices. However, through a program known as Plan Colombia and more recently a free-trade deal, the U.S. role has been crucially important this century. That role must continue, even expand, in the years to come.

Since 1991, Medellín has cut its homicide rate twentyfold. Back when Escobar and cronies ruled the streets with incredible brutality, Medellín and its 1.5 million inhabitants experienced some 6,000 homicides a year. That huge number is twice the estimated number of annual fatalities in contemporary Afghanistan (with 30 million people), according to UN figures. Or, for another point of comparison, it is almost twenty times the current rate in New York City. Today, Medellín with its 2.5 million people is still a violent place. But murders are down to 500 a year or less, comparable to some American cities, and 95 percent less per capita than a quarter century ago. Other crime statistics show similar progress.

What made this possible? Identifying the core causes is important for knowing how to sustain the Medellín miracle while also spreading the model to the rest of Colombia and the region.

Step one took place in the early 1990s, when U.S.-assisted operations tracked and killed Escobar, also taking down a few other key drug kingpins. This was based on good intelligence and commando operations.

Step two followed later in the decade and brought the homicide rate to about three thousand a year. It included some additional raids, plus temporary ceasefires with certain cartel leaders and other criminals. Step three was the Uribe revolution in the early 2000s. It had some roots in the work of Uribe's predecessor, President Andres Pastrana, who together with presidents Clinton and Bush created a U.S.-Colombia collaboration called "Plan Colombia." It brought far more resources to the counterinsurgency and countercrime fights, in the form of a larger and better trained military, key precision-strike technology and much higher tempo of operations and intensity. The nation's violence levels as a whole dropped in half, as did the FARC's estimated size and capacity; trends were even more pronounced in Medellín.

Step four is the largely untold story. It is how Medellín, under recent mayors like Anibal Gaviria and the incumbent, Federico Gutierrez, have worked with other local and national institutions to cut violence rates much further yet again during the decade of the 2010s. To be sure, progress has continued throughout Colombia, and the FARC has been brought to the negotiating table under President Santos. But in much of the nation, homicides have plateaued at rates that remain higher than the Latin American average and far above the world average. Kidnapping and robbery remain serious concerns as well. Americans still face travel advisories when voyaging to Colombia; diplomats there are not cleared to use most rural roads at night; insecurity discourages tourism and investment in many places.

Not so in Medellín. Yes, the city remains afflicted by serious crime. But the sense of progress and positive momentum is palpable—not only in the crime statistics but in urban renewal projects, new libraries, schools and community centers in the city's most difficult neighborhoods, impressive public transportation systems ranging from buses to a modest subway system to gondolas that range up and down the city's beautiful mountains, and booming business.

A few key initiatives have driven this recent progress:

All of this is very good news. But similar things are not happening as fast in most of the rest of the nation. Progress could also be imperiled, ironically, by a successful peace process with the FARC. If the nation and its political leaders declare victory against violence too quickly, and go too far in redirecting resources from security towards other admittedly important national priorities, favorable security trends could plateau or even be reversed. Instead, Colombia will need to continue to prioritize security, perhaps gradually shifting some resources from the armed forces to the police. The country will need to rebalance from fighting big drug kingpins and major insurgencies to providing what officials call "citizen security" for all. This should include a national plan that offers alternatives to violence to former guerillas, youth and other vulnerable populations so patterns of criminal behavior are interrupted and redirected to nonviolent, legal activities. A growing economy, but also targeted job programs and other activities, are crucial in this regard.

The implications of where all this winds up are very important—not only for Colombia but also for the United States. Latin America remains the most violent continent on Earth in terms of crime and urban insecurity. Colombia's successes to date are already inspiring other nations in the Andes, Central America and beyond in their struggles against drug cartels and insurgencies. Now, Medellín is showing how to attack gangs and criminal street violence as well. The United States should strongly support this process, including with possible increases in funding for Plan Colombia. Doing so need not be onerous. Plan Colombia has dropped in scale from its billion-dollar annual levels to something in the 300 million range. As Colombia reaches a crossroads, Washington should conditionally offer an increase in this fund, provided that Colombia writ large follows what Medellín has done and focuses its own resources on programs proven to work in addressing the urban security challenge. The benefits can be huge—not only for a country that is possibly America's closest friend in the region, but for Latin America as a whole, and thus the United States as well.