One Candidate to Rule Them All: Jeb Bush's Key to GOP Victory 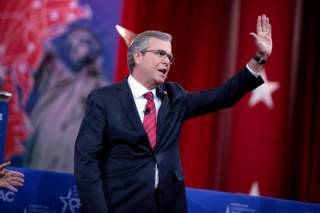 Jeb Bush has regained a narrow lead in the national polls, but even at this wildly premature stage, the early states are really where the action is at.

There the former Florida governor is on shakier ground. He was up in New Hampshire in the last April polls, but not by a big enough margin to easily overcome a poor showing in Iowa, where he is running anywhere from first to seventh place.

Even if Bush continues to perform well in the national polls, he likely needs to win Iowa, New Hampshire or South Carolina. To understand why, consider Rudy Giuliani.

Giuliani was the national front-runner for virtually all of 2007, sometimes overwhelmingly so (Bush’s leads have rarely been substantial). He essentially decided to bypass the early states, under the thinking that Iowa and South Carolina were too socially conservative, New Hampshire perhaps too close to Mitt Romney.

America’s Mayor was going to make his last stand in Florida. But by the time that primary rolled around, the primary campaign had passed him by. His national poll leads couldn’t be sustained in the wake of a series of single-digit primary and caucus performances. Giuliani dropped out of the race, never finishing better than third anywhere.

Jeb Bush may have an even stronger fundraising and organizational network than Giuliani. But with Marco Rubio also in the race, he can’t even necessarily count on Florida. Super PACs are going to mitigate Bush’s money edge somewhat. And it’s highly probable that a string of early losses would hurt him.

In the past, South Carolina was the Republican establishment’s firewall. The first Southern primary effectively saved Bush’s father and brother after early, unexpected losses. But the Palmetto State took a flier on Newt Gingrich in 2012, one of only two primaries the former House speaker won, and native son Lindsey Graham’s presence on the ballot could complicate things for everybody.

Team Jeb has said publicly it’d like to compete in places like Iowa and South Carolina, noting that its candidate hasn’t made as many campaign stops as his rivals. Maybe the leads enjoyed by the current Iowa front-runners, for example, will prove as evanescent as Michele Bachmann’s and Herman Cain’s. Bush has done well in some South Carolina polls.

But Bush doesn’t have his brother’s cozy relationship with evangelicals, though in Florida he certainly won their votes. Some reports suggest the rumblings on the ground in South Carolina haven’t been very positive.

Jeb’s best bet may be to target New Hampshire. Not only would a stronger showing there hedge against slippage in Iowa or South Carolina, but it would deal a blow to potential rivals. New Hampshire is the early primary Rand Paul and Chris Christie are most likely to win. Scott Walker and potentially Marco Rubio could win there.

Keep candidates with a plausible path to the nomination off-balance. Encourage the fragmentation of conservatives. Hope that candidates like Ben Carson can continue to siphon off a significant share of the vote without really coming close to the nomination.

That’s the key to a Jeb Bush win. It’s not the usual path for an establishment front-runner. As late as when Bush scared Mitt Romney out of the 2016 race, it seemed possible that he would launch a shock-and-awe campaign against opponents comparable to his brother’s in 2000.

George W. Bush quickly raised more money than his rivals. He wooed conservative intellectuals and policy wonks. And he married the evangelical vote to the Republican establishment. By getting the Christian right in his corner early, he made it impossible for Steve Forbes or someone else to effectively challenge him from the right. That only left space for John McCain to do so from his left, ensuring McCain would ultimately lose.

Jeb Bush is going to have to run more like Romney. He will have to win a war of attrition against candidates with less money, organization, experience, polish and poise. He’ll have to stay one step ahead, but he’ll never be the overwhelming, uncontested favorite.

There’s just one problem with running like Romney in 2016. Rick Santorum will likely be among Bush’s weakest challengers, not his strongest. The current field is much better equipped to handle an establishment front-runner.

Bush should camp out in New Hampshire and hope that his conservative rivals destroy each other.