One Step Closer to a Bad Idea: A European Union Army 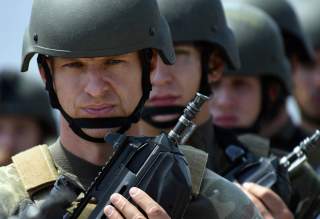 Bureaucrats in Brussels have long yearned to control the armed forces of the European Union’s member states, with the ultimate goal of creating an EU Army. The United Kingdom has largely stymied these efforts, rightfully seeing them as infringing on national sovereignty and creating a competitor to NATO.

Now, however, with the UK leaving the EU, euro federalists believe the time is right to push forward plans for creating a European defense force outside of nation-state control.

Should that effort succeed, unelected EU officials would decide whether or not to send “their” troops into combat. The decision to deploy force with potentially lethal consequences for some service members is one of the most sacred duties of any government. The idea that unelected, unaccountable, unremovable bureaucrats could send a spouse, child, or friend into harm’s way should give many in Europe pause.

Yet this week, the European Council took another step forward in making that dystopian scenario a reality. It signed off on the creation of The Permanent Structured Cooperation (PESCO). The agreement is not an EU Army, but constitutes a big step toward creating an eventual EU Army.

Although ostensibly about coordinating defense procurements and pooling money and military capabilities, PESCO is another step towards the EU wrestling more control of security matters away from individual member states. Of current EU member states, only Denmark, Malta and the UK (which is leaving the EU) will not take part.

Regarding PESCO, EU Commission president Jean-Claude Juncker glowingly tweeted: “She is awake, the Sleeping Beauty of the Lisbon Treaty: Permanent Structured Cooperation is happening. I welcome the operational steps taken today by Member States to lay the foundations of a European #DefenceUnion. Our security cannot be outsourced.”

With or without PESCO, NATO will remain the only institution capability of bringing real capabilities to bear in defense of Europe.

That is not to say the Trump administration should not make its opposition to the EU’s recent power grab known. The EU’s continued drive toward defense integration conflicts with each of the Three Ds, laid down nineteen years ago by then Secretary of State Madeleine Albright.

Albright erected three guideposts for U.S. policy toward EU defense integration efforts: no decoupling of the United States from defense in Europe, no duplication of NATO, and no discrimination against non-EU European NATO member states. These Three Ds are today as relevant as ever.

EU efforts at deeper military integration have not delivered increased military capability for the United States or for NATO. Instead, they compete with NATO for scarce European defense resources.

Every Euro spent on duplicative structures (take, for instance, the creation of an EU military HQ earlier this year) is one less that can be spent on actual capabilities.

Even coordination on procurement, research and development that PESCO sets out to solve, can be achieved more efficiently and effectively through bilateral or multilateral arrangements between individual nation states, or through NATO.

Moreover, EU defense integration discriminates against non-EU NATO members such as Albania, Montenegro, Norway and Turkey, nations that are critical to maintaining peace and stability on the continent.

Finally, EU defense integration is decoupling. The EU will never be able to provide the security, which NATO and robust U.S. participation in Europe currently do. Efforts that undermine the primacy of NATO for security matters in Europe, or which weaken the transatlantic security link, will serve to decouple the United States from the legitimate interests it retains in a peaceful and secure European continent.

The United States has sacrificed—and continues to sacrifice—much in terms of blood and treasure to keep Europe free and secure. America’s outsized influence in NATO is commensurate with its outsized investment. EU integration efforts threaten to decouple the United States from this investment, and water down American influence in European security.

History has shown that EU defense integration efforts are highly unlikely to lead to increases in European capabilities. Worse still, they undermine NATO, the ultimate guarantor of security in Europe, and weaken the transatlantic link. The United States should help Europe correct course by advancing a NATO-first agenda that ensures American engagement and influence in the continent’s defense.

Daniel Kochis is a policy analyst specializing in European affairs at The Heritage Foundation’s Thatcher Center for Freedom.