Only Politicians, Not Scientists, Can Solve The Coronavirus Crisis 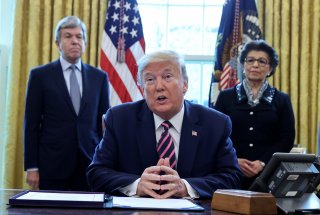 The two biggest casualties of COVID-19 are the public’s faith in the certainty of science and the effectiveness of political leaders.

The public is accustomed to seeing science as producing unchanging truths, which it definitely supplies for relatively settled subjects like the link between cigarette smoking and lung cancer. But a novel coronavirus offers few certainties at its start. The data comes from different countries, measurements, and standards. Only the total tested, not the total infected, is known. So, the transmission rate remains a mystery. Certainty, like a cure, is far away.

So, it wasn’t surprising that scientists were initially confused and confounded by the tsunami of data coming at them while the public fumes. Indeed, this what usually happens in pandemics. Consider the AIDS crisis of the 1980s. Dr. Anthony Fauci, who then as now is director of the National Institute of Allergy and Infectious Disease, told the Washington Post in 1989:“In the beginning, those [AIDS activists] had a blanket disgust with us. And it was mutual. Scientists said all trials should be restricted, rigid and slow. The gay groups said we were killing people with red tape. When the smoke cleared, we realized that much of their criticism was absolutely valid.”

In this pandemic, history repeated itself. In February, many scientists denied the usefulness of protective masks.By March’s end, they were all-but-mandatory in every country in the world.

Then, there is a raging debate about hydroxychloroquine, an anti-malarial in use since the 1930s. Dr. Fauci and others consider it “unproven” while other scientists and doctors cite recoveries seemingly prompted by the drug. Whatever its merits, science does not yet seem to offer a unified, objective answer.

And the public finds this uncertainty unsettling. People are not reassured when government scientists speak in probabilities or change their minds frequently, as they have done.The public expects them to be like learned judges handing down the law, not cautious detectives piecing together a theory of the case.

Yet this is not the fault of government scientists—when the evidence is mixed, what else can they reasonably say?—but of politicians. These elected men and women have put the scientists before the press and dutifully followed every zigzag of their changing understanding of the viral menace.

Fearing for their own reelections in their cities and states, they have failed to balance between two competing public goods: a healthy public and healthy economy. Remember, economic downturns are statistically correlated with health effects too. They are measured in heightened alcoholism, crime, depression, drug use, divorce, domestic violence, and suicide. To reduce both risks, political leaders could have steered a middle course between anti-virus measures and economic growth. It is hard line to draw, of course, and there is no perfect way to do it. Yet that’s what leaders are elected to do, balance competing public goods.

Political “tunnel vision” on the virus has its risks, too. More than 26 million Americans were unemployed as of April 18. Meanwhile, the estimated 37 percent of jobs that can be performed at home are overwhelmingly white-collar: accounting, consulting, law, media, programming. This class and race disparity in economic pain could become explosive in many states.

While big firms are largely fine, the nation’s biggest employer, small businesses, are cash starved. The median U.S. small business holds just 27 days of cash reserves, a 2016 JPMorgan Chase study found. In many places, they have been shuttered for more than forty days. Meanwhile, federal grants are channeled through banks, which are putting their most solvent customers first—leaving too many small firms denied and desperate. Another fault line that could erupt, between the connected and the abandoned.

One thing history teaches repeatedly is that public unrest can weaken political systems, even democracies.

What realistically can be done? Let’s recognize that self-isolation succeeded in preventing the dramatic hospital over-crowding that Italy suffered while acknowledging that self-containment is not a cure, but a result of the absence of one.

Next, let’s admit that this is not a long-term strategy. The root Latin word for quarantine refers to forty days, roughly the amount of time the public will voluntarily separate itself.

People are starting to defy isolation orders. Note how crowded Florida beaches and Manhattan parks were this past weekend. Protests at state capitals are spreading too. Without political leadership that balances personal and economic health, such mutinies will grow and may eventually rock the foundations of American democracy.

Finally, let’s focus on the two things that scientists do agree on: social distancing and employee hand-washing. These should be mandated, along with more glass barriers between cashiers and customers, stricter enforcement of employee hygiene standards, and tougher standards for air-filtration systems. It also means moving more public events—like court trials or class lectures—online as well as all government payments and form submissions. In short, a sensible, staged re-opening of the economy matched with new countermeasures.

This is beyond the scope of scientists. They are busy synthesizing the flood of data and calibrating their understanding. This is the role of political leaders: to reassure the public by setting standards and balancing competing goods. In short, by leading.