An Opening on North Korea? 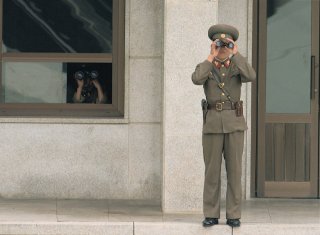 In the last few months, shuttle diplomacy over North Korea’s nuclear program has intensified. This weekend, diplomats from South Korea, Japan and China are likely to discuss the issue in Seoul. Last week’s White House summit with South Korean President Park Geun-hye produced strong affirmations of solidarity on the nuclear issue. Will it be enough?

Until recently, neither administration has had much success in confronting the North Korean threat. In fact, the situation has gradually deteriorated. As North Korea approaches the critical threshold where it could deliver a nuclear warhead by missile, the crises it provokes every few years will become more and more treacherous. The military crisis that dominated the peninsula for the month of August—in which the two Koreas faced off over the injury of two South Korean soldiers by landmines—was the latest in this trend. In the last year of the Obama administration, the allies must look for ways to keep from passing this policy malaise to the next U.S. president.

However, events since the August crisis may have created an opening on North Korea, and the favorable resolution of the August crisis suggests a way forward: the allies should move assertively to capitalize on recent developments, with South Korea leading the alliance. Three features of the August crisis point toward a compelling model for deterring or resolving future crises: improving South Korea-Chinese ties, a tantalizing deployment of Chinese forces to its border with North Korea and surprisingly constructive North-South negotiations. Together, these developments represent a narrow opportunity to revitalize a U.S.-ROK alliance that has drifted in recent years.

The most recent crisis began on August 4, when anti-personnel mines planted near a South Korean guard post detonated and maimed two soldiers. In a gamble, President Park demanded that her officially infallible northern neighbor apologize for the attack, and resumed propaganda broadcasts toward the north that had been suspended for more than a decade. North Korea threatened to attack the loudspeakers, put 70 percent of its submarine force to sea, initiated an exchange of artillery fire across the DMZ and deployed amphibious invasion forces to the border. Hours before North Korea’s threatened deadline, the sides agreed to marathon talks that would last for forty hours and result in a North Korean expression of “regret” for the attack, withdrawal of the loudspeakers and a rare opportunity for families separated since the Korean War to briefly reunite. Park’s gamble seemed to pay off: South Korea selected a firm but nonmilitary response, successfully brokered a favorable compromise to deescalate the crisis and laid the foundation for a possible future detente.

South Korea navigated the crisis without direct involvement from the United States, which remained relatively quiet during the August crisis. In an early 2013 crisis, in which tensions escalated following the North's third nuclear test, the United States deployed two B-2 stealth bombers to drop inert munitions on a South Korean range. Overt U.S. threats like this have not always helped to moderate the behavior of a proud and paranoid regime obsessed with U.S. power, and in 2013 caused another round of hysterical threats from the North.

By contrast, the U.S. response this summer was far more modest. In August 2015, the U.S. Air Force Chief of Staff Mark Walsh insisted in August that the three B-2s then being deployed to Guam were on a scheduled rotation. No one needed to be reminded that the B-2s were just hours away. Notably, it was a spokesman for the South Korean defense ministry who gave the most prominent public statement regarding U.S. forces, telling reporters that “South Korea and the U.S. are flexibly reviewing the timing and deployment of strategic U.S. military assets.” The model seemed to work well: by eschewing noisy threats, the United States allowed the Park administration to patiently negotiate a resolution with its paranoid neighbor. This may not have been possible if North Korea had felt the need to bluster in response to a U.S. threat.

While the United States was unusually quiet, there were indications that China was uncharacteristically assertive. In the days just prior to the start of negotiations, Chinese social networking sites showed evidence that the People’s Liberation Army was deploying light armored formations to their border with North Korea. Though Beijing later denied the deployment, pictures show tank destroyers, anti-aircraft guns and self-propelled howitzers deployed by rail and road near the town of Yanji, which lies close to the northern tip of the China-North Korea border. In recent years, following a series of incidents in which hungry North Korean soldiers crossed into China and murdered civilians, China has been investing in border security, including by deploying PLA units on a standing basis—but the size and composition of the August deployment was new. Pyongyang surely noticed that the forces deployed were ideal for operating in mountainous terrain and poor infrastructure against a combined arms force. It has been a long time since 1969, when Chinese troops crossed into North Korea and Kim Il Sung could do little but hope that they would leave of their own accord—but Pyongyang has no interest in provoking a repeat performance.

As Sino-North Korean relations continue to cool, Sino-South Korean relations are warming up. After the August crisis, South Korea moved quickly to tighten collaboration with China on limiting North Korea’s nuclear program. In early September, while Kim Jong Un remained ensconced in Pyongyang, President Park attended the Beijing military parade celebrating the 70th anniversary of World War II and met with Chinese President Xi Jinping on the nuclear issue. In a joint appearance, the leaders warned the North against new provocations and expressed an interest to resume the Six-Party Talks on denuclearizing the peninsula. While Park expressed gratitude to Xi for his role in resolving the crisis, a Chinese party paper lamented “differences” with North Korea over its nuclear issue.

This new look for South Korea—leading negotiations with the North, while collaborating more closely with a more assertive China—proved to be a highly effective combination for resolving the August crisis and restoring a modicum of stability. Since August, South Korea, China, the United States and the IAEA have resumed high-level diplomacy to spur momentum on denuclearization. China has repeatedly called for the resumption of the Six-Party Talks, the forum of regional powers that has failed since 2003 to find a way to denuclearize the peninsula, and last week dispatched a senior party official to deliver the case to Kim Jong Un. Intentionally or not, North Korea has left the window open by choosing to celebrate the 70th anniversary of its ruling party with a massive military parade rather than a test of nuclear or missile technology.

In the last year of the Obama administration, the alliance should move to capitalize on this opening, to place U.S. North Korea policy on more sustainable footing before it is handed to the next U.S. and ROK administrations. The allies should build on the lessons of the August crisis and shift to a “South Korea–first” policy toward the North. Under this model, the United States would provide support, advice, and any necessary military capabilities, but allow South Korea to spearhead escalation management and negotiations with its northern neighbor. South Korea can and should take the lead in communicating allied policy in crises, in negotiating with North Korea, and in representing alliance preferences in regional meetings over the nuclear issue. At the same time, Presidents Park and Obama should consider new models for regional diplomacy, including replacing the defunct Six-Party Talks format with a smaller group that considers conventional arms control in addition to denuclearization.

South Korea is uniquely positioned to influence the strategic situation on the peninsula. Though the United States can offer important diplomatic, military and economic support, South Korea has exclusive leverage on a wider range of tools in managing its neighbor to the north, including with the Kaesong Industrial Complex, inter-Korean family reunions and potent psychological operations. Decades of military modernization, close cooperation with the United States and joint handling of successive crises has turned South Korea into a capable and credible military threat to the North. Though U.S. forces will continue to play an important role in deterring North Korean aggression, overt U.S. threats have not always helped to moderate the behavior of a proud and paranoid regime obsessed with U.S. power. The good cop/bad cop model of the U.S.-ROK alliance has simply not proven to be an effective means of deterring or coercing North Korea.

Van Jackson is an associate professor at the Daniel K. Inouye Asia-Pacific Center for Security Studies and an adjunct senior fellow with the Center for a New American Security.