Is Orbanism Reaching an Inflection Point? 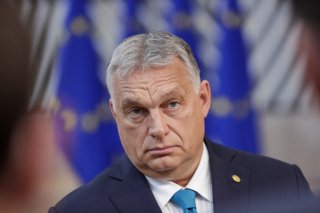 “We will not give up the right to defend our borders, to stop migrants ... we insist that marriage in Hungary is between a man and a woman, a father is a man and a mother is a woman ... and they should leave our children alone,” Viktor Orban told his cheering party during a boisterous campaign season, quietly adding almost as an afterthought that Hungary is not seeking to leave the European Union, but to reform it from within. “After communist bureaucracy, we don’t want new dictates this time from Brussels, and we don’t want to leave the EU at all, they can’t get rid of us so easily,” Orban said. “We want to keep our sovereignty and we don’t want to find ourselves in a united states of Europe, instead of integration.” Incidentally, this mixed message was reciprocated by a mixed message from the EU, which, while nominally supporting Poland from mass migration ostensibly orchestrated by Russia and Belarus, also prepared to fine Hungary for rough treatment of migrants. This comes after the EU also fined Poland a million euros a day over rule of law violations. And as the election campaign season heats up, it becomes more obvious as to which side the European Union prefers to win in Hungary.

It is, however, a paradox of Orbanism, as Orban seeks to balance forces seemingly beyond his power to control. Orbanism, is, of course, under-studied and most of the Western media are either hopelessly partisan to analyze it as a theory, or useful in studying its inherent contradictions. On one hand, Orbanism is somewhat statist, or even Leninist in structure, with a vanguard party controlling and shaping the levers of politics, judiciary, and resources. On the other hand, the party in question is distinctly socially conservative in outlook and reactionary in tactics and approach. But for what his desire might be, Hungary might simply not be capable of taking on the European Machine, and sooner or later the inflection point might be upon Hungarians to decide whether to merge with the Borg, or to follow Britain out.

Consider a paradox. If one seeks democracy, and only pure democracy, where only the mandate of the majority will be worshipped and a distinct ethno-socio culture will be preserved, the place in question needs to be small, low population, and homogeneous. It cannot seek imperial politics, nor can it afford to be a part of an empire. The moment it is big, and part of a multicultural imperial entity, there inevitably will be a pull towards protecting a solid minority right and ethnic balance of power. Minority rights cannot be guaranteed, without an imperial elite, which by definition will be disdainful of both mass democracy and nationalism. So, overall, any expansion, whether economic or territorial will lead to an imperial elite. Alternatively, more majoritarian democracy, on the other hand, will lead to a consistent decline of size, power, and influence, and therefore a weakening of political position and dependence on larger powers and political entities.

This is sort of a natural law of international relations and history provides ample evidence of this law. The more the British Empire turned large and imperial, the more liberal and multicultural it became, alongside a more imperial elite disdainful of not just nationalism in the colonies, but also nationalism within. English nationalism was heavily repressed, and in turn, is what led to Brexit. In modern times, the pro-European and liberal Remain movement castigated its opposition Leavers as “Little Englanders.” The America of Gore Vidal’s “The Golden Age” lost its small-R republican character the moment it turned to a hegemon in the late 1930s. Currently, a Trumpian “no foreign intervention and no immigration” narrow nationalism is frowned upon with disdain by a more imperial internationalist elite, whose rhetoric unwittingly mirrors Walter Bagehot, even when they perhaps do not know who Bagehot was. Orban’s own country was far more multicultural when it was part of an empire, perhaps the most liberal empire in human history; a social compromise that was destroyed post-World War I. The rise of nationalism everywhere, in a paradoxical way, broke down large undemocratic entities, from British Empire, to Yugoslavia, to the Ottomans, Soviets, and Austro-Hungarians.

And this is the heart of contradiction of the Orbanist project, the inflection point, as mentioned is approaching soon. If Orban genuinely wants to preserve Hungarian ethno-socio uniqueness, it needs to channel the project’s latent Schmittianism. Carl Schmitt, for example, famously argued that “Every actual democracy rests on the principle that not only are equals equal but unequals will not be treated equally. Democracy requires, therefore, first homogeneity and second—if the need arises elimination or eradication of heterogeneity.” That is unlikely for as long as Hungary remains a part of an empire, in this case, a thoroughly modern one, the European Union.

The external pressures of the empire and the undemocratic imperial elite from Brussels will constantly attempt to liberalize Orban’s social-conservative model, just as it would institutionalize (a legalist word to denote a class of elite who operate above the dictates and passions of mass democracy) minority rights, which by definition, would go against a majoritarian project such as Orbanism. Arguably, this might also be why Orbanism cannot be replicated word for word directly in a country that is much larger than Hungary, whether it is the UK or the United States. The result is more compromise with credal and federalized politics as any attempt by one side to bulldoze the other side will result in social strife. To have pure majoritarian democracy, whether it is the Swiss, or the Danish, or Hungarian, one needs homogeneity. There’s no difference regarding attitude towards immigration, for example, in all the above-mentioned countries, regardless of their ruling political party’s ideology. They are also all extremely socially homogenous. This is not a coincidence. Homogeneity requires an element of state applied force; a prospect that is unlikely within the current balance of power within the countries of the Anglosphere. The rise of heavy-handed Anglo-nationalism post-Brexit has already resulted in fissures within the union, especially among the Scots and the Welsh. Winds of any ethnocultural nationalism post-Donald Trump in the United States have also resulted in a massive institutional backlash.

The coming election is therefore a stress-test for Orbanism as a viable model. Can the model adapt and survive? It will be a straightforward EU-fication of Hungary if Orban loses, but what happens if Orban wins? For how long can he remain a part of the EU, without being ruled by the EU? Will there be street protests and an attempt towards a forcible color revolution? Can Orban manage the balance between an increasingly imperial EU and a nationalist and culturally cohesive Hungary, without all the Brussels sanctioned and pushed LGBT politics, for example? It remains to be seen. Viktor Orban is, if anything, an astute and pragmatic politician. But structure trumps agency. And the golden rule of politics is that those who pay (in this case, the Western EU core), decide the way.