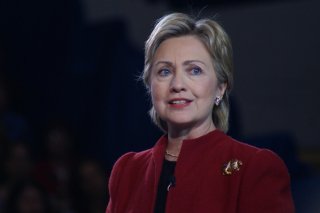 With each new terrorist attack—Orlando is just the latest of a lengthening global string—Hillary Clinton’s presidential prospects sink further. The reason may be traced to the four corners of a “no way out” box that a politically correct Clinton now finds herself trapped in.

At one corner of this box, Hillary is tied at the hip to a president who won’t even utter the words “Islamic extremism.” Hillary herself renounces the phrase “radical Islam”—even as she meekly denounces “violent extremism.” However, as Confucius once said: “The beginning of wisdom is to call things by their proper name,” and American voters are overwhelmingly going to see a far blunter and waterboarding Trump as the wiser (and tougher) one here.

At a second corner of Hillary’s “no way out” box, there is the very real conflict between her support for both women’s and gay rights versus her politically correct views on “religious tolerance.” Says Clinton: “America’s commitment to religious tolerance goes back to the very beginning of our nation, and as you know, we are home to people of all religions.’’

Here, however, is Clinton’s political conundrum: Clinton is supporting an intolerant religion in the name of religious tolerance—and much of the American public knows it. This includes all those American women who Clinton is heavily banking on to carry her to victory. They sure don’t want their daughters donning burqas at the behest of some new American Caliphate.

Here’s the broader inconvenient truth for both Clinton and women’s rights that Trump is more than willing to tell voters: Islam, as it is practiced in most countries around the world, suppresses women’s rights—the only issue is the degree of severity of the repression. In the extreme version, women can’t vote, can’t attend schools, must wear veils, and risk being stoned to death for any number of “sins.”

As for gay rights, there are none in the Muslim world. Zero. Zip. Nada. Instead, homophobia rules the prayer rug roost, “homosexuality is ... punishable by death,” and it is an intolerable and intolerant situation that the tragic Orlando shootings have put an exclamation point on.

The third corner of Clinton’s “no way out” box speaks to a set of American priorities that inevitably place national security at the top of the voters’ list. Trump, for his part, is a pragmatist, and he doesn’t care about offending a billion people thousands of miles away with proposals like a temporary ban on Muslim immigration if it means the American people will be more secure.

Clinton, on the other hand, plays the classic American Civil Liberties Union game in seeking to strike a balance between national security and religious tolerance. This is an electoral game Clinton will surely lose in a post-9/11 world as Trump will again look stronger, tougher, and smarter.

As the fourth and final corner of Clinton’s “no way out box,” there is the war in Iraq as viewed through the prism of Trump’s foresighted opposition versus Hillary’s lemming-like support. Here’s the salient point:

While the Orlando shooter was homegrown, much of the turmoil in the Middle East—and at least some of the hatred of America by Islamic extremists—may be traced to the Bush-Obama wars in Iraq and Afghanistan. Hillary has been complicit in these adventures while Trump understood, as few did at the time, that Bush’s Iraqi gambit had nothing to do with the war on terror and everything to do with taking out Saddam Hussein.

Everyone (except perhaps the editors at the National Review and Weekly Standard) now know that the Iraq War was one of the greatest mistakes and miscalculations in American history, and in this 2016 campaign, there is only one candidate that got it exactly right—and another who got it exactly wrong. It will thus be very difficult for Hillary Clinton to position herself more broadly as superior on national-security issues.

No doubt Clinton will try to make this latest shooting about gun control rather than terrorism. However, that strategy is doomed to failure when implemented in the broader context of this latest massacre of innocent Americans.

For now, let us all simply say a prayer for each of the victims—and maybe even do it in a public school where there are women and girls without veils and gays and lesbians not in fear of their lives.

Peter Navarro is a business professor at UC-Irvine and author of Crouching Tiger: What China’s Militarism Means for the World. He is a policy advisor to the Trump campaign. Reach him at:http://crouchingtiger.net