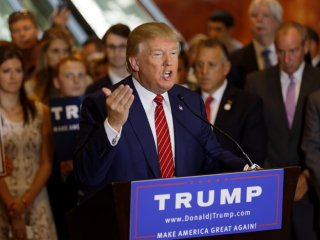 Is Megyn Kelly an agent provocateur? Perhaps more than anyone, including Republican frontrunner Donald Trump, realized until recently. That question wasn’t raised at last night’s Republican debate, but if her 2010 GQ photo shoot is anything to go by, she definitely views the brand as an asset. In two photos that the Washington Post genteelly calls “provocative” and that prompted Republican frontrunner Trump to ding her as a “lightweight reporter,” she flaunts her wares by wearing nothing more than a slip by Dolce & Gabbana, a bra from Agent Provocateur complete with a come-hither look.

Meanwhile, much of the assembled press corps was lining up to defend her maidenly honor by decrying Trump’s refusal to submit himself to questioning by skipping the debate. In what must be a historic first, even the New York Times rushed to defend Fox. It called Trump “childish.”

Actually, he managed to outfox the network’s pooh-bah Roger Ailes who thought he could muscle over Trump. Nothing doing. It was a brilliant move for Trump to skip the debate. He had everything to lose and nothing to gain. He’s managed to depict Fox as a charter member of the media establishment. And in a big rally in Des Moines, he got to burnish his bona fides as the outsider who will stand up to the rest of the crew. Trump won the debate by not showing up to it. He could replicate this behavior in the fall if he wins the nomination.

There’s no law that says he has to show up to debate his Democratic opponent. If it’s Hillary Clinton, he could simply announce that she’s a “loser” and he’s not going to waste his time sparring with her. In skipping the Iowa debate, Trump managed to answer a nagging question. All along the subplot to the Republican race has been: what if Trump had never run in the first place? What would it look like? Now we know. A tonic to insomniacs everywhere. As Dan Balz put it in the Washington Post, “What might have been a lively and spirited evening turned into a tepid affair” and offered “safe and predictable answers.”

What this underscores is that the Republican field is really quite lackluster. The notion that absent Trump the Republican Party would be enjoying a serious and substantive debate on domestic and foreign policy issues is moonshine. The establishment candidates are reiterating the discredited shibboleths of the George W. Bush administration about the war on terror. Marco Rubio, for example, declared that he would tear up the Iran deal on “day one” and rounded on Ted Cruz for exhibiting insufficient avidity for increased defense spending: “As already has been pointed out,” he said, “the only budget that Ted has ever voted for is a budget that Rand Paul sponsored that brags about cutting defense spending.” For his part, Cruz, a walking reminder of Alexander Hamilton’s admonition in the Federalist Papers that we should never “forget that men are ambitious, vindictive and rapacious,” assailed Rubio for exhibiting insufficient avidity for halting illegal immigration.

Then there was Jeb Bush. So earnest, so tentative. If Cruz is the Rottweiler of the GOP, then Bush is its anxious poodle. The best Bush could do was to declare plaintively that America needs “a leader that will fix things and have a proven record to do it.” This is the language of a future commander-in-chief who is going to make American great again?

The truth is that most of the candidates in both political parties are operating on automatic pilot. Trump and Bernie Sanders are the two who have divined that a new political era has begun in which the roiling grievances of working-class Americans can no longer be shunted aside. As Eugene Robinson perceptively observes in the Washington Post today, “these unlikely messengers are showing us how ignorant many of our leaders are about the nation they purportedly serve. . . . Both call for change that is fundamental, not cosmetic or incremental.” Just don’t expect to hear about it at GOP debates, especially if Trump isn’t present. He’s the true provocateur.