Outsourcing the War in Afghanistan Is an Awful Idea 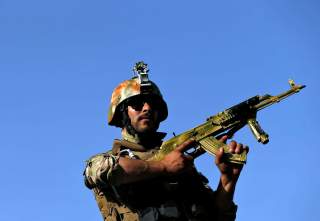 There are no good options on Afghanistan. Experts disagree on whether the current or potential future terrorist threat justifies continuing to spend American blood and treasure in the war-torn country where the Taliban is going from strength-to-strength. The strategy developed to turn things around, which includes increasing the number of U.S. forces by several thousand, is far from perfect. Aggressively pursuing a peace deal with the Taliban or simply playing for time are also unappealing options. As bad as these and other possible options are, however, one is far worse: hiring mercenaries to do the job of U.S. troops.

There are currently 8,400 U.S. troops in Afghanistan. Approximately two thousand of them conduct counterterrorism operations against Islamic State militants and other international terrorists. The rest are assigned to the Operation Resolute Support, where they—along with another approximately six thousand troops from other countries—train, advise and assist Afghan forces fighting against the Taliban. The United States already outsources many support missions in Afghanistan. Now, Blackwater founder Erik Prince and DynCorp International owner Stephen A. Feinberg have concocted a plan for 5,500 private contractors to take over the train, advise and assist mission. According to Prince, the plan would also include a ninety-plane private air force to provide air support to Afghan forces.

The Pentagon hates the plan. So do heavy-hitters on the Hill, like Sen. Lindsay Graham, who has pledged to fight Trump at every turn if he endorses the proposal. National Security Advisor McMaster is not a fan either. So why is Prince’s idea still getting a hearing? Two reasons. First, Steve Bannon, the president’s chief strategist, is chummy with Prince and likes his proposal. Trump’s son-in-law, Jared Kushner, is enamored with the idea as well, according to USA Today. Second, the president appears desperate to avoid any strategy that even vaguely resembles Obama’s approach to Afghanistan. For all the ways in which he likes to live dangerously, Trump also seems reluctant to accept the risks that come with making a decision about what to do in the war-torn country. Out-of-the-box thinking about Afghanistan is welcome, but this plan never should have gotten to the president’s desk.

One of Prince’s main selling points is that contractors are cheaper than U.S. troops. The United States could save money while continuing to support the war effort against the Taliban, or so the argument goes. Contractors do not enjoy the same support systems as U.S. troops and so they cost less on paper. However, without proper oversight, which would be almost impossible to conduct from afar, the government would not be able to guard against waste, fraud and abuse. At best, outsourcing the war effort would save some money. But there are other costs that would be damaging to U.S. interests.

There is no reason to think a contracted force would be any more effective than the current Operation Resolute Support and plenty of reasons why it likely would be worse. As my colleague Phil Carter observed, the evidence from Afghanistan and Iraq indicates that contractors fared no better than troops when it came to advising foreign forces. However, because they operate outside of the military chain of command, it is much harder to hold them accountable. Firing a military officer ends his or her career. A contractor who is let go can move on to another private-security company. That’s the nature of being a mercenary.

It gets worse. Research tells us that turning contractors loose in a failing state like Afghanistan is a recipe for greater and more indiscriminate violence that could benefit the Taliban-led insurgency. Because the United States is prohibited by law from employing contractors to serve in a military combat role Prince wants to place them under Title 50, which governs classified operations. This would make it much more difficult to hold accountable any contractors who commit crimes and seriously hamper congressional oversight.

Anyone who remembers the 2007 incident when contractors from Blackwater mowed down seventeen unarmed Iraqi civilians in a Baghdad traffic circle will understand why this is a bad idea. A year later, Blackwater won a $20 million subcontract to train Afghan security forces. Some of the contractors it hired to do the job stole hundreds of weapons they were not authorized to carry. After the convoy they were traveling in got into a traffic accident, two off-duty Blackwater guards used their unauthorized weapons to kill several Afghan civilians in the vicinity.

Prince is not content with outsourcing the military mission. He also wants Trump to appoint a viceroy who would control policy in Afghanistan and Pakistan. This person would have authority not only over the military, but also U.S. ambassadors in both countries and the Afghan military to a large extent. In short, Prince wants nothing less than to create a parallel foreign-policy structure and military hierarchy that exists outside official channels. This would have long-lasting and deleterious effects on the State Department, the Defense Department and the U.S. military that would extend far beyond South Asia. There is no question that these entities could do with some reforms. But blowing up huge parts of the national-security bureaucracy so that Erik Prince or one of his compatriots can line their pockets and live out their Douglas MacArthur fantasies is the height of folly.

Creating a viceroy vests enormous power in one individual, while simultaneously setting that person up for failure. To begin with, Afghanistan and Pakistan do not exist in a vacuum. Solving the conflict in Afghanistan also requires engaging numerous other countries in the region. Would the viceroy own policy toward China and Russia too? One hopes not, in which case it is easy to imagine the difficulty he or she would have coordinating diplomatic initiatives. A viceroy would also struggle to integrate with the vast U.S. interagency, leaving him or her disconnected from all manner of bureaucratic support. This would include connectivity with civilian and military intelligence agencies, leaving Prince’s contracting force and the Afghan forces bereft of critical support these agencies provide.

Coordinating with allied forces would also be much more difficult, presuming that countries currently to Operation Resolute Support did not withdraw all their troops. If so, then the United States would be attempting to substitute 5,500 contractors for over twelve thousand U.S. and foreign forces. Outsourcing the war also sends a pretty unambiguous message to our Afghan partners and to every other actor with a stake in the conflict that we’ve got one foot out of the door. This will make cooperating with partners and coercing rivals more difficult.

Perhaps in a bid to give his proposal an air of intellectualism, Prince suggested that the British East India Company should be the model for U.S. operations in Afghanistan. This is a bit ironic since, as one noted scholar of the East India Company observed, its failings ultimately led the British government to take over all of its operations. There is another problem with this analogy besides Prince’s poor grasp of history. The East India Company was an instrument of British colonization in South Asia. This is probably not the right message to send in a country where the United States is already fighting the perception that it is an occupying force. One can only imagine the field day that the Taliban, Islamic State, Al Qaeda and others would have.

The most glaring danger of contracting out the war effort is that any private company will confront a conflict between the pursuit of U.S. national interests and attention to its own corporate interests. If a private firm is making money from the train, advise and assist mission, then this might create incentives to prolong conflict for the sake of profit. As bad as this would be, the situation could become even more hazardous for U.S. interests if the private-security firm or viceroy chosen to oversee the mission was involved in—or pursuing—business interests with rival nations.

For example, in addition to running Academi (Blackwater rebranded), Erik Prince is the chairman of Frontier Services Group, which is a security-and-logistics company with intimate ties to China's largest state-owned conglomerate. The group is helping China on its One-Belt One-Road Initiative, which entails billions in infrastructure investment across numerous countries, including Afghanistan. If the Afghan war effort was privatized and Prince were put in charge, maybe he would divest himself of any holdings that could constitute a conflict of interest. Would other Academi leaders do the same? Would there be a moratorium on seeking future international contracts or on collaborative ventures with other private firms that work with other countries? Similar questions could be asked about Feinberg and DynCorp International if it were to win the contract.

Potential conflicts of interest would be impossible to avoid for any privately owned military force. These types of conflicts do not stop at the top of the corporate pyramid either. As Sean McFate, an ex-military contractor who has written extensively on private armies, observed, there will be plenty of opportunities for people recruited to go “off contract.” This does not mean that Pakistan, Russia, China or Iran would hire away the entire force, but they could entice some contractors to serve their interests rather than America’s.