As Pakistan’s Sharif Visits, Washington Should Leverage Gains in Pakistan 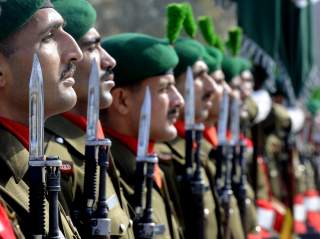 This week, when Pakistan’s Prime Minister Nawaz Sharif arrives in Washington on an official visit, the Obama administration has an opportunity to push forward an often tumultuous bilateral relationship with a partner that is finally getting its act together in many critical ways.

Pakistan’s challenges in overcoming corruption, extremism, misgovernance, and poverty will be a generation-long struggle. But the country is on an upward trajectory, with discernable progress in moving toward becoming a rarity in a chaotic region: a pluralistic Muslim democracy capable of securing itself from internal and external threats, with plummeting levels of terrorism and sectarian violence, home to a thriving market economy.

It is the pursuit of this end state, which would be a win-win for America and the Pakistani people, that should anchor U.S. policy toward Pakistan, a nuclear power and the world’s second-largest Muslim country.

Relations Deteriorate and Then Stabilize

Prime Minister Sharif’s arrival in Washington symbolizes a turning point in what has been a long, circuitous journey for the United States, Pakistan and himself.

In 1999, during his second tenure as prime minister, Sharif made an emergency trip to Washington, holding a rare meeting with President Bill Clinton on July 4th as part of a bid to end the mini-war between India and Pakistan in Kashmir. Months later, Sharif was ousted from power by army chief General Pervez Musharraf.

In late 2007, Sharif returned to Pakistan, in spite of U.S. opposition to him. Washington was wedded to the idea of a political alliance between Gen. Musharraf and former prime minister Benazir Bhutto, who was seen as a political liberal strong on terror.

In 2011, while Sharif’s Pakistan Muslim League–Nawaz (PML-N) was on the opposition benches, relations between Islamabad and Washington deteriorated.

The year began with the killing of two Pakistanis on a Lahore street by a CIA security officer. Months later, the U.S. conducted a special operations raid deep inside Pakistani territory, killing Osama bin Laden, humiliating Islamabad and heightening resentment in Washington toward what many saw as Pakistan’s duplicitous approach on terror.

The year ended with the killing of 24 Pakistani soldiers by U.S. forces at the Salala check post along the border with Afghanistan. While Washington said the attack was a mistake, Pakistan shut down the Pakistan-based NATO supply route into Afghanistan, and it took months for the Obama administration to issue an apology. During this time, Pakistan also purged the country of most declared and undeclared CIA case officers.

Diplomats in both countries kept bilateral relations in a holding pattern, preventing a crash. In 2013, Sharif returned to power for the third time and made an official visit to Washington. Sharif’s party was seen in by many in Washington as a step up from his corrupt and inept predecessors. The two governments also began to discuss, and even coordinate, on the peace process in Afghanistan.

As relations between Islamabad and Washington have improved, so have the conditions on the ground in Pakistan.

Pakistani democracy is showing unprecedented signs of resilience. While the army continues to have an oversized, extra-constitutional role in shaping foreign and national security policy, the PML-N government is standing on its own two feet, and retains autonomy to determine non-security policy, including education, energy and the economy.

Importantly, Sharif’s PML-N withstood opposition protests in the capital last year, which are believed to have been backed by a group of retired and retiring army officers. The PML-N not only continues to rule at the center, but also in the largest province, Punjab. The party emerged victorious in hotly contested by-elections this month in Lahore. At the same time, public sentiment toward the democratic system is positive. According to a survey conducted in the summer, 66 percent of respondents view the democratic system favorably. And Sharif is the country’s most trusted politician.

A second consecutive transition of power from one democratically elected government to another is likely (though not guaranteed) in 2018, when the next general elections are scheduled. Long-delayed local government elections will be held in the two largest provinces later this year, helping strengthen the country’s democratic foundation.

Pakistan’s economy is on sturdier ground, after having avoided default in 2013. Since then, Pakistan’s GDP growth has risen, sustaining in the admittedly modest range of 4 percent. But in a sign of confidence in Pakistan’s fortunes, China is investing upwards of $46 billion in an economic and energy corridor that will connect its western regions to Pakistan’s Arabian Sea port of Gwadar.

The KSE-100, the main index in Pakistan’s largest stock exchange, continues to break record highs. The index has risen over 20 percent in the past year and has tripled since 2012. The commercial and residential real estate market continues to boom alongside a thriving domestic consumer market. The Karachi-based Dolmen City launched South Asia’s first publicly-traded real estate investment trust earlier this year.

A major contributor to Pakistan’s brighter prospects has been a vastly improved security environment. The days when Al Qaeda and the Pakistani Taliban could bomb a major hotel in the capital are part of the past. Al Qaeda has truly been decimated in Pakistan, thanks to a combination of Pakistani police and military raids nationwide together with U.S. drone strikes in the Federally Administered Tribal Areas.

Civilian deaths from terrorist attacks in Pakistan are at a nine-year low, despite worsening security conditions in neighboring Afghanistan. A separatist insurgency in Balochistan, where the economic corridor with China will begin, is on the wane. Top separatist leaders based abroad have opened lines of communication with Islamabad, and one of the few leaders to continue the fight, Allah Nazar Baloch, is likely dead.

Sectarian attacks are down significantly, despite Sunni-Shia strife plaguing the region. The drop in sectarian and terrorist violence is due to a relentless, nationwide crackdown on anti-state militants by the civilian and military security forces. But it is also due to Pakistan having learned from the mistakes of its past. Pakistan appears to have consciously decided to insulate itself from the regional sectarian war.

Despite strong pressure from Riyadh, Islamabad refused to join the Saudi-led war in Yemen. Pakistan is building ties with Iran, Qatar, and Russia—clear evidence of its shift toward a more flexible and pragmatic foreign policy.

Topping the agenda for the Sharif visit will be the ongoing conflict in Afghanistan, which intensifies as the Afghan Taliban spread and the central government falters. President Barack Obama’s decision to maintain the modest U.S. troop levels in Afghanistan into next year extends the lifetime of the Kabul regime, but it will do little to defeat the insurgency.

A military solution to the conflict in Afghanistan is impossible. And so Obama and Sharif must explore ways Pakistan can pressure the new Afghan Taliban leader, Mullah Akhtar Mohammad Mansoor, to the negotiation table. An opportunity for a restart in negotiations may come in the winter, when the fighting season ends. Mansoor is on his way toward consolidating control and appears have been able to mitigate the rate of defections to more extreme splinter groups and the so-called Islamic State.

Another regional threat is the risk of nuclear conflict between India and Pakistan, which perpetually looms over the subcontinent. Obama administration officials are floating a potential deal to have Pakistan voluntarily halt the expansion of its nuclear arsenal, particularly the development and deployment of so-called tactical nuclear weapons, in exchange for mainstream acceptance into the Nuclear Suppliers Group.

Preventing the expansion of Pakistan’s nuclear stockpile would be a real win for the non-proliferation community. But Pakistan’s nuclear program cannot be divorced from that of India. Thanks in part to a 2004 civilian nuclear deal with the United States, India retains a sizable latent capacity to expand its own nuclear stockpile. Pakistan’s insecurity toward its larger neighbor stems from this reality and others: the two countries have fought three wars, India helped Pakistan’s eastern half secede in 1971, and a dispute over the Kashmir region has lingered on since 1947.

The Obama administration ought to nudge the hardline Modi government in New Delhi to re-engage Islamabad in the Composite Dialogue—a comprehensive discussion of all outstanding issues between the two countries.

At last month’s U.N. General Assembly session, Prime Minister Sharif proposed a four-point peace initiative with New Delhi, along these lines. Given the current civil-military balance today in Pakistan, it is clear that Sharif’s India peace plan has the endorsement of the Pakistan Army. Indeed, the reported appointment of a recently retired general as national security advisor is indication that the army believes negotiations for settlements to conflicts in Afghanistan and Kashmir will soon resume.