Pakistan Embraces Multipolarity—and That Might Be Good for America 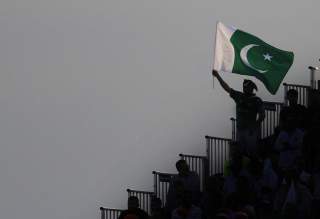 Over the past two years, Indian and pro-Indian commentators have argued that Pakistan is “diplomatically isolated.” This claim has less to do with reality and more to do with the fact that isolating Pakistan is an Indian foreign-policy goal.

In September 2016, Indian prime minister Narendra Modi, referring to Pakistan, declared: “We will isolate you. I will work for that.” Within weeks, op-eds appeared asserting that Pakistan was diplomatically isolated. Declaring “mission accomplished” is, of course, the fastest path to “victory,” but it doesn’t necessarily mean that one actually has won.

In reality, Pakistan was never quite diplomatically isolated. And it certainly isn’t today. Bilateral relationships go through ups and downs, especially in the present topsy-turvy world order. With the breakdown of unipolarity, it’s actually quite hard to isolate a country. There are just too many options in this era of diplomatic free love.

For its part, Pakistan has been adept at pivoting between various regional centers of power, building relations with Russia, bolstering ties with China and Turkey, and developing partnerships with important regional players like Jordan and Qatar. Pakistan’s move toward diversification in a post–American world order is reflected in its military hardware acquisitions (and, to a lesser extent, sales) and in its diplomatic ties.

Since the downturn in U.S.-Pakistan relations in 2011, Islamabad has actively sought to diversify its foreign partnerships. Perhaps the most successful of these ventures has been Islamabad’s relationship with Moscow, a historical ally of rival New Delhi. As the United States progressively closed space for military aid to Pakistan, Russia lifted a ban on military sales to Pakistan, enabling the sale of attack helicopters. Sales of additional advanced hardware could be on the horizon. The policies of both countries toward Afghanistan have also converged.

The visit last week of a ministerial-level Pakistani delegation to Moscow—including Pakistan army chief Gen. Qamar Javed Bajwa and a representative from Pakistan’s space program—roughly coincided with the departure of a delegation from Saint Petersburg from Pakistan, where multi-sector economic cooperation was discussed. Sanctions on Russia have slowed energy sector cooperation, but defense and diplomatic cooperation has steadily grown, including joint military exercises. Russia has recognized Pakistan as a “geostrategically important country.” These are important words for Islamabad to hear after being treated as a mix of a failed state and war on terror subcontractor by Washington.

For much of the post–9/11-era, the U.S.-Pakistan dynamic has involved American officials telling Islamabad that it must “do more” to combat terrorist networks and their Pakistani counterparts replying with something to the effect of: “Yes, but . . .” U.S. officials came to see the qualified “yes” as a reflection of Pakistani confusion or duplicity. But the lack of clarity was at least in part the byproduct of asymmetry. Pakistan was responding to the United States from a position of weakness and had little strength to provide a downright refusal. Multipolarity has not only empowered Pakistan to say “no” to more powerful countries, it’s also enabled it to publicly articulate and adhere to a more clear and consistent foreign policy.

Take the case of Pakistan’s relations with Saudi Arabia. In 2015, Islamabad denied Riyadh’s request to deploy combat troops for its Yemen campaign. Pakistan said that it would assist with the security of long-time ally Saudi Arabia, but would not deploy its troops outside Saudi territory as part of such an effort. Pakistan’s relationship with Saudi Arabia and the United Arab Emirates took a hit as a result of Islamabad’s refusal — a decision that turned out to be prudent given Pakistan’s history of sectarian conflict and the awful way the Saudi-led campaign has turned out.

But Pakistan’s answer of “no” to Saudi Arabia’s request to aid in the Yemen war is not the end of the story. Islamabad not only clearly defined the limits for military cooperation with Riyadh, it has also since patiently demonstrated that there is much that can be done within that space.

Last year, Pakistan’s former army chief, retired Gen. Raheel Sharif, assumed leadership of a Muslim counterterrorism alliance led by Saudi Arabia. Since then, bilateral and multilateral air, land, and sea exercises involving Pakistani and Saudi forces have also accelerated. And this March, the Pakistan Army announced the deployment of additional troops to Saudi Arabia on a “train and advise” mission. According to Pakistani defense minister Khurram Dastgir-Khan, the new deployment of around one thousand Pakistani troops to Saudi Arabia would be on top of the 1,600 or so personnel in the country.

The rehabilitation of Pakistan-Saudi Arabia ties has not resulted in Islamabad siding with Riyadh in its regional wars. Pakistan has maintained neutrality in the Saudi-Emirati dispute with Qatar. And it has also improved ties with Iran, stepping up cooperation to secure their porous border. Before Pakistan formally announced the new deployment of troops to Saudi Arabia, the Pakistan Army chief Gen. Bajwa informed Iranian, Qatari and Turkish officials of the move.

While Pakistan has been mindful of Iranian sensitivities, it has neither given it a veto power over its Mideast policy, nor has it shied away from engaging Tehran more assertively when necessary. For example, in 2016, Pakistan exposed an Indian spy operating a network targeting Pakistan from Iran’s Sistan-Baluchestan province. The Pakistani announcement coincided with the visit of Iranian president Hassan Rouhani to Islamabad. Amid the tumult in the Middle East, Pakistan’s foreign policy toward the region has been pursued through nonexclusive bilateralism as it avoids siding with a particular bloc.

‘No’ to Endless War in Afghanistan, ‘Yes’ to Peace and Stability

Just like with the Saudis, Pakistan has learned to say “No, but…” to the United States. The broader message is the same: we can help you, but only in ways that don’t hurt us.

Since the announcement of Trump’s “South Asia strategy” last year, Pakistani officials have consistently said that the Afghanistan war “cannot be fought on Pakistani soil.” This is a clearer articulation of a statement in 2015 by then-Prime Minister Nawaz Sharif, in which he told a U.S. audience that Pakistan “could not bring the Taliban to the negotiating table ‘and be asked to kill them at the same time.’”

Pakistan, in clearing most of its territory of anti-state jihadist networks—contributing to a massive decline in terrorism on its soil after 2013—has reduced space for Afghan insurgents operating in Pakistan, who have been moving to Afghanistan, where they control or contest roughly half of the country. Last October, Pakistani journalist Tahir Khan reported that Taliban commanders linked to slain Taliban leader Mullah Akhtar Mansour had moved to southern Afghanistan. And this January, Sayed Hamed Gailani, an Afghan leader from a prominent Pashtun family, said that “most” of the Talban leaders are in Afghanistan.

Much of the Afghan Taliban insurgent leadership likely still resides in Pakistan. However, it should be noted that the main anti-state jihadist networks targeting Pakistan are sheltered in Afghanistan and provided cover fire by Afghan forces as they launch attacks on Pakistani border posts. In fact, Mullah Fazlullah—he’s not only the most prominent anti-Pakistan militant leader, but also ordered the shooting of Malala Yousafzai—has been based in Afghanistan since 2009.

Insurgents, alongside Afghan families, laborers, students and traders, move back and forth across the chaotic border on a daily basis. CIA drones and JSOC raids won’t provide an enduring solution to the cross-border, bidirectional flow of militants. U.S. policy remains incoherent and overly dependent on kinetic action. It is intensifying a counterproductive air campaign in Afghanistan and pumping in military hardware, much of which is seized by the Taliban and then used to kill U.S.-backed Afghan security forces in record number.

Pakistan has prioritized border management and refugee repatriation—the Afghan Taliban live among Afghan refugee populaces in Pakistan—as structural solutions to the problem of the Afghan insurgency. Recent statements by Afghan president Ashraf Ghani and others suggest that Afghan and U.S. officials may be taking these issues seriously. But Afghan forces show greater fervor in targeting Pakistani border posts than in combatting Afghan Taliban insurgents. And U.S. officials seem to want Pakistan to kill senior Taliban figures, rather than push them into the dialogue process.

In February, it was reported that the United States has essentially demanded that Pakistan kill “a dozen top militants.” Since then, there have been conflicting indications about U.S. flexibility vis-à-vis the “kill list.”

For its part, Pakistan has, according to a former senior Talban official, “increased pressure on the Taliban” and “detained some senior Taliban leaders” to push them to talk to the Kabul government.

Pakistan has good reason to stand its ground. Afghan president Ashraf Ghani recently made an admirable, comprehensive offer of talks to the Taliban. But it may be too late. The situation in Afghanistan is extremely tenuous. Elections scheduled for this year and next are rife with uncertainty and will likely reignite ethnic tensions that have temporarily eased. It makes little sense for Pakistan to commence hostilities with the Afghan Taliban, especially as Washington has yet to demonstrate its seriousness about talks and that it will be a good-faith negotiator.