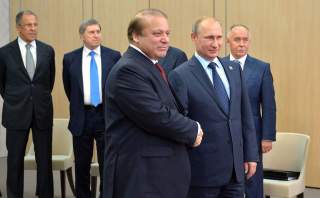 A country’s geographical location and strategic significance, despite its internal incompetency and inadequacy, can attract regional or extra-regional players. Case in point is Pakistan. While dealing with decades-long homegrown malfunction like corruption, bad governance, load shedding, militancy and political hassles, it still holds strategic geography with plenty of ingredients to appeal to global powers.

In the past few years, rumors have been roaming about that Islamabad’s foreign policy is nothing but a disaster. The United States’ Indian romance — it not only signed several economic ventures but also concluded defense agreements such as the 2016 Logistics Exchange Memorandum of Agreement and the Indo-U.S. Nuclear Deal in 2008 — hints at a shift in South Asian policy and a possible goodbye to Pakistan. Moreover, Washington’s “do more” demand has again surfaced and its discomfort with Islamabad is evident from the cuts in military aid (Coalition Support Fund) and its refusal to subsidize the purchase of F-16 aircrafts. The United States has also employed pressure on Pakistan after the Mumbai Attacks of 2008 and Uri Attack of 2016, demanding Pakistani cooperation with India in hunting down the perpetrators of these incidents.

The other signs of isolation stem from Islamic countries like Saudi Arabia and Iran. Saudi Arabia kept cordial connections with Pakistan in times of trial and has been lending a hand in tackling financial woes. However, the Saudis have found it hard to digest Pakistan’s decision to remain neutral in the Yemen war. Although there was no dramatic response from Riyadh, the level of bilateral engagements has shrunk. Earlier this year Saudi King Salman bin Abdul-Aziz Al Saud warmly welcomed Prime Minister Modi and showed a possible tilt towards New Delhi and against traditional ally Pakistan. Non-payment of dues and detention of thousands of Pakistani laborers in Saudi Arabia can also be seen as Saudi discomposure with Islamabad.

Iran may not be as valuable a contributor to Pakistan, but it is still significant since it shares a long border with Pakistan. Tehran, in its latest bid to come back to the international arena after the successful conclusion of the nuclear deal with the West, is employing all obtainable means for fostering regional trade. Iran and India signed a $500 million agreement under which both will work in the assemblage of the Chabahar port of Iran. Chabahar is not as important as the Gwadar port of Pakistan, but it still can become a major competitor to Pakistani aspirations for taking the lead as a regional trade route provider.

Pakistan is host to 3 million Afghan refugees and it recently extended the stay of refugees until December 2017. Additionally, Islamabad could offer a political solution to the Afghan imbroglio, though the current Afghan President Ashraf Ghani is eager to establish more affable terms with New Delhi. Indian aid to Afghanistan has surpassed $2 billion together with defensive agreements.

This picture makes it easy to believe that Pakistan is really facing international isolation. However, the last month witnessed some significant developments that have mitigated Islamabad’s isolation to a considerable extent. The most striking development was the first ever Pak-Russia military drill which commenced in Pakistani territory at a time when Indo-Pak tensions are on the rise. Russian troops landed in Pakistan despite repeated propaganda from the Indian side that Moscow has cancelled joint exercises in a bid to please India. This is a major innovation in Islamabad’s Moscow connection in a period when Washington’s allegiance to India is expanding. This joint drill seems to be a continuation of Pak-Russia military ties that are growing since the visit of Russian Army Chief General Vladimir V Chirkin to Pakistan in 2013 and Naval Commander Admiral Viktor V Chirkov in 2014.

China meanwhile has come to revamp the feeble Pakistani economy with the injection of $51 billion through the China-Pakistan-Economic-Corridor (CPEC). Beijing is not only empowering Islamabad to make this joint venture materialize despite some political hassles and security issues, but it is equally supportive of the Pakistani defense narrative. Twice in 2016, China vetoed the Indian resolution in the UN labeling Pakistani citizen Massod Azhar a terrorist — an endorsement of the Pakistani stance and a serious blow to New Delhi.  Additionally, Beijing plunged into burgeoning Indo-Pak tensions after the Uri Attack and emphasized the need to start a dialogue.

There was an uproar in Pakistan in response to India’s decision to invest in Chabahar. Many felt that this strategic and economic move by New Delhi could allow it to wield pressure against Pakistan from the southwestern border. The Indo-Iran joint endeavor is materializing but a surprising development arose when Tehran expressed an interest to partake in CPEC. Iranian President Hassan Rouhani, on the sidelines of the 2016 UNGA meeting, told Prime Minister Nawaz Sharif that Iran wants to be part of CPEC.  Last week, the Consul General of Iran Mohammad Hossein Bani Assadi also confirmed that “CPEC is a great economic development project and Iran wants to be part of it.”

Where Islamabad should really feel like it is in hot waters is Afghanistan. Indian diplomatic, economic and lately defensive maneuverings inside Afghanistan put Pakistan in a difficult position. However, since Afghanistan has not been able to tackle its internal political strife, the Taliban-led militancy, and its weak economic fabric; it actually is not in a position to really intimidate Pakistan. Despite being the recipient of substantial economic aid from India and the international community, Afghanistan in many ways is still dependent on Pakistan for smooth economic going.

It may be an Indian desire to isolate Islamabad — as expressed by Indian Prime Minister Narendra Modi — but Pakistan is not completely out of the scene, either regionally or internationally. In fact, the current government has put the country back on track; economically as well as on the foreign front. Islamabad has brought huge Chinese investment and genial ties with Russia at the same time that the Pakistani military is wiping out decades-old militant movements. These vibrant civil-military efforts are just the dawn of a bright future.

The writer is Faculty Member in Department of International Relations at University of Gujrat Sialkot Campus. He was July 2016 Visiting Fellow at the Henry L. Stimson Center in Washington DC. He tweets @DaimFazil.