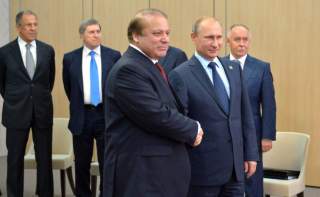 Surprisingly, Moscow and Islamabad are also in the initial phases of talks on the sale of the Sukhoi Su-35 fighter jet, a long-range combat aircraft that would enhance Pakistan’s ability to conduct  maritime patrols and penetrate deeper into enemy territory. The export of the Su-35 will provide a real test of the extent to which Russia is willing to depart from its historic alliance with India. Pakistan is also exploring the purchase of a range of other Russian defense hardware, including the Yak-130 combat trainer aircraft.

Pakistan and Russia are also intent on enhancing economic ties. They are close to finalizing a $2-2.5 billion pipeline deal that would transmit natural gas from the port city of Karachi to Lahore, Pakistan’s second largest city. Russia may also join Tajikistan and Kyrgyzstan in the CASA-1000 energy project, providing Afghanistan and Pakistan with electricity.

For several years, Moscow has been rumored to be interested in either providing the Pakistan Steel Mills with a cash infusion or purchasing a stake in the state-owned enterprise. Pakistan aims to privatize the company by the end of this year, and we may see Russian companies get into the mix.

Toward a Strategic Partnership?

All is not well between India and Russia. Recent defense sales by Moscow to Islamabad signal the former’s discontent with New Delhi. Russia may have also colluded with China to obstruct India’s path to permanent membership in the United Nations Security Council (UNSC).

But India and Russia are unlikely to make a complete break with the past. India will remain a major defense partner of Russia. Indian Prime Minister Narendra Modi will visit Moscow this December. The two countries may push forward deals to purchase or co-produce the fifth generation Sukhoi T-50 fighter and they will continue cooperation over the development of strategic weapons. New Delhi might also purchase T-90MS tanks from Moscow.

While defense cooperation between Moscow and New Delhi will continue, they appear to be less bound by a common regional strategy. Meanwhile, China is making a formidable entry into Central and South Asia, mainly in terms of trade corridors, but also in respect to forging peace in Afghanistan. Its development of the Gwadar port in Pakistan, along with the sale of eight submarines to Islamabad, may pave the way for a more assertive Arabian Sea and Indian Ocean strategy.

Is there a space for Russia in all this? Commentators in India and Pakistan have referred to a possible China-Pakistan-Russia strategic alliance, including in the maritime theater. But this may be more of a reflection of Pakistani aspirations and as well as Indian insecurity and lack of analytic restraint.

What we are more likely to see is India and Russia continuing to act more autonomously of one another. But India will have to learn to adjust to Russia’s new-found fondness for Pakistan. If it has difficulty in doing so, there is risk that we may be entering a period in which India’s tighter embrace of the United States brings Russia closer to Pakistan, and Russia’s bolstering of ties with Pakistan brings India closer to the United States.

Pakistan’s successful wooing of Russia is one example of its ability to deftly navigate the complexity of a G-Zero world, in which there are multiple centers of gravity and no sole country or alliance is able to “drive an international agenda.” With strong or growing ties with all permanent UNSC members as well as regional powers like Iran, Qatar, Saudi Arabia, and Turkey, Pakistan is becoming what geostrategist Ian Bremmer calls a “pivot state.” For a country that faced potential global isolation in 2011, Pakistan’s growing list of friends is a testament to its diplomatic prowess and a civil-military consensus to push these relationships forward.