Pakistan’s Prime Minister Has Been Sent Packing. So What’s Next? 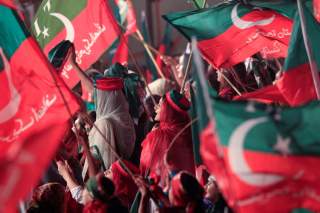 For Nawaz Sharif, the third time was definitely not the charm.

On July 28, Pakistan’s Supreme Court disqualified the Pakistani prime minister, thereby preventing him from serving out his full term, which was scheduled to end next year.

Sharif has served as Pakistani premier two other times, and in both cases, he was forced out prematurely. In 1993, he lost his job after the Pakistani president—a largely ceremonial position today, but a powerful one back then—dissolved Sharif’s government. Six years later, he was overthrown in a military coup. This time around, Sharif was dismissed after a long investigation stemming from revelations in the Panama Papers that Sharif’s children harbored offshore assets.

And yet, it’s not the Panama Papers that sent Sharif packing. Rather, the Supreme Court cited Articles 62 and 63 of the Pakistani Constitution—clauses instituted by military dictator Zia ul-Haq in 1985. They stipulate that any lawmaker deemed dishonest or untruthful can be removed from power. In its ruling, the court declared that Sharif had failed to disclose his employment with a Dubai-based company owned by his son when submitting his paperwork to contest the 2013 elections, which propelled him into power for his third term.

In a nation as divided as Pakistan, reactions to the Supreme Court judgment have been predictably split. Supporters of the ruling Pakistan Muslim League-Nawaz (PML-N) party, as well as occupants of Pakistan’s small liberal sphere, have denounced the verdict as arbitrary and unfair. He was booted from power not because of corruption charges, they note, but rather for failing to declare $2,700 in monthly income from a side gig (income Sharif insists he never received). Surely, so the narrative goes, other Pakistani officials—both in government and the military—have committed far more egregious transgressions. So why have they not been held accountable? Some opponents of the Supreme Court decision believe the Supreme Court—perhaps with the tacit approval of the powerful Pakistani military—engaged in inappropriate judicial overreach.

However, many others—particularly members and supporters of the main opposition party, Pakistan Tehreek-i-Insaf (PTI), as well as anti-corruption proponents and common citizens around the country—take a very different view. This is democracy in action, they declare: An elected official held accountable for misdeeds and forced to pay the ultimate political price—a refreshing change from all the Pakistani leaders who have done very bad things and eluded justice. Many Pakistanis are convinced that Sharif and his family are corrupt, even if corruption isn’t the reason he was ousted.

In effect, the Supreme Court has delivered its verdict. But within the court of public opinion, there’s a major split as to whether the verdict represents selective justice or justice served.

There are two clear winners. One is the PTI. This party, led by cricketer-turned-politician Imran Khan, accused Sharif of vote rigging in the 2013 election and had called for his ouster practically from the day he took office. “Go Nawaz Go,” a ubiquitous rallying cry, has been the constant soundtrack for the party’s advocacy. The PTI’s core objective has been achieved, and with flying colors.

The other winner is the Pakistani military—an institution that has often sparred with Sharif. In recent years, it has taken issue with his relatively conciliatory position toward India, and with his desire to put Musharraf on trial for treason. The army may not have orchestrated Sharif’s ouster, but it certainly won’t shed any tears now that he’s gone. Additionally, with civilian officials caught up in transition matters for at least several weeks, the military should be able to consolidate its already-formidable influence in state affairs. And it could enjoy an added bonus: Sharif’s intended replacement, his brother Shahbaz, is believed to be the more pro-military sibling.

In short, the Pakistani military now finds itself in a familiar position—firmly ensconced in the catbird seat.

The good news? A smooth, peaceful transition of power is in order. The PML-N has already announced its plan: Shahid Khaqan Abbasi, the petroleum minister and a legislator with close ties to the Sharif family, will serve as interim prime minister while Shahbaz Sharif goes through the process of getting elected to parliament (in a parliamentary system like Pakistan’s, the premier must be a legislator). That process should be a formality, given the PML-N’s strong legislative majority. Once Sharif becomes a parliamentarian—likely within the next two months—he will formally take office and serve out the remainder of his brother’s term while the party prepares for national elections next year.

It’s in the current transition period that Pakistan’s democratic progress will be thrown into the sharpest relief. In decades past, if a civilian leader was abruptly removed, the expectation would be that the army would swoop in to restore order. Yet today, no serious observer of Pakistan expects the military to seize power. Of course, given the deep clout that the military already enjoys behind the scenes, it has no need to take power directly—and likely no desire either, given the arguably unprecedented nonsecurity policy challenges, such as severe water shortages and a serious energy crisis, that afflict present-day Pakistan.

Not only should the PML-N serve out its term, but it could also—to the horror of its bitter PTI rivals—be well positioned to compete strongly in next year’s election. Indeed, Sharif’s ouster does not automatically put Imran Khan on the fast track to the prime ministership—far from it.

Admittedly, the PML-N does face some difficult days ahead. It must pick up the pieces from Sharif’s ouster and restore party unity. On the eve of the verdict, a key PML-N official, Interior Minister Chaudhry Nisar, expressed deep unhappiness about the party’s direction. He threatened to resign, before abruptly changing course. Additionally, the PML-N faces fresh legal challenges. The Supreme Court has called for a criminal investigation of Sharif’s children—and ordered another probe to look into the financial assets of Finance Minister Ishaq Dar.

And yet, consider the PML-N’s rivals. The once-mighty Pakistan People’s Party (PPP), which ran the previous national government, fared poorly in the 2013 elections and is now a shadow of its former self.

By contrast, the PTI is a formidable competitor. Its popularity—at least in the short term—should increase in the aftermath of Sharif’s dismissal. One of its core constituencies—the young, urban middle class—is a fast-growing demographic. However, the PTI doesn’t boast the national clout of the PML-N. Its bastions are limited to urban spaces of Punjab, Pakistan’s most populous province, and to the province of Khyber-Pakhtunkhwa, where it runs the government.

The PTI may be a victim of its own success. It rejects and refuses to emulate a deeply entrenched patronage system that has made older parties like the PMLN so strong. This staunchly anti-status quo position—which taps into deeply held grievances in Pakistan about corrupt and dynastic politics—has helped fuel the PTI’s popularity. And yet, it’s this very patronage system that best positions parties to win elections in today’s Pakistan.

The PML-N may be battered and bruised, but it should live to see many more days—though with a caveat. If legal investigations produce damaging verdicts against PML-N officials or their families, then all bets about the party’s political prospects could be off. The PTI could capitalize on such setbacks, galvanize more supporters around its message of clean governance, and conceivably score an upset election victory.

All this inside baseball about Pakistani politics is largely immaterial for U.S. officials, whose attention is consumed by other matters—from the North Korea threat to the raft of scandals and controversies engulfing the White House. And yet, for Washington, Sharif’s ouster comes at an inconvenient time. The White House is in the throes of a long, drawn out, yet comprehensive policy review on Pakistan. The sudden shock of an ousted prime minister may throw a wrench in the administration’s policy calculations to this point. Still, the fact that the transition should be relatively smooth and efficient will ease Washington’s concerns about stability—which at the end of the day is the core U.S. interest in Pakistan.

Overall, Sharif’s departure should have relatively little impact on U.S.-Pakistan relations. Thanks to a rapidly growing U.S.-India relationship, and to Washington’s increasing impatience about Islamabad’s refusal to crack down more against terrorists on its soil, U.S.-Pakistan relations are poised for a period of drift—no matter who is running Pakistan’s government. Additionally, because Washington mainly views the relationship through a security lens, one of its key interlocutors in Pakistan is and will remain the Pakistani military. And that’s an institution that’s not going anywhere.

The takeaway? It’s undeniable that Pakistan has been plunged into political crisis. Still, we shouldn’t overstate the precariousness of the moment. The country will survive. A smooth transition is all but inevitable. Elections should take place within the next year. And for U.S.-Pakistan relations it will be business, even if a lack of overall business, as usual.

Still, given the realities of an activist judiciary—the Supreme Court disqualified another Pakistani prime minister, Yousuf Raza Gilani, as recently as 2012—it’s likely a matter of when, not if, a future Pakistani prime minister suffers the same fate as Sharif. A civilian leader sent packing prematurely? We’ve seen this movie before in Pakistan, and another sequel probably isn’t far off.