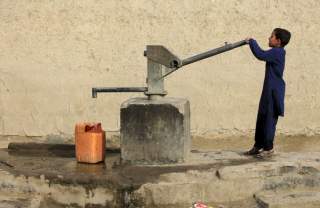 When it comes to Pakistan, President Trump’s Twitter feud with one of America’s most important partners in the fight against terrorism has dominated the news. But beneath the headlines, a massive water crisis is unfolding that has profound implications for the country’s stability and security. Rapid urbanization and conflict combined with corruption, crime and years of mismanagement have left a massive proportion of the population without access to clean water. And now, this long-festering crisis threatens to upend Pakistan’s politics.

Perhaps the strangest thing about Pakistan’s water crisis is that until recently, the country had been doing well in connecting more of its citizens to water supply and sanitation networks. From 1990 to 2015, the percentage of the country’s population with access to clean water increased from 86 percent to 91 percent. But in a reversal of what happens in most countries, almost all of this improvement occurred in rural areas—the percentage of urban residents with access to clean water actually declined from 97 to 94 percent over the same period.

Only a few other countries, most of them war-torn places like Syria and Gaza, have experienced similar reversals in providing clean water to cities. And while the causes of Pakistan’s water crisis are complex, the country’s political instability has played a key part. Pakistan is urbanizing at a rapid rate of over 3 percent annually—the highest rate in South Asia. The causes of this fast-moving urbanization are deeply troubling, with climate change and the fight against Muslim extremists acting as key drivers. Given this ever-quickening tide, Pakistan’s cities have had trouble providing basic services, including housing and water, to new urban residents.

But the problem is worse in the water sector because rampant corruption and mismanagement keeps prices high and coverage rates low. Because Pakistan’s cities can’t keep up with growing water demand from new residents, many urban-dwellers are forced to buy water from private tanker trucks. And because tankers often bring water from far away, prices are high, and tanker “mafias” raise them still further by illegally siphoning off water from municipal sources and reselling it at extortionate prices. These criminal gangs represent a serious challenge to Pakistan’s local authorities. As a Karachi official admitted, “These illegal hydrants are established by armed people, so it is very difficult for . . . staff to just dismantle them.” But authorities have also been accused of turning a blind eye to tanker mafias: no less an authority than the Chief Justice of Pakistan’s Supreme Court was quoted as saying, “there is someone behind the scenes at work who is minting money from [the tanker mafias].”

The result of this corruption and mismanagement is a serious and growing lack of clean water for many of Pakistan’s cities. According to figures presented to the Pakistani Supreme Court, 83 percent of water supplies in Sindh, Pakistan’s second-most-populous region, are contaminated with sewage and industrial waste, with the percentage rising to over 90 percent in Karachi, the country’s largest city and financial center. Even worse, up to 60 million people across the country may have been exposed to deadly arsenic leaking into Pakistan’s groundwater supplies. Late last year, the issue exploded into popular view when the Supreme Court ordered Sindh officials to present a plan for resolving the province’s water crisis. The Court’s Chief Justice minced no words, warning officials that “The water crisis issue in Pakistan is turning into a bomb.”

Unfortunately, Pakistan’s water bomb has multiple triggers, and if it explodes it may well send the country into an even greater political crisis. In addition to its water quality woes, Pakistan is at risk of growing water scarcity as a result of climate change, which some observers have warned could exacerbate existing insurgencies and make a military coup more likely. Nor are the consequences of a water crisis confined to Pakistan’s domestic security. During a December conference, a Chinese diplomat reportedly complained that the country’s chronic water shortages were hindering Chinese investment as part of the China—Pakistan Economic Corridor, the country’s highest-profile development project.

Pakistan’s local authorities appear to be taking the risk of water crisis seriously. Following the Supreme Court’s order, Sindh’s Chief Minister pledged to act quickly, promising residents that “It is our prime duty to take necessary measures so that people right from Kashmore to Karachi drink safe water.” But some national leaders have appeared hesitant to acknowledge the implications of water crisis for the country’s security. During a November 2017 international water conference, Sindh’s governor, who serves a representative of the central government, bafflingly stated that “Water is a very low priority” for the government. “Terrorism,” he went on to say, “is a way bigger issue than the water crisis.”

If Pakistan is to tackle its water woes, attitudes like this will have to change. For the United States, such reluctance is concerning, and adds other set of risk factors to an already difficult relationship with a volatile nuclear power. Unfortunately, Washington’s current spat with Islamabad leaves it with few good options to make the case that providing basic services, especially water, are essential to maintaining Pakistan’s security and stability. But it should try. The U.S. government’s recently-released Global Water Strategy prioritizes investment in water and sanitation as a tool to advance U.S. national interests, and can be used as a framework to help Pakistan address its water crisis. As President Trump himself acknowledged, “Water may be the most important issue we face for the next generation.”

Scott Moore is a political scientist and senior fellow at the University of Pennsylvania Kleinman Center for Energy Policy, where he studies climate change and water issues.

Image: A boy draws drinking water from a well using a hand pump in Peshawar, Pakistan March 4, 2016. Some 650 million people, or one in 10 of the world's population, have no access to safe water, putting them at risk of infectious diseases and premature death. Dirty water and poor sanitation can cause severe diarrhoeal diseases in children, killing 900 under-five a day across the world, according to United Nations estimates. World Water Day, marked this year on March 22, highlights various concerns about the world's water resources, and in 2016 is focusing on how good access to safe water can create paid work and contribute to a greener economy. REUTERS/Fayaz Aziz