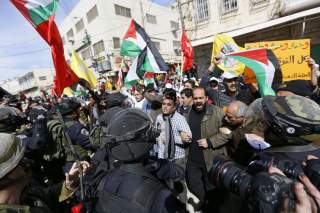 Thousands marched in the streets of Gaza last Thursday in support of Mohammad Dahlan, a longtime rival of Palestinian Authority (PA) President Mahmoud Abbas who has lived in the UAE ever since Abbas forced him into exile in 2011. Protesters blasted Abbas, whom they accused of corruption, tyranny and even treason, while at the same time cheering the exiled former leader.

Dahlan’s case is emblematic of Abbas’ tenure as president.

Unlike former Palestinian leader Yasser Arafat, who cultivated young leaders by shrewdly co-opting ambitious upstarts, the constantly-embattled Abbas has maintained his tenuous grip on power only by forcing out all potential challengers.

This is what happened to Salam Fayyad, the former prime minister of the PA, who resigned in 2013. Fayyad was the chief architect of an ambitious modernization program in the West Bank—one that relied on reform and transparency—which was extremely attractive to international donors. Fayyad’s promising modernization program was derailed, however, when Abbas began ramping up the campaign for the Palestinians to join the UN in 2011, which antagonized foreign donors (most notably, the United States, which donates some $370 million annually to the PA). By 2013, relations between Abbas’ Fatah and the politically independent Fayyad reached a new low, and Fayyad resigned.

Abbas has another long-standing feud with Yasser Abed Rabbo, the secretary general of the PLO’s highest decision-making body, the Executive Committee. Their feud first came to a head over disagreements about the Palestinians unilateral campaign for UN membership. When Abbas first toyed with the idea of going to the UN Security Council in 2011, reports emerged that Abed Rabbo was trying to undermine Abbas and turn public opinion against the UN bid. In retaliation for his perceived challenge, Abbas fired Abed Rabbo from his post as supervisor of all PA media operations in 2012. Rabbo did retain his position as the secretary general of the Executive Committee.

From there, Abed Rabbo has challenged Abbas from the right on almost every issue: he’s now furiously pushed the UN campaign, dismissed negotiations with Israel as pointless and even threatened to end security coordination with Israel. In response, Abbas appears to be laying the groundwork to oust Rabbo once and for all. Already, Abbas removed Rabbo from any role in the PLO’s financial allocations. There have also been reports that this was only the beginning and that Abbas ultimately intends to remove Rabbo from the Executive Committee either by firing him or by bringing up corruption charges against him.

The latter would fit the script Abbas used to oust Dahlan in 2011. Once considered an up-and-coming star within Fatah, Dahlan was promoted to head the PA’s security services in Gaza in the 1990s by Yasser Arafat.

It was at this point when tensions between Abbas and Dahlan first began. Abbas, then a senior PLO official, believed that Dahlan’s position was inappropriate given his youth (Dahlan is fifty-three today; Abbas, seventy-nine). As a young leader from Gaza, Dahlan represented an emerging cadre of leaders that were viewed with contempt by many senior PLO figures who had cut their teeth while the PLO was in exile in Jordan, Lebanon and Tunisia. Despite the hostility towards them from senior officials like Abbas, Arafat worked to co-opt this new generation of leaders.

When Abbas succeeded Arafat in 2005, he kept Dahlan on as an adviser, despite his suspicion that Dahlan was a threat. In the years that followed, Dahlan continued to advance within the Palestinian leadership, winning a seat in the PA’s legislative body in 2006. His swift fall from grace came the following year, however, after the short, internecine war between Fatah and Hamas for control of the Gaza Strip. Dahlan was reportedly abroad for medical treatment when Hamas launched its attack. Nevertheless, he was seen as the man responsible for losing control of the enclave in less than a week. Abbas subsequently attacked Dahlan in public, hanging the loss of Gaza around his neck. Dahlan fired back, slamming Abbas for failing to reform the PA.

By 2011, Abbas drew up corruption and embezzlement charges against Dahlan and stripped him of his parliamentary position. Earlier this year, a Palestinian court sentenced Dahlan to two years in prison on defamation charges. Long before that time, however, back in 2011, Dahlan fled Palestinian territories for the UAE. He’s remained there ever since, plotting his revenge.

It appears imminent. A report emerged in December that Fayyad and Abed Rabbo had met with Dahlan in the UAE. Though all sides denied the report—Abed Rabbo even threatened to sue the journalist who wrote it—it’s clear that many of Abbas’ challengers see Dahlan as a legitimate contender against the incumbent.

Dahlan also appears to have some support among ordinary Palestinians. Indeed, last week’s demonstration was not the first time pro-Dahlan supporters hit the streets. When thousands of Abbas supporters previously marched in Gaza in early 2013 for Fatah’s anniversary they were  disrupted by swarms of Dahlan supporters.

The most recent protest occurred at the onset of a PA trial against Dahlan for corruption. The trial, which has been postponed to the end of the month, has been a contentious issue in Palestinian leadership circles, with arguments breaking out regularly in leadership meetings over Abbas’ move to exile Dahlan.

Abbas responded to the pro-Dahlan march in much the same way  he has confronted these threats in the past: he ordered the PA to fire several Fatah employees who had attended the demonstration and accused the rival Hamas faction of paying protesters to take to the streets. Dahlan, for his part, cheered on the rallies from his Facebook page, calling for a “new era against Abbas.”

Hamas, ever Abbas’ antagonists, has mixed feelings about Dahlan. On the one hand, leaders such as Moussa Abu Marzouk insist that they are not aligned with Abbas’ chief rival. Still, other officials have stated that “Dahlan’s past is better than Abbas’ future,” referring with ambivalence to Dahlan’s role as architect of the PA crackdown on Hamas while he was in charge in Gaza.

Ultimately, it is Dahlan’s influence in Gaza that may be the most attractive to Hamas. The Islamist movement refuses to work with Abbas, despite having signed a reconciliation agreement with him. This has left Abbas in a weaker position, particularly as the international community searches for ways to rebuild Gaza. Dahlan is clearly positioning himself as someone waiting in the wings.

Grant Rumley is a research analyst at Foundation for Defense of Democracies. Find him on Twitter, @Grant_Rumley.