Panama Has Ditched Taiwan. Here's Why It Matters for America. 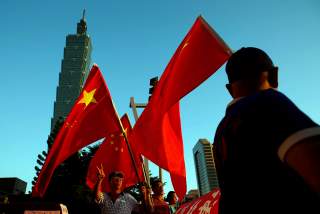 Last week’s sudden announcement by Panamanian president Juan Carlos Varela that Panama would henceforth be shifting its diplomatic relations from Taiwan to mainland China was not entirely unexpected in Taipei. Tsai Ing-wen had deliberately avoided visiting the country during her visit to the region after Panamanian leaders had delayed the acceptance of Taiwan’s new ambassador there for more than six months. For Taipei, it was clear that the writing was on the wall. Varela’s decision to favor Beijing came as another hit for Taiwan after it lost two other allies in the past year.

So what lies behind the recent moves of Taiwan’s allies to recognize Beijing instead? Part of the story relates to Taiwanese president Tsai. Coming from the independence-minded Democratic Progressive Party, President Tsai’s decision not to affirm the 1992 Consensus (on One China) and her congratulatory telephone call to president-elect Donald Trump in December of last year were poorly received in Beijing. Shortly after the telephone call, one of Taiwan’s African allies, Sao Tome and Principe, suddenly announced that it was dumping Taipei in favor of Beijing. According to Zhang Baohui, an academic at Lingnan University in Hong Kong, the shift by the small African country indicated that “Beijing has a new Taiwan strategy: they’re going back to their confrontational style, and the truce with Taiwan over the past eight years is over.”

Given the fact that the United States sits astride this precarious status quo, any increase in Cross-Strait tensions directly impacts U.S. national interests. While the official U.S. policy is to support the “One China” policy and maintain close diplomatic and economic ties with China, it is also committed by domestic law to protecting Taiwan from unification-by-force. Regardless of their preferences, U.S. presidents are obliged by the Taiwan Relations Act of 1979 to protect Taiwan and supply it with adequate military arms. Panama’s decision to abandon Taiwan—and the general trend it represents—raises two very difficult questions for policymakers in Washington. First, what does Panama’s decision mean for control of the strategically important Panama Canal? After all, the Navy depends on the canal to shift vessels from the Atlantic to the Pacific Ocean—particularly if there was a Taiwan-related contingency. Second, what does Taiwan’s gradual diplomatic isolation portend for the tiny country and for the U.S. policy to defend it from mainland China. Is the policy sustainable, given the massive changes in economic and military power across the Taiwan Strait?

In answering the first question, American policymakers should take Panama’s decision seriously and would be unwise to dismiss its strategic repercussions. The canal has long had a deeply strategic aspect for the U.S. Navy, which uses the canal transit from the Atlantic theater to the Pacific theater. In case of a Taiwan contingency involving a Chinese attempt to invade the island, U.S. forces in the Atlantic would certainly attempt to transit using the canal. In a well-known article, How the United States Lost the Naval War of 2015, written by James Kraska in 2010, China uses its commercial control of the ports on either end of the canal to close off use to U.S. vessels. While much of Kraska’s article is set in a fictional universe, he draws many strategic elements from reality. Presently, a Chinese company CK Hutchison Holdings (formerly Huchison Whampoa) does own and operate the two Panamanian ports through its subsidiary Hutchison Ports. In 1996, a U.S. State Department cable alleged that Panama’s 1996 auction for the operating rights over the canal had been facilitated by a Chinese state-owned enterprise, the China Resources Enterprise, which gave $400 million to Hutchison Whampoa Limited to clinch the deal. Despite a bid that was fourth, behind a Kawasaki bid, a Bechtel bid and a M.I.T. bid, the Chinese won the deal and now have a twenty-five-year lease, with an automatic renewal for another twenty-five years.

Policymakers in the Trump administration must also consider the sustainability of the U.S. commitment to protecting Taiwan. As things stand, any attempt to abandon its defense guarantee to Taipei would most likely severely damage American credibility among its Asian and European allies. However, on the other hand, it is clear that Taiwan’s increasing diplomatic isolation and inadequate defense posture strains the relationship. If a robust deterrence is the best way to avoid war, then it is clear that both Washington and Taipei have drifted very closely to disaster. Unfortunately, there is enough blame to go around for both. Spending around 2 percent of its budget on defense, Taiwan’s defense capabilities are in need of updating. For their part, successive American administrations have sought to placate Beijing by providing less and less arms at ever-higher prices. A RAND Corporation study published in 2015 noted that high rates of spending have “allowed the PLA to narrow the gap” and that due to new air, naval and missile systems deployed by the PLA, “the US ability to achieve its objectives in a Taiwan scenario [has] continued to erode.”

The only guarantee for a peaceful transition and unification is if Taiwan’s population decides that is what it wants and if a political solution can be agreed upon by both parties. However, Beijing is still intent on attempting to absorb Taiwan economically, to isolate it diplomatically and to outgun it militarily. Despite China’s impressive rise, the fact is that—as it stands—most Taiwanese do not want to be reunified with the mainland. Having watched the salami-slicing of Hong Kong’s Basic Law and liberties, they recognize that any unification with a Communist Party-led China, would likely lead to the suppression and submersion of both their political rights and their Taiwanese identity. Any attempt by China to unify Taiwan with the mainland by force, would lead to an international crisis. For Americans, Europeans and other liberal democracies, to sit by while an authoritarian regime invaded and suppressed a democratic society would be intolerable—morally as well as politically. Consequently, American—and arguably European, Australian and Japanese—policymakers should seek to bolster Taiwan’s defense capabilities and drive Beijing toward peaceful unification scenarios. The recent news that Taiwan will raise its defense-spending to 3 percent of GDP and develop its indigenous defense industry is to be welcomed. If peace is to be maintained in the Strait, then it will be because conventional deterrence is alive and well.

John Hemmings is director of the Asia Studies Centre at the Henry Jackson Society and an adjunct fellow at CSIS. He recently finished his PhD at the London School of Economics. Follow him on Twitter: @johnhemmings2.

Janjan Sun is a researcher at the Asia Studies Centre, Henry Jackson Society.