A Pandemic Plan for the Too-Little, Too-Late Trump Administration 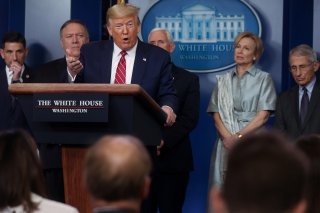 Any cataclysmic shock to our individual or collective system tends to be met with a predictable sequence of reactions, starting with denial and leading to eventual adaptation. When faced with a frightening event that has the potential of upending our lives, we first mentally push it away. “It won’t be that bad.” “It’s a Chinese thing.” “It’s not as serious as the flu.” The stages are usually described as denial, anger, bargaining, depression and acceptance. As a country, in regard to corona, some though not enough of us—yes this means you, millennials and you, Florida—have by now overcome the phase of denial. Many are in stage two, anger, and with some justification, given the slack or even counterproductive response of our public agencies all the way up to the national government. Next, we need to skip bargaining and depression, which will not serve us well at all, and move directly to acceptance, of the fact that we are confronting a critical threat, and concentrate on the best ways to address it.

Denial has already cost us our one big advantage—what could have been our head start. We had two months in which to prepare. This ought to have included the accelerated production of test kits, the design and rollout of public responses at all civic levels, bringing together the business community to plan for a robust supply and distribution chain of essential goods, anticipating a public run on basics, and preparing our medical system for an influx of patients—both those that are sick and those who fear they may be sick.

That we failed to do pretty much all of this makes me “angry,” yes, especially since we had a plan for this and indeed, this specific scenario was a “planning assumption” in our 2017 National Pandemic Plan. But as I’ve said, anger is not a productive response. What we need to do, and do swiftly, is to ramp up right now, on the basis of a realistic understanding of how our country and how our society works.

We need to start with what we know. Some aspects of a pandemic remain the same, regardless of which disease we are talking about. We know that it: spreads rapidly regardless of socioeconomic status; it needs to be slowed down so our medical systems can work out a response; it can only be slowed by social distancing.

In this instance, we also have the ability to learn from others. Italy is flailing. China, South Korea and Singapore have apparently succeeded. What is the difference, and how can we emulate the success stories?

Because I had a family member coming in from overseas who would self-quarantine, I went on a multi-store shopping blitz for them. Given the already pervasive empty shelves, I needed to try Whole Foods, Giant Foods and Safeway. All had cleaning wipes for the carts. The similarities ended there. Whole Foods was best stocked and there were cleaning wipes and hand sanitizer at the registers, but it was up to the customer to use them. Giant Foods had mostly empty shelves and huge lines, but the cashiers wiped the card reader/keypad after each customer. At Safeway, the shelves were almost as empty as at Giant, but there were no sanitizer products at the registers and the cashier unscrewed the top of her water bottle of water, took a swallow, then wiped her mouth with the back of her gloved hand—the same glove she had clearly been wearing a long time. That’s not terrible, but it’s also not nearly good enough.

More fundamentally, we need to safeguard our basic systems, including electricity, water supply, and the internet. If those break down, then we may pass the point of no return in terms of public behavior, and start seeing violence.

I have replayed the start of the March 15 White House briefing. Officials arrived and positioned themselves in a cluster around the podium as though for a photo op. The president and vice president entered the room and moved towards the microphone. The president surveys the journalists in the audience and notices that they are spaced with a vacant seat between each of them. “Good social separation,” he praised them. He might better have said, “Do as I say, not as I do.”

The current public discussion of the coronavirus threat is rife with partisan accusations and so far, the administration’s actions have been less than reassuring. But nations differ in their political culture, and this is also something we need to factor in. European societies tend as a result of their history to be top-down. For example, orders, laws and munificent gifts across the centuries, these things came from above and the populace fell into line. Angela Merkel, in her press conference, didn’t even have a team around her—she stood in the large conference room alone, in a dramatic expression of both social distancing and unilateral leadership. Our history is different. We started as colonies separated from our ruler by an ocean. Our settlers had to be self-reliant, organizing their own little one-room classrooms, hiring their own sheriff to keep order, forming their own wagon-trains for greater safety as they crossed vast expanses of ungoverned land. China succeeded by focusing on its greatest cultural strength: the ability to get enormous numbers of people to work obediently in concord. It was impressive and it seems to have worked. But that’s not our greatest cultural strength. Ours lies in the ability of small communities to band together and self-organize, and in our ingenuity born of finding ourselves on perilous frontiers and having to come up with solutions pronto.

It’s possible that we will not have an effective national response. In that case, agencies, states, cities and other such entities will attempt to pick up the slack. Even as we hope that our leaders will provide solid guidance, we will need to fall back upon our own ingenuity. And that’s not such a bad thing. With “4o acres and a mule,” and no national institutions, we won the West. Neighborhoods and communities, including the virtual ones, will need to pull together and exchange information and support. They will need to organize the mechanics of daily life. We have scientists, innovators, entrepreneurs and leading global thinkers. They will need to be our first and principal responders to find the solutions and the plans to carry us through. And each of us can do our part. For years we have been told, “If you see something, say something.” Our slogan now must be, “if you see something, do something.”

For example, on March 11, President Donald Trump announced a ban on travel from Europe effective midnight on Friday. Americans abroad for whatever reason, work, study or tourism, had to rush to get back to the United States before the deadline. (The White House’s clarification that U.S. citizens would still be admitted after the deadline was of little to no help because with the flight ban on all foreigners from Europe, it was obvious that the airlines would soon shut down those routes.) Report after report from New York, Chicago and Dulles describes a disastrous situation in which planeload after planeload of people over the course of the following days was dumped willy-nilly into immigration halls. There, they stood in endless snaking queues waiting for a small number of agents to check their passports and their temperature and ask them if they had been to China or Italy. The law of averages informs us that inevitably, a percentage of those people were already infected though symptomless—or, as would not be discovered until they got to the front of the line, already showing signs. They now had up to six hours in close quarters to spread the virus to others, before being sent to their respective onward destinations to spread it into the community at large.