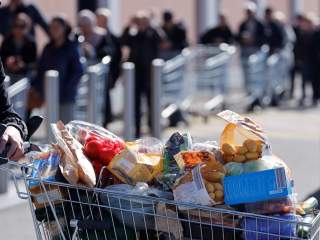 With all the uncertainty swirling around the Covid-19 outbreak, one thing is crystal clear: the methods needed to prevent or contain an epidemic have exposed the vulnerability and fragility of U.S. supply chains. Quarantines, travel bans, and factory shutdowns showed the risks in achieving economies of scale through geographic concentration.

Concerns over certain supply chains are not new. In Washington, DC policy circles, much attention has been paid to areas with a direct impact on defense and national security, such as semiconductors and rare earths. What the ongoing crisis lays bare, however, is the extent of the brittleness in areas that are not considered traditional national security matters but still have a tremendous impact on America’s ability to compete, defend itself and just plain function.

The most striking example is that of pharmaceuticals. China produces 40 percent of the world’s active pharmaceutical ingredients (API)—the key ingredients for many common medicines such as antibiotics and painkillers. Factory shutdowns in China meant a drop in API exports to India, the world’s largest manufacturer of generic drugs. India, in turn, restricted exports of API and medication to Europe and the United States. Last week, U.S. Food and Drug Administration (FDA) officials announced before Congress a shortage of a specific, unnamed drug due to the coronavirus outbreak.

China’s leaders understand these vulnerabilities well and now and then remind other countries of the leverage this gives them. Beijing did so last year when it threatened to curtail the exports of rare earth elements, minerals with unique properties that are essential for modern electronics. A few days ago, an article appeared on the website of Xinhua, the official state-run press agency, noting that if China halted exports of pharmaceuticals and medical equipment, the United States would be “plunged into the mighty sea of coronavirus.”

Even more concerning than being confronted with the fragility of the supply chain is the realization that U.S. companies often don’t fully understand their supply chains. In other words, firms can’t project how bad a situation will be because they don’t always know where key raw materials come from.

The coronavirus crisis also makes clear that you don’t need a shooting war or a nasty trade dispute—where the United States has a say to some degree in how the situation plays out—to have a major supply chain problem on your hands. Mother Nature, missteps by Chinese officials in the early days of the outbreak, and the overarching opacity of the Chinese Communist Party converged to create a scenario where U.S. government and business leaders can only wait and hope for the best.

The United States is critically vulnerable because of highly concentrated logistics networks. Key supply chains must be diversified and secured. Doing so will be complex, costly, and time-consuming. There are three actions to start this process.

First, officials from the departments of Commerce, Defense, and State, the White House and the intelligence community, in cooperation with Congress must identify the supply chains where such vulnerabilities pose an unacceptable risk to U.S. national security, economic security, and core necessities. Some of this work has already been done, such as with microelectronics and critical minerals. The United States must do the same for things like pharmaceuticals and medical equipment.

Second, once these essential supply chains are identified, government officials should work with relevant business leaders to audit these networks, map them, and identify knowledge gaps. Ideally, the private industry would cooperate on these issues proactively. Many firms already dedicate considerable resources to supply chain risk management and data analytics. Congress should be prepared, though, to pass legislation to mandate this work if such cooperation is not forthcoming.

Third, is crafting and executing a strategic plan to disentangle and diversify these essential supply chains. This should be led by a special interagency task force. While the United States can achieve a lot on its own, its allies and partners have a strong vested interest in doing the same. Multilateral cooperation on such broad technology policy issues would lessen the economic impact and help to ease the burden on the inevitable but necessary upheaval these actions will create.

The Covid-19 pandemic makes clear that large swaths of the U.S. economy are highly dependent on networks that are easily broken, either through natural disasters and epidemics or deliberately by an adversary. Addressing this reality will require a restructuring of key supply chains in partnership with U.S. allies. Doing so will be difficult and expensive; it is also vital.