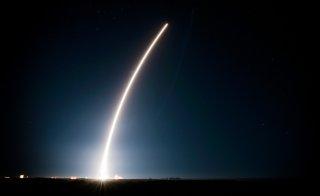 As the world begins its gradual recovery from the coronavirus pandemic, we are reminded what humanity can accomplish when motivated by a common purpose—and extreme circumstances. Through the tireless efforts of scientists, health professionals, policymakers, and countless more, we will turn the tide of the pandemic.

Thirty years ago, the world faced another existential threat: the collapse of the Soviet Union and the fate of its many thousands of nuclear weapons. Just one of these devices—if it ever fell into the wrong hands—could decimate an entire city.

As each of the former Soviet republics charted its own path to independence, questions emerged over the security of the USSR nuclear stockpile. Together, world leaders, non-proliferation experts, international bodies, and old adversaries joined hands to secure or dismantle the orphaned arsenal. To the surprise of many, the collapse of the Soviet Union was relatively bloodless, and to the relief of all, no nuclear weapons were detonated or fell into wrong hands.

The people of Kazakhstan deserve credit for their role in post-Soviet nuclear disarmament, as well as their current efforts in non-proliferation. Our first step towards this goal was the closure of the infamous Semipalatinsk nuclear test site in 1991. It was here that the Soviet Union had conducted 456 nuclear tests for more than four decades, which exposed up to 1.5 million people living around the site to nuclear fallout and caused huge damage to the environment.

Just four years later in 1995, Kazakhstan completed its voluntary renunciation of the world’s fourth most powerful nuclear missile arsenal, which it had inherited after the USSR’s breakup. This deadly legacy then surpassed the nuclear forces of France, Great Britain, and China combined. Indeed, we decided to rid the country of these weapons, believing that the world would be a safer place without them. In cooperation with Russia and the United States, we removed all the warheads and dismantled their infrastructure.

Yet the specter of nuclear destruction persists—Pandora’s box opened in 1945. The present expansion of nuclear weapons is alarming in both size and diversity. New technologies—from warhead miniaturization to hypersonic missiles—are changing the way states think about nuclear war. Once a tool for global deterrence between superpowers, nuclear weapons are now viewed as tactical or regional assets. This is a dangerous mindset that is unfortunately shared by part of the world’s military planners.

Thus, Kazakhstan sees the imperative of promoting confidence-building measures between nation-states—especially vis-à-vis nuclear weapons—as it did in using its non-permanent seat on the UN Security Council in 2017-2018. We appeal to reinvigorate political dialogue and negotiations on nuclear weapons.

On August 29, the thirtieth anniversary of the closure of the Semipalatinsk nuclear test site, the world marks the International Day Against Nuclear Tests, designated by the UN General Assembly in December 2009 at our initiative.

It is an occasion to remind the world that we need to consider concrete steps to advance global nuclear disarmament and non-proliferation efforts.

First, it is necessary to establish and expand nuclear-weapon-free zones in as many regions as possible. In 2009, Kazakhstan, together with its neighbors, created a nuclear-weapon-free zone in Central Asia, the first located entirely in the northern hemisphere. In this context, it is of the utmost importance for the international community to explore all the opportunities to preserve the nuclear deal with Iran, reached in 2015 with the modest contribution of Kazakhstan, which hosted two rounds of talks.

Second, the Treaty on the Prohibition of Nuclear Weapons, the first multilateral and legally binding agreement to ban their development, stockpiling and use, entered into force earlier this year. The treaty, supported by 122 states, strengthens collective hope for a world free of nuclear weapons by the UN’s Centennial in 2045.

Third, we must also end nuclear weapons testing once and for all. This can only happen through signature, full ratification, and compliance of the Comprehensive Nuclear-Test-Ban Treaty by the remaining eight states on whose action its entry into force depends. Without their unanimous support, the treaty is totally undermined.

Finally, the world should continue to advance the peaceful use of nuclear energy. As the global energy transition unfolds, demand for clean and affordable baseload power is increasing. A significant recent achievement on this path was the establishment of the International Atomic Energy Agency’s Low-Enriched Uranium Bank in Kazakhstan. Its main purpose is to provide countries with a secured stockpile of nuclear fuel in case of disruption of commercial supplies.

We in Kazakhstan are under no illusion that it is unrealistic to call upon nuclear powers to give up all their weapons immediately due to the Mutually Assured Destruction thinking. Nevertheless, as a starting point, all efforts should be made to substantially reduce the still massive global stockpile.

The recent decision by the United States and Russian Federation to extend the New START Treaty, which augurs well for future agreements, is welcome. The U.S.-Russia Presidential Joint Statement on Strategic Stability, following the presidential summit in Geneva, unequivocally reaffirmed that “a nuclear war cannot be won and must never be fought.”

Obviously, critics might say that the aspiration of a nuclear-weapons-free world is wishful thinking. The case of Kazakhstan proves otherwise.

Our country pursued its independence without relying on nuclear weapons for its security, though we are flanked by two nuclear powers. We advocate a responsible foreign policy and equitable and sustainable economic development. We strive for mutual trust within the world community. Today, this policy is continued by President Kassym-Jomart Tokayev, who previously contributed to the cause of a future world free of nuclear weapons as our foreign minister and as the secretary-general of the UN Conference for Disarmament.

During the Cold War, despite the prevailing mistrust, the United States and the Soviet Union resolved to vastly reduce their nuclear stockpiles. Thanks to the determination of their leaders, nuclear catastrophe was averted, and the threat of nuclear war receded. The statesmen of today should emulate their sterling example.

Today, we need determination and wisdom to place the common interests of humankind above short-term political considerations. Together, there is no challenge too large for us to overcome.