Pay Up: The Realist Case for Ending the UN Liquidity Crisis 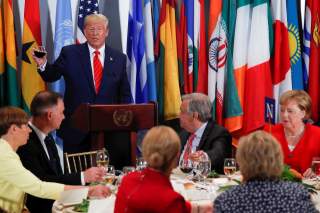 In a letter sent to UN staff last week, Secretary-General Antonio Guterres warned that the organization is facing a cash shortage and may deplete its liquidity reserves by the end of the month. He urged his staff to take additional measures, such as limiting official travel and saving energy, to further curtail expenses.

Presently, only two-thirds of UN Member States have paid their annual dues in full. This translates to a deficit of roughly 30 percent or $1.3 billion. Among the delinquents, who have defaulted on their payments, are Brazil, Iran, Israel, Saudi Arabia, South Korea and the United States.

What is now being called the worst cash crisis in nearly a decade is not only jeopardizing payments to vendors and staff salaries, but also undermining the implementation of mandates and reform efforts. Conferences are being postponed and reimbursements to troop- and police-contributing countries will be further delayed. In a statement to the Administrative and Budgetary Committee, Guterres explained that, had the organization not enacted emergency spending cuts earlier in the year, it could not have paid for the opening of the General Assembly last month.

Whereas the situation is dire, it is far from new. Only a small fraction of Member States regularly pay their assessed contributions on time, namely thirty days into the calendar year. This is attributable, in part, to misalignments between the UN and national budget cycles, but also to cavalier attitudes held by Member States. Yet, things have taken a turn for the worse. At this time last year, 146 countries had paid their dues, in comparison to just 134 this year.

The UN budget process is complex, to say the least. The organization relies on three sources of funding: assessed contributions to the regular budget, assessed contributions to the peacekeeping budget and voluntary contributions. The regular budget, which is the subject of the current headlines, covers the administrative costs of the UN Secretariat, the International Court of Justice and a number of UN agencies and programs. It also funds special political missions. In 2019, the regular budget amounted to roughly $2.8 billion. Contributions are calculated based on gross national income, though adjustments are made for less developed countries and for countries grappling with a large external debt.

The biggest culprit in this entire debacle is, by scale, the United States. Responsible for 22 percent of the budget, the US government currently owes $674 million on top of $1.2 billion accumulated in arrears. Again, this is not news. The United States has defaulted on its payments before, under both Republican and Democratic presidents. However, with the debt owed totaling almost $4.5 billion (including contributions to the peacekeeping budget), the situation has taken on dramatic proportions.

The current administration’s reluctance to pay its dues is an expression of its skepticism towards multilateral institutions and its broader withdrawal from the international stage. Yet, the United States is not doing itself any favors by failing to make its assessed contributions. The budget process is a battle for influence and, right now, the United States is losing.

Of course, there are moral arguments to be made for maintaining a continuous funding stream to an organization that provides vital services to millions of people in mind. After all, the United Nations delivers food aid to twelve million Yemenis each month and protects civilians in war-torn places like South Sudan and eastern Congo.

Moral qualms aside, there are tangible political gains being foregone. By defaulting on its payments, the United States is creating a vacuum for China to fill, thereby allowing China to tighten its grip on the organization. Over the last couple of years, China has made every effort to step up its presence in the UN system. It sends representatives to almost every meeting and is funneling more nationals into the UN civil service than ever before. It has significantly increased its financial contributions to the peacekeeping budget—from 6.6 percent in 2015 to 15.2 percent in 2019—as well as to the regular budget. Moreover, since bolstering its capabilities to conduct military operations other than war (MOOTW), China has deployed peacekeepers to the UN missions in South Sudan, Mali, Lebanon, Darfur and DR Congo. It now supplies more troops than any other permanent member of the Security Council. This has enabled China not only to showcase its military prowess but also to smoothen its pivot to Africa and build up international clout.

At the end of the day, decisions are made by those who show up and pay up. That does not stop holding true in the halls of the UN Secretariat. Those who show face and make the largest financial contributions are the ones who have the most say in the design and execution of UN mandates.

Withholding payments will also not compel the United Nations to adopt more sustainable budgeting practices, remove bureaucratic barriers, and become all-around more efficient. Owing to the current crisis, the organization will wind down a subset of its activities, just to restart them in January, when Member States start paying their dues for the next fiscal year. This creates bottlenecks and logjams. It is much like driving a car. Drivers waste more gasoline in stop-and-go traffic than they do cruising down the highway.

The answer is simple. It is in the best interest of the United States to pay up and rally the other delinquents to follow suit. Of the many products the United States exports, its model of government shutdowns should not be one.

Alexandra Marksteiner is a Master of Arts candidate in Strategic Studies at Johns Hopkins SAIS​.