Peace in Afghanistan? Don't Count On It. 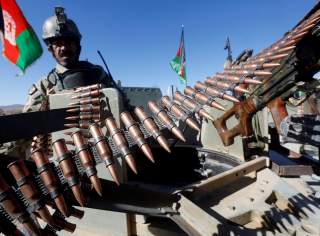 For all the newsprint devoted to Syria lately, one would think that this was an American “core interest.” Yet, that conclusion could not be further from the truth. The United States has had a minimal military presence there with no clear mission. The American deaths that occurred on January 16 are tragic, of course, but should not be used cynically by those hoping to prolong the presence of U.S. troops in the country—one that is unconstitutional and simultaneously violates international law. As for the Islamic State (aka “bad dudes in pickup trucks”), let’s not kid ourselves: the same bad dudes (or their cousins) will still be lurking in Syria for a long time. The presence of a paltry number of Americans around was never going to change that, and may even have encouraged the group’s nefarious undertakings.

Afghanistan is not so easily dismissed, however. The Taliban had harbored (the Saudi) Osama bin Laden, after all. Immense American resources have been poured into that country for almost two decades. We are told that Afghanistan is still home to the “greatest concentration of terrorists anywhere in the world.” A national-security expert claimed recently that “a presence in Afghanistan . . . completes the web” of U.S. surveillance over the whole of the greater Middle East. Geopolitically, Afghanistan is located conveniently close to “the soft underbelly” of Russia and China, and its neighbor Iran. American casualties have been reduced substantially. So, what’s not to like?

This is not the place to offer a critique of the feeble bromides above, nor to dissect the president’s latest comments on Afghanistan, including the most recent remark regarding the Soviet War in Afghanistan that drove the press into yet another “feeding frenzy” on the Russian influence conspiracy theory.  As a young student in the 1990s, I spent considerable time on the ground conducting research in Russia and Central Asia on that tragic war and the president was not too far off the mark, actually. My concern is that the vast majority of Americans do not actually realize what is going on in Afghanistan today on a daily basis. For example, the Washington Post published a long and detailed story on January 12 about the air quality in Kabul instead of the war raging in and around Kabul. Of course, it’s easier to report on air quality or on an anti-corruption campaign in Kabul than to actually leave the capital to find out what is going on in the rest of the country. A good way to discern the facts is to examine two press articles side-by-side about the war in Afghanistan from early January 2019.

The first article by Andrei Serenko was published on January 11 in the Russian newspaper Nezavisimaya Gazeta under the title “The Taliban opens a ‘New Year’s Front’ in Northern Afghanistan [Талибы открыли ‘новогодний фронт’ на севере Афганистана].” This article summarizes fighting that has taken place so far in 2019 in the provinces of Faryab, Balkh, Baghlan and Badghis. As the article illustrates, this fighting is significant in at least two respects. First, the Taliban has traditionally been much stronger in the southern part of the country, so it is noteworthy that the movement has become extremely active in these northern provinces; and second, conventional wisdom over the last decade is that the fighting quiets down over the winter, but that assumption does not comport with these latest reports.

Most of the article describes intense fighting in the province of Faryab, but for illustrative purposes, let us focus here on the province of Badghis. The article reports on a combat action initiated by the Taliban on January 4 that seized two block posts, killed or wounded eighteen government troops, killed a local commander [Mullah Hadji Daran], and wherein the Taliban seized for trophies: a heavy mortar, a sniper rifle, as well as several submachine guns and American-made semi-automatic weapons. That action on January 4 apparently caused government units “to basically flee leaving equipment and a large amount of ammunition [фактически, бежали, бросив снаряжение и большое количество боеприпасов]” from the town of Sar Chalang on January 5–6. On January 7, the Taliban attacked and seized four block posts near the town of Garchag, inflicting twenty-five casualties on government forces, while suffering six themselves. An RPG destroyed a police armored car, according to this account. “A grenade launcher, 5 Kalashnikov rifles, a walkie-talkie and ammunition fell into the hands of the rebels [В руки повстанцев попали гранатомет, 5 автоматов Калашникова, рация и боеприпасы].” On the same day, the Taliban is reported to have made attacks near the towns of Tashbalak and Bandsacharn. For a loss of five Taliban insurgents, the rebels were reported to have killed thirteen Afghan Army soldiers and captured three motorcycles, a machine gun, more American-made semi-automatics and additional ammunition. Finally, the article says that the Taliban also laid an ambush on that day near the town of Sacharnalg, in which it is said that eight government commandos were either killed or wounded. Again, most of the fighting described in this Russian analysis discusses actions in other provinces around Afghanistan, but this small sampling is typical of the whole, except that they also repeatedly report on capturing government vehicles, for example a “Ranger [Рейнджер]”-type armored vehicle.

For the sake of comparison, let us now briefly examine a New York Times article by Najim Rahim and Mujib Mashal that was published on January 10 under the headline “Violence is Growing in Northern Afghanistan, but Neither Side is Gaining Much Ground.” The article notes that a Taliban offensive during the winter is unusual, but does not draw any greater analytical conclusions from this break with the customary pattern. Nor does the article note that the north had generally been more quiet and stable than the south. The very first sentence of the article observes that there has been heavy casualties on both sides, but then it says “that heavy fighting has failed to shift the battle lines,” apparently confusing this conflict with a conventional war in which two opposing armies face off along a single battle front. The article turns even more surreal when these journalists quote at length an Afghan Parliamentarian, Nisar Ahmad Ghoryani, head of the parliament’s security and defense commission. He claims that the Taliban might take security outposts at night, but “they can’t fight face to face during the day.” As a military analyst, one is not sure what to do with that assessment, except perhaps urge the Taliban to get more sleep. The Taliban, Ghoryani continues, have suffered heavy casualties, but are still able to fight, “because they get enough military and financial support.” He blames both Pakistan and interestingly also Russia for supporting the Taliban. The article closes with two propositions that American readers might find reassuring: first, there are new interior and defense ministers in the national government in Kabul, and second, the Islamic State and the Taliban are said to be squaring off against one another in the east of Afghanistan.

Even if one is tempted to dismiss some claims in the Russian report as Taliban “spin,” the common exaggeration that sometimes accompanies battlefield reports or even good old Russian schadenfreude, it is hard to avoid the conclusion that the New York Times article either amounts to “happy talk” or just incompetent journalism. One could go a step further and even wonder if Afghan journalists writing for the New York Times are capable of objectively covering this sad debacle at this late date. They may reasonably feel disconcerted by the prospect of the Taliban defeating government forces, since their jobs and even their lives could be in jeopardy in that scenario. At this point, one may begin to suspect that the American public might not be receiving a complete picture of what is actually going on in Afghanistan.

As a counterpoint to the “happy talk” above from the New York Times, let me briefly suggest five myths that U.S. policymakers must weigh going forward in Afghanistan. I will not even bother with one of the most common myths—the notion that the war can be won by pressuring Pakistan. That particular idea is so old and worn and apparently unhelpful, we need not consider it seriously here.

Myth #1: The U.S. military presence in Afghanistan is quite minimal.

While the troop numbers have come down considerably, the level of U.S. contractors remains high and this represents a way to disguise the true cost of the war to the American public. Moreover, the immense logistical difficulties of maintaining supply in this exceedingly remote, land-locked country imply that even a small presence of forces in the country still amounts to an expensive and unsustainable burden on the U.S. military. At present, the conflict is costing Americans about $45 billion per year.

Myth #2: Air power and high-tech solutions will save the day.

The American “way of war” is to search for high-tech solutions and to confront the enemy from ten thousand feet and above. However, by this time, one would hope that U.S. strategists have finally concluded that good old-fashioned political, ideational and geographical factors are determinate in counterinsurgency wars, rather than technology. The “mother of all bombs” has proven hardly decisive, but all the PGMs in the world will not defeat the Taliban. And the attempt to build an Afghan Air Force seems like a bad joke concocted by the relevant contractors.