Peace Is Passé: Why the Pacifist Movement Died 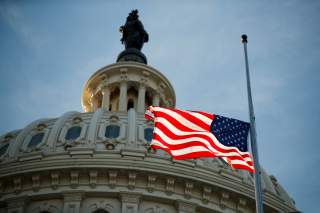 In the context of the current primary cycle, the Democratic candidates’ reactions to the U.S. withdrawal from Syria have revealed their different views on foreign policy.

In a larger historical context, the candidates, collectively, shifted the Overton window on foreign policy. Among the more notable if underappreciated consequences are the further relegation of the American pacifist movement to the fringes of the country’s discourse.

Marc Lacey and Anderson Cooper, who moderated the fourth Democratic debate, posed leading questions to candidates about "power vacuums” and U.S. “betrayals.” These questions were entirely predictable in a national discourse in which a bipartisan, interventionist elite smells blood amid President Donald Trump’s bungled Syria withdrawal.

To an earlier generation of Americans, however, the moderators’ prompts would have come as a surprise. For the question of whether the United States was morally justified in using military force in the first place was open for discussion.

Extreme as pacifism may seem, the absence of a pacifist movement today stands in contrast to the status quo throughout much of the twentieth century. The pacifist movement never came close to representing plurality opinion. Driven, however, by many of the country’s most influential leaders and activists, pacifism did exert enough influence to shape national policy.

Pacifists were well-represented in the broad-based antiwar movement that tried to keep the United States out of World War I. The movement eventually failed, but as public opinion in the 1920s came to regret the intervention, thousands joined pacifist groups like the Women’s International League for Peace and Freedom. Its leader, Jane Addams, was rewarded in 1931 with the Nobel Peace Prize for holding “fast to the ideal of peace even during the difficult hours when other considerations and interests obscured it from her compatriots and drove them into the conflict.”

Even the decisive allied victory in World War II wasn’t enough to eliminate the pacifist movement as a national force. During the 1940s, the conscientious objectors of the war organized as “radical pacifists” and popularized Gandhian strategies of nonviolent resistance in the American pacifist scene. The American Friends Service Committee, founded during World War I on behalf of conscientious objectors seeking alternative service, used its relief work to gain enough prominence to win a Nobel Peace Prize in 1947.

By the mid-1950s, a new peace movement—driven by issues such as nuclear testing and the Korean War—began to coalesce. While the peace movement of the era was comprised predominantly of liberal internationalists who questioned the United States’ Cold War posture, its most cohesive wing consisted of pacifists who rejected war as a matter of principle.

The pacifist movement peaked during the Vietnam War. Pacifist sentiments among the country’s intellectual elite gave the movement outsized influence. A 1969–1970 Carnegie Commission National Survey found that American academics were nearly unanimous in their opposition to the Vietnam War. Both religious and radical pacifists were represented in the ideological spectrum of academic antiwar opinion.

The wars in Afghanistan and Iraq have weakened public confidence not only through conflicts but also with a strategy of military primacy more generally. These sentiments were reflected in a dig Sen. Bernie Sanders (D-VT) made at the expense of former Vice President Joe Biden regarding his support for the Iraq War, as well as South Bend Mayor Pete Buttigieg’s ambivalent view on the U.S. mission in Afghanistan even while calling for “American leadership” in the world.

Yet on the larger philosophical question of using military force, not one candidate at the debate came close to endorsing pacifism. Rep. Tulsi Gabbard, perhaps the most outspoken candidate, managed to tout her credentials as an enlisted member of the military while reserving her ire for “regime change wars” despite the fact that the current U.S. engagement in Syria is aimed at ousting neither the Assad nor any other regime. Beto O’Rourke, a former congressional representative for Texas, touted the importance of addressing foreign-policy challenges without violence—an insight he seems to believe is consistent with deferring to the judgment of Trump’s former secretary of defense, James Mattis, who he also lauded effusively.

In the sense that they are eschewing the pacifist stigma, the candidates in this cycle are echoing the views of their predecessors in recent elections, from Barack Obama to libertarian Ron Paul. Even candidates with the most visible restraint-oriented views have consistently and explicitly denounced pacifism, instead lambasting the country’s leadership specifically for its “dumb” wars.

The candidates’ views, whatever their merits, are responsive to public opinion. There is little indication that Americans even at the outer edges of mainstream opinion reject the morality of force in absolute terms. Pollsters typically don’t even bother to test for pacifist views, but it is telling that less than 1 percent of Americans express no confidence in the military as an institution.

Why, despite pacifism’s historical resonance in the American tradition, has the movement failed to make a comeback amid the country’s overextension both at home and abroad?

The answer can be gleaned from analyzing transformations in American society since the Vietnam War. Beginning in the 1970s, policymakers fundamentally altered the relationship between the military and the American people. The transition to an all-volunteer force put the burden of wars on a narrow slice of Americans, disproportionately outside the country’s elite corridors. The military service of a candidate like Buttigieg may have been lauded, but it would not have been a novelty as it is today.

At the same time, growing defense budgets, now on track to hit $1 trillion, became a key component of the American social safety net as a wide cross-section of Americans found employment in the defense industry. The widely-accepted theory that a military buildup facilitated U.S. victory in the Cold War has contributed to a national mythology around military service that inures the public to the costs of this formula. This is why, when Biden raised the prospect of eliminating the Pentagon to pay for Medicare for All, it was understood to be an absurd thought experiment.

Pacifists throughout the twentieth century made headway by convincing both institutions and individuals that cooperation with the military was tantamount to an endorsement of unjust U.S. military interventions. This line of argument was influential in convincing elite universities to rebuff military and CIA recruitment on campus for programs such as the Naval Reserve Officers Training Corps.

That argument is dubious today for the simple reason that those working in the defense industry are largely removed from the conflicts of the U.S. military. The most expensive weapons program of the past two decades, the F-35 fighter, did not conduct airstrikes in Afghanistan until 2018. Only in 2019, after receiving another injection of $95 billion over the last year, did the F-35 fly a mission in Iraq for the first time (leaving the Senate Armed Services Committee to wonder why a $35,000-an-hour, fifth-generation fighter was used to strike “a bunch of terrorists hiding in the bushes.”) Yet tens of thousands of personnel are working on the F-35 program across the country. Whatever their complicity in the system’s delays and cost overruns, they can ultimately keep their jobs with few moral misgivings about their contributions to the government’s ill-fated military interventions.

Social unrest within the United States, meanwhile, has not boiled over enough to provide an opening for the antiwar movement. An advantage that Cold War-era pacifists enjoyed was that they could join forces with popular domestic causes such as the civil rights movement that linked militarism to other societal injustices. Ties between African-American civil rights leaders and the pacifist movement dated back to World War I-era organizations such as the United States Fellowship on Reconciliation. Many of the earliest and most visible civil rights leaders were active in the pacifist movement, such as Bayard Rustin, the executive secretary of the War Resisters League, who organized the August 1963 March on Washington for Jobs and Freedom, James Farmer, the co-founder of the Congress on Racial Equality, and Student Nonviolent Coordinating Committee leaders Bob Moses and John Lewis. Many early white supporters, including a number of Freedom Riders, came to the cause from pacifist circles. Through the civil rights movement, the pacifist cause received a national platform that would have been difficult to gain on its own.

Today’s African-American candidates, such as Kamala Harris and Corey Booker, invoke the civil rights movement but ultimately have a different base of support. Booker’s praise of the country’s “great generals” during the debate will, in all likelihood, cost him little with his constituents who see him, nevertheless, as a credible voice on social justice.

Pacifism appears unlikely to see a revival in the near-term. Beyond the current political climate, many of the institutions that have historically fueled pacifist movements are in a state of seemingly irreversible decline. Additionally, the influence of mainline Protestant and traditional peace churches has been declining. That decline has been exacerbated by the rise of evangelical Christianity in the Republican Party.

Still, countercurrents that are gradually moving into the mainstream may promote pacifist influences over time. The widespread, successful adoption of nonviolent resistance to confront the world’s most violent adversaries is prompting renewed consideration of the practical viability of principled nonviolence. Bipartisan buy-in on criminal justice reform is reopening larger questions on the morality and efficacy of punitive sanctions. The popularity of attachment-oriented parenting styles, particularly among educated, eco-conscious urbanites, is inspiring broader thinking on how to mitigate global violence through areas such as child development rather than war. And the proliferation of peace studies programs across U.S. universities is opening the door to pacifist perspectives and providing a counterpoint to the orthodoxies of security and area studies.