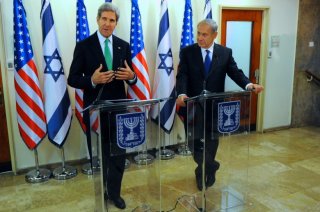 That the final Iran nuclear deal was met with opposition in Israel and Saudi Arabia is no surprise. As we argued over a year ago, neither neighbor was likely to welcome a deal with Iran, even if the official Saudi response has been more muted. Israeli prime minister Benjamin Netanyahu again declared the deal a “historic mistake,” while the Saudis have left more strident rejection of the deal to former officials like Prince Bandar, who said it’s worse than the agreement with North Korea.

Learning more details about the final agreement is not likely to change views, because for these regional states, the threat of Iran has always been about much more than the nuclear issue. For all the talk about whether or not this is a good deal, negotiating with Iran was the original sin from the perspective of Iran’s neighbors, legitimizing the Islamic Republic and its nefarious activities in the region.

For Israel, the primary worry is Iran’s links to terrorist groups targeting Israel with Iran-supplied missiles. Many in Israel’s security establishment worry far less about Iran as an existential threat (they know Israel has the capabilities to defend itself) than about the way Iran might use a nuclear cover for aggressive behavior at the conventional level. For Saudi Arabia, fears of growing Shi’a influence since the 2003 Iraq war have only intensified in the wake of the Arab Spring uprisings, leading to accusations of Iranian meddling from the Levant to the Gulf. This sectarian dimension has exacerbated what has already been a growing strategic rivalry between Tehran and Riyadh, played out through dangerous proxy conflicts throughout the region.

Real or imagined, there is also a tendency by these partners to read into the nuclear agreement a broader strategy of U.S. rapprochement with Iran, at a time when they already view U.S. influence in the region as being in decline. There are good reasons to be dubious about the Vienna deal leading to a fundamental strategic shift in Washington’s approach to Tehran; the issues that divide Iran and the United States run far deeper than what brings them together for the moment. But perceptions matter in this region, and the perception that Iran is the winner of this deal will make it a tough sell to other regional actors.

The good news is that we do not anticipate drastic actions by these partners to scuttle the implementation of a deal, notwithstanding the heated rhetoric. To be sure, Netanyahu has already vowed to fight the Vienna deal as it is considered by Congress, despite growing concern in Israel that his tactics are not producing results, while continuing to damage U.S.-Israeli relations. But if the deal ultimately moves forward, it would be highly unlikely that Israel would launch a military strike on Iran against the wishes of its closest ally and in the wake of an agreement widely endorsed by the international community. Israel would more likely adapt to the reality of the deal, seek to maintain non-nuclear sanctions on Iran and be at the forefront of efforts to expose potential Iranian cheating.

Despite statements by former Saudi officials that the Kingdom has the right to match Iran’s capability and the foreign minister refusing to rule out the possibility, a “cascade scenario” remains unlikely. President Obama has already gone on record about the fallout should the Saudis pursue that option. And while skepticism over Saudi capabilities to develop their own program is typically followed by the caveat that they may acquire nuclear know-how via Pakistan, that possibility is also remote. The more likely Saudi response is escalating its confrontation with Iran on non-nuclear fronts, especially in Syria and Yemen. These are viewed as arenas to bolster Saudi Arabia’s claim to the mantle of regional leadership and to roil the waters so as to hedge against the emergence of a Washington-Tehran rapprochement—whether or not that was ever in the cards.

All of this regional displeasure with the deal and with Iran’s broader role in the region will require tough and active management by the United States. The temptation in times like these is for the United States to hug its partners ever tighter in attempts to reassure them and address their concerns. Much of that is already underway with offers of new arms packages, security assurances and enhanced defense cooperation with Israel and the Gulf Cooperation Council states.

But the U.S. approach needs to move beyond these predictable measures. The nuclear deal with Iran is in the national-security interest of the United States, but it is also in the interests of its partners in the region. Indeed, it may save Israel from its consideration of a potentially disastrous alternative—a preventive strike on Iranian nuclear facilities. As for the Saudis, it keeps the Iranians from attaining what would be their one trump card vis-à-vis Riyadh.

As the Obama administration engages with Tel Aviv and Riyadh, reassurance needs to be balanced with frank discussion about the mutual responsibilities inherent in these relationships. The United States has had its share of foreign-policy missteps that have undermined its reputation as a credible security guarantor. But there has been no stronger supporter of Israeli security, and the United States has backed the Saudis in their Yemen campaign, despite significant concerns about the strategic endgame there. The United States has earned the courtesy of a less publicly hostile reaction from the Netanyahu government, just as it has earned some minimum level of trust from Saudi Arabia, despite recent differences over Syria policy and management of the Arab Spring. Partnerships, after all, run in both directions.