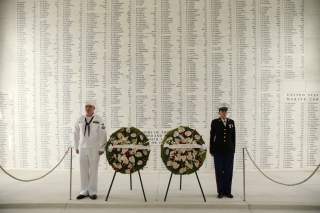 Every year, on December 7, Americans commemorate the most dangerous gospel in national scripture. The Pearl Harbor narrative is dangerous on two levels: first, it is a “good news” story (the Old English meaning of gospel), which means that we have elegantly, even subtly, shifted the darkest strategic consequences onto Japan; and second, that this anniversary’s narrative keeps undermining America’s ability to think strategically.

The sacred story makes Japan the bigger fool for unleashing the attack, than us, in so blissfully receiving it. Hence, the United States is forever the victim of a “sneak attack.” Japan foolishly “awakened a sleeping giant”—and for this, its cities were justly burned to the ground. “What were they thinking? How could they even go there?” Sure, the United States was caught with its pants down, but this was due to a string of errors by the military command on Oahu.

Contrary to this testament, our memory makes us the dummy. Pearl Harbor was not a sneak attack, but rather a brilliant operation, pulled off to near perfection. Nor can recollection possibly bring this enormous event down to the level of a mere “attack” or “air raid”—it was, instead, possibly the greatest naval defeat every suffered by a great power. This single sword stroke made Japan masters of the Pacific and Indian Ocean for six months, and it was an entire year before America could move with real force against Japan. Hardly any wars are won in a single battle. Yet Pearl Harbor gave Japan a supreme strategic advantage.

That Japan’s follow up failed to end the war is not merely surprising: many Japanese commanders too dreaded what was to come. Yet practically all American commentators on this day freely patronize Japan for its absence of “critical thinking.” In the Pearl Harbor gospel, Japan is the slow learner and the biggest loser. The battle of Pearl Harbor is all but spelled out as akin to Japan’s child-tantrum. Americans shake their heads in feigned wonder, ending with a remonstrance: If Japanese had real “critical thinking,” they would have had a real war plan (like us Americans), and would surely have done better.

Yet even more patronizing, James Holmes, a former colleague at the Naval War College, declares today that the “slow learner” Japanese failed to fully soak up Mahan. Had any red-blooded American been given the job, they would have done the Pearl Harbor battle just right.

And what, won the war?

No. Hitting PacFleet infrastructure—as Holmes’ insists—might have drawn out the tragic bloodletting by let’s say, generously, six months. Bravo. But defeat would have tasted just as bitter on the teak deck of USS Missouri. Holmes’ commentary, three-quarters-of-a-century after, is however not so much wrong as it revealing for what it tells us about the corrosive power of our Pearl Harbor gospel.

As he tells it: the Kido Butai did it wrong. Had we done it, we would have done it as it should have been. Right.

Holmes counsels a narrow-minded, tactical solution that would have simply wrought more mayhem, for a little bit longer, in that terrible war. He is thinking like the Imperial Navy admiralty, plus one or two. What does that say about the current state of American military “critical thinking?” Today, the U.S. Navy burns incense at Mahan’s altar just as worshipful Imperial Navy acolytes long ago.

The Pearl Harbor gospel satisfies contemporary American anxieties as though it were historical comfort food. Thus, we as Americans seize this day of special remembrance as an opportunity to take comfort in our national superiority. Serving up such a feel-good story, however, requires that the celebrated event be completely severed from its bigger backstory.

The U.S. connection to Japan and East Asia goes all the way back to the 1780s, and in the 1850s, using steam frigates and shell guns like a strategic pry bar, the United States Navy forced open a shuttered and xenophobic Japan. Thus, a deep-rooted Japanese suspicion of American intentions began. Moreover, the ceremonial events surrounding Perry’s expeditions carried more than a whiff of Shogunate submission. Nobody likes to submit to superior force, but a public bending of the knee is acutely bitter.

Thus, Japan entered a world of European domination anxious, insecure and even a bit paranoid—and with a chip on its shoulder. In European and American eyes, however, a “modernizing” Meiji Japan seemed eager to imitate the West in all things, and always in the politest of ways. Japan became a loyal sidekick of Britain, the world power, and Britain reciprocated with the treats and bonuses that patron-powers reserve for their clients.

Japan fed well on the spoils of the Great War, yet the conflict also served to ratchet up its paranoia. Leaders were shaken by the coming-apart of the world system after 1914. They watched how the Central Powers struggled to achieve autarchy, and they saw how Russia failed and fell. The lesson that Japan took from the Great War was simple and uncompromising: more great wars will come, and if it were to survive, Japan must build a bastion of autonomy. Above all, Japan must be free of all dependency on foreign powers, the United States above all—a nation so easily disposed to seek submission from others.

Moreover, it was America that then dominated East Asia. We were on the road to being the de facto guardian of China. We laid down a Pacific security concordat (the Washington Treaty system of 1922) where, by American fiat, we ended the Anglo-Japanese alliance and forced Britain and Japan to accept our terms for fleet size and arms control. Japanese paranoia shot up. And as if to feed it, all serious U.S. war planning targeted Japan and only Japan—the first waking thought of every imperial officer.

Japan pushed for autonomy and security just as hard as it could. Yet the lessons its leaders took onboard during and after the Meiji Restoration were wholly wrong-headed and unwise: 1) Japan’s best hope for security lay in its army and navy, 2) Japan could build viable autonomy if it established a strategic sphere in Manchuria and the Pacific, 3) if pushed to give in to Britain and the United States, it was better to fight than submit.

Yet by September 1939, this path had failed. Japan was defeated by the Soviet Union in Manchuria and strung out into wasting stalemate in China. Then the United States embargoed all steel and oil—effectively bringing Tokyo to its knees in just months. Japan faced the existential choice that it had brought on itself after two decades—submit or fight. Japan’s war strategy was simple: they would demand, and in the end get, America’s respect (which they felt strongly they did not have!). They hoped, of course, that this would manifest itself in a not unfavorable treaty. [It is ironic, however, looking back, that they actually seemed to have succeeded in that!]

Yes, Japan chose a self-destructive strategic path—but America encouraged and prodded Japan’s increasing paranoia—and yet the evidence of where they were going was in plain, naked sight, year after year.

My conclusion is that the core U.S. constituencies—the U.S. Navy, the State Department and pro-China interests—enjoyed antagonism with Japan, and for practical as well as emotional reasons. What is clear to me is that the United States chose not to see the world through Japanese eyes after 1918, and it failed even to take urgent interest in what was really going on inside the Japanese leadership mind.

It would be easy to just say that Pearl Harbor was the inevitable outcome of American obduracy—but that is not enough. I believe that the war itself was the outcome. This is not to say that the United States should have appeased Japan in any way during the interwar period. But in not knowing—and not caring that we did not know—we passed up many opportunities, beginning at the Washington Conference itself in 1921, to get Japan on our side.

So this is why the Pearl Harbor gospel is dangerous: in today’s Russia and China, we are dealing with large nations that we would rather stereotype than understand, and nations, furthermore, that want things that in the past have so often led to war. Before Pearl Harbor, the last great “American cousin” of Japan was Teddy Roosevelt. He knew how to practice his oft-quoted West African proverb about quiet speech and a big stick. Yet the gospel still throws shade on Teddy for being Japan’s friend.

Yet in approaching China and Russia today, we might take at least a page from him and find a truer, if less smugly satisfying, gospel for December 7.

Michael Vlahos is a professor of Strategy and War at the Johns Hopkins University. He also appears weekly on the nationally syndicated John Batchelor Show.