Pelosi and Amash Clash Over the "I" Word 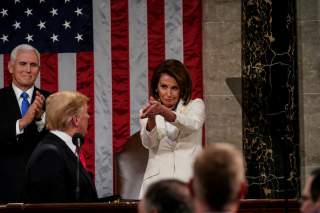 Ever since the Democratic Party won control of the House of Representatives in November, Nancy Pelosi has continually stated that impeachment is not on the agenda and that the party’s goal is passing legislation and preparing for the 2020 elections. The House Speaker continues to hew to this line, despite the increasing disagreements of her fellow party members. While a poll conducted last month said 39 percent of Americans favor impeachment hearings, a full 70 percent of Democrats believe that should be the next move.

This has left Pelosi juggling the different party factions, a job she’s carried for over a decade. “Let me be very clear: the president’s behavior in terms of his obstruction of justice, the things that he is doing, is very clear. It’s in plain sight. It cannot be denied. Ignoring subpoenas, obstruction of justice. Yes, these could be impeachable offenses,” she told reporters, emphasizing that she does not think the administration is innocent. She followed it up, however, by repeating that impeachment is not a goal. “You might understand it better if you remember these three things. We want to follow the facts, to get the truth to the American people with a recognition (2) that no one is above the law, and (3) that the president is engaged in a coverup. And that is what my statement is.”

“And I do think that impeachment is a very divisive place to go in our country,” she added.

For Pelosi, strategy much take precedence over principle. Learning from Bill Clinton’s impeachment, which improved his popularity among an unconvinced public, the Speaker does not want to risk increasing President Donald Trump’s odds of reelection in 2020. She would prefer to defeat him at the ballot box. She believes that the president secretly wants impeachment proceedings to begin, which would give him fodder on the campaign trail. “The White House is just crying out for impeachment. That’s why he flipped yesterday; he was hoping.”

She bucked against the idea that there was disagreement among the Democrats and put on a strong face. “Somehow or other you all [the media] have a story that isn’t real. I mean, you want to believe there’s all this unease in our caucus. That simply isn’t the truth. We have respect for the diversity of opinion in our caucus, and I say to the caucus, our diversity is our strength. Our unity is our power. And we have unity in our caucus.”

Daniel McCarthy, editor of Modern Age, thinks Pelosi will be able to keep the troops in order. “Pelosi will hold the line, I expect. She knows Democrats can milk multiple headlines from investigations on several fronts, rather than knocking everything else out of the public eye with impeachment. She wants to kill the Trump administration by a thousand cuts, not a decapitation strike,” he told the National Interest. “And she can switch strategies whenever she wants: if the administration isn't crippled and terrified enough come next spring, she can ‘give in’ to impeachment demands, which for partisan reasons won't go away, no matter what happens between now and then.”

When Nancy Pelosi moves away from impeachment, Congressman Justin Amash (R-MI) has doubled down on it. Becoming the first Republican legislator to support impeachment a week ago, Amash reiterated his conclusions in another twitter thread yesterday.

Amash has been one of the most consistent libertarian Republicans in Congress since he was elected in the 2010 Tea Party wave. Getting in front of Democratic leadership on the impeachment issue has dramatically increased his media profile, which other libertarians see as a mixed bag. Some believe it shows libertarians are above two-party partisanship and are willing to put principle above self-interest. Others believe Amash has made the debate about himself, and not expanding liberty. Other libertarians in Congress, like Thomas Massie (R-KY) and Rand Paul (R-KY), have successfully walked the line between criticizing the administration and holding the president’s ear. Amash never even attempted to get on the tightrope.

Some speculate that there are, in fact, plans being laid. Amash, never friendly with the party establishment, has faced numerous primary challenges in the past. Next year, after the 2020 census, it’s expected that he’ll be gerrymandered out of his district, making reelection exceedingly difficult. This removes the biggest consequence, whether Amash spurned the administration or not. And the thirty-nine-year-old native of Grand Rapids hasn’t ruled out running for president under the Libertarian Party banner. Having nominated the formerly GOP gubernatorial ticket of Gary Johnson and Bill Weld (who has returned to the Republican fold and is challenging Trump in the 2020 primary), the Libertarian Party is partial to former Republican officials.

McCarthy does not believe a Libertarian Party nomination is what’s motivating Amash. “Justin Amash is the farthest thing from a scheming, Machiavellian political strategist. He's naive. He reads laws before votes on them, and he votes on every piece of legislation. That's admirable, but it's also indicative of his overconfidence in procedure,” he said. “His procedural idealism is also why he's the lone Republican who wants impeachment. Trump is obviously not a stickler for procedure, and that offends Amash . . . He's not only ruined his own career in the GOP, he's done damage to the constitution by supporting the forces that want to replace it with unaccountable administrative police power.”