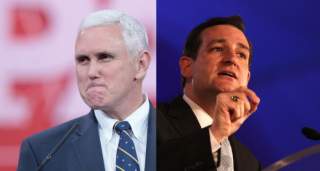 Everyone is still buzzing about the third night of the Republican National Convention, during which two prominent conservatives made starkly different judgements about Donald Trump and how best to advance their own political futures in the party he has roiled.

Ted Cruz, the Texas senator who leads conservative firebrands in Congress and came up short in his own presidential bid, refused to endorse Trump for president in his primetime speech.

Mike Pence, the Indiana governor who once led conservative firebrands in Congress at a time when they were few and far between, accepted the nomination for vice president and in the process made the case for why the right must stand with Trump.

Cruz was built for these moments. He probably orders breakfast like he is delivering the Gettysburg address. The more unassuming Pence rose to the occasion, however. He blew the other people on Trump’s vice-presidential shortlist away, although he did have two of the best Republican speechwriters working with him.

Cruz in all likelihood upstaged Pence because the media hates Trump, loves conflict and gets excited about anything that keeps party conventions from being boring affairs; Trump and his supporters also ensured that Cruz would be the bigger story, because they hate criticism, love conflict and believe all publicity is good publicity.

Imagine what last night’s drama could do for tonight’s ratings, when Trump himself is set to accept the Republican presidential nomination?

But it’s also easy to imagine another scenario: what if Trump made speaking at the convention contingent upon an endorsement, which would be well within political norms to do, or at least booted Cruz out of primetime if he wasn’t going to give one?

Without Cruz’s speech, all the focus would have been on Pence. The storyline would be what a great night Trump had, with Scott Walker and Marco Rubio coming around to support the nominee, House Speaker Paul Ryan giving an enthusiastic introduction of Pence, who then stook the stage and hit it out of the park.

Instead the story is about convention chaos, dissension in the Republican ranks and people lashing out angrily at Cruz, who never once criticized Trump in his remarks or said anything necessarily unhelpful to the ticket. The words “I endorse Donald Trump” just were not forthcoming.

Pence likely sincerely believes as a social conservative that a Republican victory is necessary in this year’s election, even with an imperfect nominee. Hillary Clinton could deliver the Supreme Court to the left for a generation. The Democrats have adopted a more pinched view of religious liberty and have moved left on marriage and abortion, promising in their platform to even repeal the forty-year-old Hyde Amendment restricting taxpayer funding.

The Indiana governor also appears to be betting that the best way for him to get to the White House is running with Trump. If Trump wins, he will be the front-runner for the Republican nomination in four to eight years. If Trump loses, Pence will still be the candidate best positioned to united the Trump and Cruz factions, which received the vast majority of votes in this year’s primaries.

Cruz is probably genuinely offended by Trump’s slurs against his wife and father. Even if he is not, these insults gave him the perfect opening to withhold his endorsement. Cruz is betting that Trump will lose and he can win over anti-Trump Republicans who would otherwise have preferred Rubio. He can claim credit for having tried to warn his party away from electoral disaster, especially if Trump loses badly.

The risk for Pence is that he will be tainted if Trump loses or wins but is a bad president. The risk for Cruz is that Trump doesn’t lose by a wide margin but is only narrowly defeated, in which case much of the base may blame party disunity and the Republicans who failed to get on board for the new Clinton administration.

Trump is also taking a risk. He knew Cruz would not endorse him. He let him speak anyway, in one of the premium slots. He could have downplayed the incident and, like Newt Gingrich directly following Cruz, spun the senator’s lack of direct criticism and exhortations to vote for conservative principles in November as a sort of quasi-endorsement.

Instead Trump has decided to keep the fight going, as is his wont. This is partly because he is thin-skinned and partly because he knows it generates attention. The question is whether this is the kind of attention he should want to cap a convention that is supposed to be a prolonged commercial for his candidacy.