The Pentagon’s China Report: Reading Between the Lines 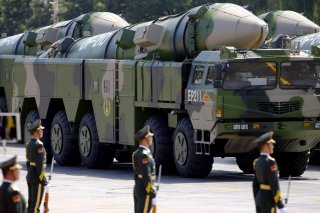 In early November, the Defense Department released its long-awaited report on “Military and Security Developments Involving the People’s Republic of China.” With its lengthy list of Chinese military and security advances in recent years, the report, mandated by Congress, could be read as presaging the emergence of a dangerous military competition that could threaten catastrophic war, but history tells us that’s not how this report should be read.

While it is correct that China’s efforts to increase its military strength pose significant challenges, reading them only in terms of a Cold War-like confrontation ignores important aspects of the issue and could inadvertently increase the danger. A look at some top headlines reveals a problem: The New York Times publicized, “China Could Have 1,000 Nuclear Warheads by 2030, Pentagon Says.” The Washington Post featured, “China accelerates nuclear weapons expansion, seeks 1,000 warheads or more, Pentagon says.” Fox News added, “China’s nuclear stockpile growing at ‘accelerating pace,’ will have 1,000 warheads by 2030: Pentagon.”

However, the Pentagon’s new 173-page report obscured important elements of the picture behind the headlines. For example, most of the media analyses of the report focused on the prediction that China could have as many as 1,000 nuclear warheads by the end of the decade, compared to the number of warheads, estimated between 200 and 350, that they have right now.

The report also neglected to mention the United States’ current stockpile of 3,800 nuclear weapons and a total inventory, including retired warheads awaiting dismantlement, of 5,500 nuclear weapons. Thus, even under the most pessimistic scenario in which the Chinese move ahead with their nuclear weapons program, the United States will have a more than a three-to-one advantage over China’s nuclear forces in numbers and an even more significant edge in terms of technology.

Moreover, while Beijing may have the capacity to build up its nuclear weapons stockpile, it remains unclear that Chinese leaders have made the political decision to move forward with the very expensive maximal expansion of their nuclear weapons complex.

Another partial truth: the report states that China “has numerically the largest navy in the world with an overall battle force of approximately 355 ships and submarines.”

That number may be true if you count tugboats and nuclear-powered aircraft carriers in the same tally. Brookings Institution’s Michael O’Hanlon points out that, “The United States has much larger and more sophisticated ships than China.” China’s navy is built primarily for its territorial waters, while the United States has a worldwide naval presence and capabilities. O’Hanlon suggested that looking at the count from another angle, the U.S. Navy has at least a two-to-one advantage in tonnage over China and at least a ten-to-one lead in carrier-based airpower over China, assuming China can successfully operate aircraft from its ships at all.

More clear-eyed analysis of China’s economy tells a different story. Two scholars at the conservative American Enterprise Institute writing in Foreign Policy called China “a declining power” and wrote, ”The Chinese economy has been losing steam for more than a decade: The country’s official growth rate declined from 14 percent in 2007 to 6 percent in 2019, and rigorous studies suggest the true growth rate is now closer to 2 percent.” If China is indeed steadying, it is doing so at a low ebb.

The Foreign Policy article noted that China’s aggressive policies in Asia and elsewhere and human rights abuses have produced a negative reaction in many countries:

Countries worried about Chinese competition have slapped thousands of new trade barriers on its goods since 2008. More than a dozen countries have dropped out of Xi’s Belt and Road Initiative while the United States wages a global campaign against key Chinese tech companies—notably, Huawei—and rich democracies across multiple continents throw up barriers to Beijing’s digital influence.

Rising concerns about Beijing’s monopolistic practices and abuse of international norms have undermined the markets it depends on to fuel continued growth and paint a gloomy picture for the future.

The Past is Prologue

It is the Pentagon’s job to be wary of potential threats and consider the worst-case scenarios for potential threats, but that does not mean that we should accept its warnings as the last word. We can, and should, learn from experience.

William Hartung of the Center for International Policy compares the current debate to the late 1950s when Democratic politicians and military officials railed against a supposed U.S. “missile gap” with Russia. The outgoing Eisenhower administration and the new President John F. Kennedy used the controversy to launch the United States on a massive intercontinental ballistic missile construction program.

The Pentagon’s China Report also follows in the footsteps of an annual Pentagon assessment in the 1980s, “Soviet Military Power.” In a cover letter for the 1988 narrative, Secretary of Defense Frank Carlucci warned: “Since 1981, virtually every component of Soviet military power has been expanded and modernized. Soviet military power and the threat it represents are not, then, abstract notions.” The notions may not have been abstract, but they proved ephemeral.

Within three years, the USSR had dissolved because of internal failings.

This is not to suggest that China will similarly disappear. It is instead to warn against relying only on a narrow analysis of the security situation when determining policy. The Cold War was won on the strength of alliances, free markets, and democratic values, not only by military spending. An effective policy response to China’s military buildup should consider all aspects of the situation, not just the potential numbers of nuclear weapons or ships, and employ all instruments of policy, not just the military.

John Isaacs is a Senior Fellow at the Center for Arms Control and Non-Proliferation, where he has worked on nuclear and national security issues since 1978.