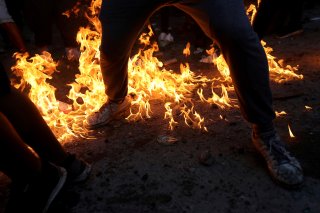 IF EVER the modern world faced a “perfect storm,” this is it. The combination of a deadly and highly infectious virus, an emerging worldwide economic depression, the collapse of global governance, and an absence of a coordinated and effective international response—all have contributed to a tragedy of historic magnitude, one that will not be easily overcome. While quarantines and self-isolation have helped mitigate the crisis, few believe that these measures alone can solve it, let alone provide a roadmap for the future.

How this storm will end remains unknown, beyond the virtual certainty that the world will eventually weather it. Eventually, a satisfactory remedy will emerge through some combination of vaccines, improved treatment methods, social distancing, and new mechanisms of international trade. Exactly when and how this solution will be arrived at is difficult, if not impossible, to predict. But it is clear that the internecine political feuding that has consumed America and diverted its attention from dangerous threats must come to a halt. The costs have been enormous.

At the same time, the general approach of governments around the world of narrowly defining their priorities created a climate and context in which the virus emerged and in which necessary precautions were ignored. Ending the pandemic requires effective responses, both individual and collective, from key political and economic powers such as the United States, China, the European Union, Russia, Great Britain, and Saudi Arabia. For any broad solutions to emerge to combat the coronavirus and to prepare the world for similar challenges in the future, we must first explore why and how this unprecedented medical, political, and economic threat developed.

ONE LESSON we should learn is the primacy of sovereign states. The notion that sovereignty is outdated is itself outdated. It is patently obvious that the pandemic is prompting governments to focus on their national interests first. Only on that basis can they then seek to engage in international cooperation. However, the governments of the great powers should acknowledge their collective culpability for failing to identify global priorities and instead taking imprudent steps that diverted attention from issues of major global concern in favor of non-essential and outright cavalier pursuits. Even less justifiable was the near destruction of the international system designed to create and enforce a rules-based mechanism of international trade, and the weaponization of global commerce by states to promote their unilateral interests, subjective values, or domestic political ambitions. Institutions like the UN, World Trade Organization, and World Health Organization (WHO) are not a panacea for world ills. But they can provide useful, if limited, signals ahead of trouble and serve as shock absorbers for international disagreements. As Henry Kissinger has eloquently expressed in the Wall Street Journal, “No country, not even the U.S., can in a purely national effort overcome the virus. Addressing the necessities of the moment must ultimately be coupled with a global collaborative vision and program. If we cannot do both in tandem, we will face the worst of each.”

It is not as though we couldn’t have seen this coming. In the past twenty years alone, there were three major global outbreaks of deadly viruses: SARS from 2002–2004, H1N1 in 2009–2010, and Ebola from 2013–2016. None of these outbreaks created the type of global devastation we currently face, as these viruses lacked the specific combination of lethality, ease of transfer, delayed manifestation of symptoms, and the lack of vaccines and widespread testing infrastructure which allowed the coronavirus to thrive. But each epidemic made clear the prospect for global disaster.

In a globally connected world with increasingly interdependent economies and an unprecedented high-speed flow of both people and goods across the world, it did not require an excessive imagination to foresee the risk of a future pandemic. Indeed, international bodies such as the World Health Organization, non-profits such as the Bill & Melinda Gates Foundation, and domestic government agencies such as the Center for Disease Control all sounded the alarm on the lack of preparedness. The 2019 Worldwide Threat Assessment of the Intelligence Community, issued by President Donald Trump’s own Director of National Intelligence, warned “that the United States and the world will remain vulnerable to the next flu pandemic or large-scale outbreak of a contagious disease that could lead to massive rates of death and disability, severely affect the world economy, strain international resources, and increase calls on the United States for support.” However, none of these warnings developed any real political momentum in the United States or elsewhere. Instead, they were simply registered and discussed in passing.

Like most countries, the United States tended to address immediate challenges that had receptive audiences at home. Congress devoted much of its energies to debating the use of economic sanctions against any nation that did not comply with America’s perceived interests and values, regardless of whether that state was a true threat to America’s national interest, or even whether these “values” were backed up by a domestic political consensus. With the Trump White House continuing the pattern of post-Cold War administrations to employ trade as a political weapon which could be used to achieve both international and domestic goals, major trade confrontations quickly followed. The European Union went even further, determining that its mandate expanded far beyond the questions of tax and economic policies which inspired its inception. Instead, the EU sought to impose its values beyond its borders, including with relying on force in the Balkans, where Europeans had strong political opinions but limited geopolitical and economic interests. The world’s most powerful nations began thinking not in terms of their fundamental national priorities, but, rather, how they could maximize their immediate competitive advantages.

Domestic problems also crowded out any space for action on this issue. Contrary to what George H.W. Bush said about America becoming a kinder, gentler nation, what we need is for it to become tougher and more focused. Consider illegal immigration. The liberal social engineering engaged on immigration—most prominently by the Obama administration—ensured that cities and states devoted precious resources to integrating illegal immigrants, both in terms of education and healthcare costs. Had America not expended huge sums on those who were in the United States illegally it would have had the resources to focus on looming threats such as a pandemic. The pandemic illustrates that America cannot indulge in what seems desirable, but must remain alert to top threats and challenges. In the increasingly politically polarized United States, inattention to viral threats was one of the few matters which crossed party lines. While congressional Democrats focused heavily on the threat posed by climate change, no such call to action emerged to address the demonstrable threat of global pandemics. Furthermore, since Trump was elected president, the Democrats adopted a “take no prisoners” war against the administration, culminating in February’s failed attempt to remove the president from office, which many Republicans interpreted as little short of an attempted coup. Trump easily survived impeachment and, until the virus became an epidemic, was on something of a roll. But with so much of his administration’s attention constantly turned toward waging partisan struggles, there was little push from inside the White House to focus the federal government’s energy on less obvious but still existential threats. There were senior officials in the Trump administration who sounded alarms about the pandemic danger but went unheeded. Festering partisanship rendered any attempts at long-term planning wholly unrealistic.

WHILE THERE are hopeful signs coming from China and elsewhere that social distancing and carefully designed quarantines can work, the time and the economic and human sacrifice needed for these measures to end the crisis are impossible to predict. The president appears to believe that he can master this crisis in a matter of weeks, and there is something to be said for projecting hope and optimism to a country that is currently short on both. What is not acceptable, however, is to act cavalierly upon these optimistic assumptions. As Dr. Anthony Fauci suggests, when it comes to health crisis contingency planning, the only correct approach to the current crisis is to assume the worst precisely in order to avoid it. For a country as rich as the United States, there is no good reason not to spend the requisite funds to acquire any equipment, supplies, and manpower needed to prepare for this worst-case scenario. Should this money prove to have been spent needlessly, it would still pale in comparison to the costs that would be incurred should the worst come to pass.

Finally, America requires an effective communication strategy. Congress, the administration and the Democrats’ likely presidential nominee Joe Biden cannot reasonably be expected to speak with one voice, especially during an election year. However, it is not unreasonable to expect the Trump administration to present a clear, unified message to the American people. Every day, Americans receive multiple contradictory statements from the administration about the nature of the crisis, the government’s response, and what is expected of them. This confusion, often highlighted by the media, is unacceptable, and it is the responsibility of the president to put an end to it.