A Permanent Home for Eurasia-Wide Dialogue 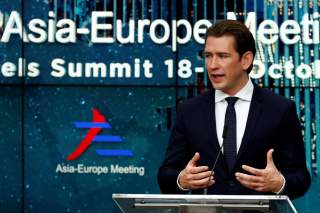 For centuries, Europe and Asia have been considered separate worlds, with little credence given to the idea of Eurasia being a single continent. But in an era of globalization, jets have slashed the time between the two—in effect, shortening the distance as well. This means the moment has come to reconsider our understanding of what Eurasia means in the twenty-first century. Europe and Asia no longer exist in isolation due to the interlinked and interdependent economic, social and other processes taking place on their territories. This is clearly understood in Europe and Asia. One of the aims of China’s Belt and Road Initiative is to connect the two regions through railways, roads, and seaports. The European Union’s strategy of closer links between Europe and Asia, announced in September 2018, pursues the same objective.

A Eurasian-continent-wide dialogue is needed to synchronize these efforts—a forum where the two sides can come together and exchange visions on common issues. As a place where Europe and Asia meet, Kazakhstan would be a great venue for such a dialogue. In addition to its location, the country has proven its commitment to international peace and security by becoming a nonpermanent member of the UN Security Council in 2017–2018, by regularly hosting Syrian peace talks in Astana, and by actively promoting nuclear nonproliferation.
There are at least three reasons why Kazakhstan is the right place for a Eurasian-focused dialogue.

First, Central Asia is in the center of Greater Eurasia. The region connects the east with the west and the south with the north. The existing and future transcontinental infrastructure linking Europe and Asia is to pass through Kazakhstan’s territory. Beyond Kazakhstan, Central Asia as a whole has the potential of becoming a transportation-infrastructure hub between Europe and Asia.

Second, Central Asia has proven to be one of the most stable regions on the Eurasian continent. Despite lots of predictions since the early 1990s that instability and chaos would envelop the region, the countries of Central Asia have proven their sustainability. Uzbekistan’s recent opening to the region has improved the climate of cooperation even further. The political stability ensures the safety of the transportation routes that are criss-crossing Central Asia—and that are increasing in scope.

Finally, Kazakhstan has demonstrated the political will to be the bridge that connects east and west. In fact, the idea of Eurasianism has long been at the core of Kazakhstan’s foreign policy. The country’s president, Nursultan Nazarbayev, proposed the Eurasian Economic Union in 1994—a dream that was finally realized after he had promoted it tirelessly for twenty years. Moreover, he has repeatedly called for synchronizing the efforts of the European Union, the Eurasian Economic Union, China’s Belt and Road Initiative, and ASEAN’s programs as a way of increasing cooperation in Greater Eurasia. In essence, what he is proposing is integrating  existing integration efforts—a move that would benefit all parties involved.

Whether all those with interests in Eurasia are ready to put aside their differences and start a comprehensive dialogue based on the principle of equality is still unclear. What is clear is that Kazakhstan wants to continue its efforts in this direction. The Astana Club, an organization that has been promoting peace and cooperation between Europe and Asia, is Kazakhstan’s candidate for a permanent platform for Eurasian dialogue.

The fourth meeting of the Astana Club occurred in November of this year. The theme had something for everyone: “Toward a Greater Eurasia: How to Build a Common Future?” More than fifty well-known politicians attended, including Ahmet Davutoglu, the former prime minister of Turkey; Jose Manuel Barroso, the former president of the European Commission; and Hamid Karzai, the former president of Afghanistan. Other ex-heads of state and government showed up as well, along with distinguished experts from about thirty countries. Their mandate was to share ideas about the challenges facing Greater Eurasia—and potential solutions.

This year’s Astana Club gathering included an important new feature: a list of Global Risks for Eurasia in 2019. It consisted of the ten risks most likely to affect the continent in the coming year. They fell into four main areas. One such area is that ongoing geopolitical competition among key countries will further destabilize the world order and disrupt the global balance of power. This year has seen an escalation of tension between the United States and China unprecedented in modern history—one that could easily damage all avenues of cooperation between the two countries. Moreover, the standoff between Russia and the West is becoming worse, with growing layers of disagreement: Crimea, the conflict in eastern Ukraine, the Syrian War, accusations of Russian interference in U.S. elections, the Skripal poisoning case in Britain, and the U.S. threat to pull out of the Intermediate-Range Nuclear Forces Treaty. The recent clash between Russian and Ukrainian naval ships in the Azov Sea adds yet another layer.
Experts worry these tensions will lead to a new arms race. However, this time it would be between not two, but three, powerful actors—the United States, China and Russia.
In the context of worsening relations between global powers, the second cluster of risks is that new kinds of warfare are surfacing. They have developed because the major powers know that straight-up military clashes would be catastrophic.

Take the situation in the Middle East, for example. America’s withdrawal from the Iranian nuclear deal and reintroduction of sanctions against Tehran could prompt Iran to retaliate. Iran also has a lot at stake in Syria and Yemen—two places where major conflicts are far from being resolved. Reverberations from the Middle East are a potential flash point for Eurasia, where the interests of both regional and global powers intersect. Moreover, tension between Ukraine and Russia is intensifying, the Afghan government continues to lose territory to the Taliban, and the dispute between Azerbaijan and Armenia over Nagorno-Karabakh continues, with both sides accumulating more weapons.

In addition to these problems, the potential for new outbursts of separatist and ethno-religious conflicts—similar to the one in Myanmar in 2018—is always lurking in the background. Even relatively stable Europe faces this risk. The level of separatist sentiment in Scotland has grown, which is an indication that Brexit may be having a domino effect on other countries.
A fourth group of risks to Eurasian stability is a nontraditional one: environmental disasters, which do not recognize state borders. Increasing tension over ecological and water issues seems to be inevitable over the long term unless energy-intensive economies such as the United States, China, and India find the political will to confront the problem. The situation is likely to be worsened by man-made ecological catastrophes. This is especially true in developing economies, where environmental and safety regulations are often ignored and where there is a shortage of technology and skilled people to deal with the problems.

The four areas of risks that the Astana Club identified reflect fundamental transformations happening in the world. These challenges to world order are serious, and the answers to them are not obvious. The Astana Club would like to help by becoming the objective and independent platform for a Eurasia-wide dialogue—a place where all parties can come together to discuss not only problems, but ways to solve them.

Yerzhan Saltybayev is the director of the Institute of World Economics and Politics under the Foundation of the First President of the Republic of Kazakhstan —​ Elbasy.