Petroleum Powerhouse: Why America No Longer 'Needs' the Middle East 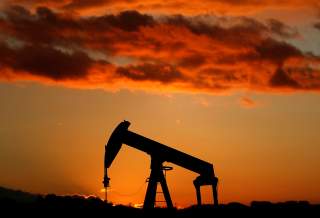 Energy is vital to America’s security and prosperity. During the Cold War, the United States had strong interests in ensuring the Middle East was not dominated by the Soviet Union—we couldn’t risk a major disruption to the global oil market, which was once dominated by the Persian Gulf. But today, there is no threat to the region from any hegemon. Not only that, but also the world energy balance of power has shifted dramatically. With a vastly different geopolitical reality, U.S. foreign policy should modernize and recalibrate, starting in the Middle East.

Saudi Arabia’s massive state-owned oil company, Saudi Aramco, just issued debt—about $10 billion worth—in the form of bonds sold to investors. But before investors lined up to buy, they had to kick the tires, and the documentation banks have provided offers a rare look at the state of oil production in Saudi Arabia.

The “stand out” of the bond prospectus is that the Ghawar oil field, once the world’s most productive, is dwindling. Today, it produces only a quarter of its capacity from fifteen years ago. This means that Saudi Arabia’s overall capacity to produce crude oil is likely declining.

Meanwhile, America’s Permian shale oil reservoir has officially become the world’s biggest, producing more than four million barrels per day. The Permian’s dominance is emblematic of the massive shift in world energy production over the last decade: America is now the world’s top oil producer. This, along with the massive shift in geopolitical reality that was the end of the Cold War—where it was essential to keep the Soviets from dominating global oil production—has drastically reduced the importance of the Middle East. U.S. foreign policy has yet to adjust accordingly.

Once, much of the United States’ oil was inaccessible because it was trapped in shale rock, deep under the earth’s surface. But about a decade ago American energy producers began applying the new technology of hydraulic fracturing and horizontal drilling—previously only used to access natural gas—to access oil trapped in shale rock formations like those in the Permian reservoir.

Aided by private property rights and the rule of law, production boomed. U.S. crude output more than doubled, and America now has more recoverable oil reserves than any other country in the world—including Saudi Arabia and Russia, which hold the number two and number three spots, respectively. In the next five years, American oil exports should also surpass Saudi and Russian exports, even though we domestically consume far more energy than either of these nations.

This U.S. energy revolution should profoundly impact our foreign policy, but because of intransigence and groupthink in Washington, it hasn’t—yet.

Today, because policymakers overvalue the strategic importance of the Middle East, there is an irrational fixation on Iran. That has led us to effectively take sides in a 1,400-year-old religious war between Sunnis—led by Saudi Arabia—and Shias—led by Iran.

Policymakers in Washington have gone so far as to turn a blind eye when Sunni countries like Saudi Arabia fund and export the extreme form of Islam responsible for 9/11, and fund terror groups who continue to commit atrocities in places like Syria’s civil war. For their part, U.S. policymakers have (accidentally) armed Sunni terror groups that are affiliated with Al Qaeda, such as the Nusra Front, because these groups are fighting allies of Iran.

America also continues to support the Saudi war effort in Yemen’s civil war, where the Saudis and Yemen’s Sunnis are fighting the Iran-backed Houthi rebels (who are Shias). America arms Saudi forces and facilitates their air war, despite the Saudi record of indiscriminately bombing civilians and aiding Al Qaeda in Yemen.

As a result, tens of thousands of Yemeni civilians—woman and children included—have been killed and maimed, while hundreds of thousands starve—all to prevent a return to the mostly Shia-Sunni split of Yemen into two countries, which existed only a few decades ago. In other words, to fight nationalist Houthis who want their own country.

Enough already. It is not in America’s interest to be picking sides between Saudi Arabia and Iran. The status quo leaves us with less leverage over either side and has consistently placed us in morally dubious situations that run counter to short and long-term American interests. Overall, the Middle East is of diminishing strategic importance, and it’s time to properly order America’s global defense priorities. We must reassess what matters—and what doesn’t.

Yes, America needs the capability to protect the global commons, which includes the choke points through which much of the world’s crude supply flows. It is perfectly reasonable, for example, to help negotiate a settlement in Yemen’s civil war to ensure Sunni control of the land directly adjacent to the Bab-el-Mandeb strait, a choke point for Saudi oil shipments. It is likewise reasonable for the United States to keep Iran, or any other power, from mining the Strait of Hormuz, another choke point through which much of the world’s oil supply flows.

The rationale for our tight relationship with Saudi Arabia, warts and all, was based on Cold War realities. But the Cold War is over, and the United States is the world’s new petroleum powerhouse. Our foreign policy should be based on the realities of the world today, rather than decades ago. Things have changed, and they should change in Washington, too.

Willis L Krumholz is a fellow at Defense Priorities. He holds a JD and MBA degree from the University of St. Thomas, and works in the financial services industry.