Phase One of Trump's Trade Deal Is a Win for America 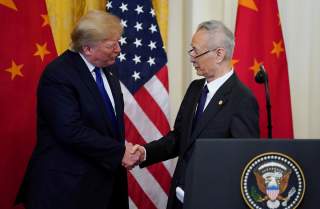 It was Charles Maurice de Talleyrand, one of Europe’s diplomatic masterminds and a survivor of the French Revolution and Napoleon Bonaparte’s rise and fall, who stated: “Speech was given to man to disguise his thoughts.”  Talleyrand would have enjoyed the pomp and ceremony surrounding the signing of the Phase One trade deal between China and the United States at the White House on January 15, 2020. There were a lot of speeches, but the decoupling of the U.S. and Chinese economies is still in motion; Phase One is a truce in a much longer struggle for global mastery between the world’s two major powers, the United States and China. There are serious questions as to whether Phase Two will ever be negotiated to the satisfaction of either party. And it is likely that both President Donald Trump and his Chinese counterpart, Xi Jinping, know this.

At the White House ceremony, Trump said that “together we are righting the wrongs of the past and delivering a future of economic justice and security. For behind even this deal, it is going to lead to an even stronger world peace.” For their part, Chinese officials painted the Phase One deal as a “win-win” solution. According to China’s Vice Premier Liu He, who signed the deal on behalf of China, the agreement was rooted in “equality and mutual respect”.

Five key areas stand out in Phase One. China has committed to increasing its U.S. imports by at least $200 billion over 2017 levels, raising purchases of agricultural goods by $32 billion, manufacturing by $78 billion, energy by $52 billion and services by $38 billion. At the same time, China has agreed to make a greater effort against counterfeiting and make it easier for companies to pursue legal action over copyright theft. Moreover, the United States will maintain up to 25 percent tariffs on an estimated $360 billion of Chinese goods; China has levied new tariffs on $100 billion worth of U.S. products and is expected to maintain most of them. A fourth item is the language that addresses competitive currency devaluation, indicating that both countries reserve the right to request the International Monetary Fund (IMF) to intervene. And the fifth item is that China agrees to remove barriers to help U.S. banks, insurers, and other financial services companies to expand into the Chinese market.

The reality is that Phase One is a truce, a badly needed one for Trump and Chinese president Xi Jinping. For the former, the trade deal allows him to campaign for re-election having promised to act tough with China and produce an agreement that levels the playing field (or at least reaches in that direction). Moreover, the U.S. economy has remained strong throughout the trade war, with real GDP hitting 2.9 percent in 2018 and 2.4 percent in 2019, which gives the U.S. leader another plus factor in what is likely to be a nasty presidential campaign, served out to a political backdrop of a bitter impeachment trial.

For Xi, the trade deal is highly important; unlike his U.S. counterpart, the Chinese leader cannot say that his economy has enjoyed strong growth. Chinese real GDP growth slipped from 6.8 percent in 2018 to 6.1 percent in 2019 and is set to dip under 6.0 percent in 2020 (according to the IMF). Although some of China’s slowing in economic activity can be said to have come from structural reforms, the cooling in trade clearly hurt. And Xi faces other factors, ranging from an outbreak of African swine fever, which has culled close to half of China’s hog herd and is putting pressure on inflation from rising food prices, to environmental problems pertaining to breathable air and clean water. Xi’s other headaches are the pro-democracy movement in Hong Kong and Taiwan, which is where President Tsai Ing-wen, the pro-independence leader, easily won re-election in early January 2020. Phase One gives Xi a badly needed truce in an area critical to China, trade.

The Phase One trade deal is also important for the rest of the global economy. According to the IMF, as global trade cooled as a result of the Sino-American trade war (and other trade disputes), the world's real GDP growth rate dropped from 3.8 percent in 2017 to 3.0 percent in 2019. One of the most hurt regions was the Eurozone, which saw real GDP growth slip from 2.5 percent in 2017 to 1.1 percent in 2019. Consequently, the Phase One trade deal injects confidence that the globalized structure of trade is still partially intact and probably enough to keep world economic growth afloat.

Phase Two represents a much more difficult challenge. The Phase One document is 86 pages, considerably shorter than the 150-page document that was gutted by hardliners in Beijing in May 2019. This is because many of the structural issues were left for later. While Phase One pulled China and the United States back from a more damaging breakdown in trade relations, which would drag down the rest of the global economy, the issues left off the table are perhaps are beyond finding accommodation. In particular, Phase Two touches upon the core of the Chinese development model, “market-Leninism.” This is a market-based economy with a heavy state role, but with a sizeable private sector (though Communist Party officials are likely to be embedded in the management structure of key companies and exhibit a shadowy influence over management). Moreover, China’s long-term goal is to take the commanding heights of the global economy, which means gaining cutting edge technology in such areas as artificial intelligence, facial recognition, space travel, and 5G technology.  The trials and tribulations of Huawei reflect China’s commitment to tech dominance and also American push-back. As the development of these technologies is costly, the Chinese state has been willing to provide low-cost loans and provide preferential treatment in obtaining contracts. It is hard to see Beijing’s leadership giving up its aspirations of making China great again, creating a modern version of the Middle Kingdom of dynastic history.

In addition to the very different approaches to each country’s political economies, China and the United States face a number of potential geopolitical flashpoints. These include China’s push to assume control of the South China Sea; U.S. support for what Beijing sees as a “breakaway province,” Taiwan; American sympathy for the pro-democracy movement in Hong Kong; the Belt and Road Initiative in Eurasia and its extensions into the Caribbean and Latin America (including Cuba and Venezuela); and China’s willingness to trade with Iran. It also raises questions over any new bouts of cyber-hacking of U.S. companies and federal government agencies and local governments.

There are two last points worth considering that point to the tough path for any Phase Two deal. First, some tariffs are likely going to remain in place over the long-term (there will be no return to conditions prior to the advent of the trade war). The strategic decoupling of the world’s two largest economies is likely to be a long-term process but controlled by some mechanisms such as trade deals, like Phase One. No one wants a complete breakdown, but the Trump administration has sought to create a more level playing field and called many Chinese practices into question. Decoupling is part of this process. The second point is that most of the rearrangement of global supply chains away from China by U.S. companies that has already occurred is likely to remain in place. Conversely, there is a greater sense of urgency in China to be less dependent on U.S. technology.

Despite the major questions over a Phase Two deal, the Phase One trade deal is a net positive. It is important to note that many U.S. companies will remain committed to being in China’s market and Chinese companies are of the same mind about being in the U.S. market. The new deal provides greater clarity as to the rules of the game. This begs the question: who got the most from the deal? Perhaps the words of a Chinese source familiar with the negotiations got it right: “It’s been said that [the deal] is all concessions by China, but postponing dealing with the structural issues is a concession by the U.S.”

No doubt Talleyrand would have concurred.