The Philippines Is the Frontline in the U.S. Competition with China 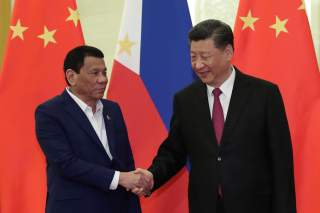 Philippines president Rodrigo Duterte was in China at the end of last month for his fifth trip there as president. He faces increasing domestic pressure for his conciliatory approach to China, so all eyes were on whether he would keep his promise to raise the 2016 UN tribunal ruling in the Philippines case against China, which had largely found in the Philippines’ favor. He did, but Chinese president Xi Jinping reiterated that Beijing did not recognize the award. This was a repeat of their interaction in April when Duterte broached the South China Sea while attending the Belt and Road Forum. Manila was then expecting more than $18 billion worth of deals to be signed. In both cases Duterte did not press the issue.

The Philippines is on the frontline of U.S.-China competition. This has, in some respects, benefited the country. Washington is paying increased attention to the Philippines: in March, Washington clarified that the reference to “Pacific” in the U.S.-Philippines mutual defense treaty included the South China Sea. Beijing lavishes promises of Belt and Road Initiative deals, though little has materialized. Top officials I spoke to on a visit to Manila in July take the view that Beijing looks ready to agree to a deal to cooperate on oil and gas development that would implicitly accept that the Philippines enjoys sole sovereign rights in its exclusive economic zone (EEZ). If so, Beijing did not show it cards at the recent bilateral: Xi merely called for the inter-governmental committee created to look into the possibility of joint exploration to prepare a “substantive program.”

Duterte has been rightly dogged in his determination to avoid war. But his anemic handling of China is flawed.

First, when a rules-based order comes tumbling down, so too do the bulwarks against open conflict. In such an event, weaker states, like the Philippines, and by implication its people, get the short end of the stick.

Second, Duterte’s approach falsely limits the Philippines’ options to complete submission to China or war. The reality is that between Scylla and Charybdis is a narrow channel that a good captain must navigate.

Third, war by design is unlikely. Beijing’s approach to the South China Sea has demonstrated a desire to take actions that stop short of provoking outright war.

What can the Philippines do, short of war, to stand its ground?

Second, words matter in defending rights. Duterte declared in his State of the Nation address in July that he had asked China to “please allow” Philippines fishermen to fish in the Philippines EEZ. A coastal state does not ask for permission to fish in its own EEZ.

Third, the Philippines should immediately call out objectionable behavior, including illegal fishing in its EEZ, denial of its fishing rights, and “swarming” activities aimed at intimidation. Neither calling out bad behavior nor sending in coastguard vessels to “fly the flag” are casus belli. Indonesia has punished illegal fishing by blowing up or sinking vessels, including Chinese ones; Vietnam has dispatched vessels to object to Chinese survey activities in its EEZ.

Fourth, the Philippines should continue to strengthen ties with the United States, including expediting progress under the 2014 Enhanced Defence Cooperation Agreement (EDCA), which allows the U.S. military to construct facilities, pre-position defense assets and deploy troops on a rotational basis on five Philippine military bases. Thus far, only one EDCA facility has opened.

Fifth, the Philippines must consider how to respond if China builds on Scarborough Shoal—a feature just over 200 miles from the country’s capital. Many I spoke to in Manila agreed that Beijing is calculating that it has a three-year window to consolidate its position with a China-friendly president in place.

Still, Duterte’s assertions that the Philippines can do nothing without a “massacre” is defeatist. Manila showed creativity in retaining control of Second Thomas Shoal in the Spratly Islands—in 1999, it deliberately ran an old naval transport ship aground. Creativity should similarly be applied to defending Scarborough Shoal.

Sixth, Manila must urge the Trump administration to communicate to Beijing, either privately or publicly, that building on Scarborough Shoal would be crossing a red line—the Obama administration did this in private communications. A Chinese base on Scarborough Shoal would hurt U.S. interests by complicating military planning and undermining U.S. credibility in the region.

Seventh, the Philippines should continuously raise the 2016 tribunal decision, which confirmed that coastal states in the South China Sea enjoy EEZs unencumbered by China’s nine-dash line or any claimed EEZ from features in the Spratly Islands. The August statement of the Philippines Department of National Defense was a positive step.

The award clarified that the Philippines is sovereign over Mischief Reef because it is a low-tide elevation within its EEZ. When Beijing repeats its false claim, as in its recent Defense White Paper, that “China exercises its national sovereignty to build infrastructure and deploy necessary defensive capabilities on the islands and reefs in the South China Sea,” the Philippines and others should remind it that sovereignty over these features is contested and China is squatting on at least one Philippine territory.

Unfortunately, Duterte muddied the waters by demanding that foreign vessels “notify and get clearance” to sail in the Philippines’ territorial waters. Foreign Affairs Secretary Teodoro Locsin Jr. clarified this month that the right to innocent passage is “absolute” and does not require permission—and that the president likely meant that permission could be sought between friendly nations.

The dispute over the South China Sea is about far more than rocks and reefs. It concerns the economic rights of ordinary Filipinos. More fundamentally, it strikes at the heart of the rule of law, which sets the terms of engagement between the Philippines, China and the United States on the South China Sea and on other issues. Long-term peace and prosperity depend on freedom from coercion and mutual respect between sovereign states, as well as the rules-based international order that undergirds it all. The Philippines must, in its actions, stand firm in defending these principles.

Dr Lynn Kuok is an associate fellow at the International Institute for Strategic Studies, a senior research fellow at the University of Cambridge and a visiting scholar at the Paul Tsai China Center at Yale Law School. She works on the politics, law and security of the Indo-Pacific, focusing on U.S.-China-ASEAN relations and the South China Sea dispute. She recently gave evidence before the UK House of Commons Defence Committee on the security situation in the “Far East.”