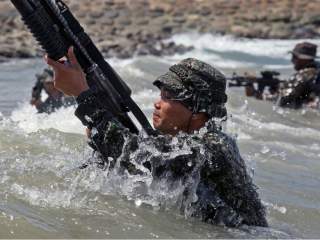 By May the Permanent Court of Arbitration will have finalized deliberations on The Republic of Philippines v. The People’s Republic of China regarding the South China Sea. The court is not expected to rule in favor of China’s Nine-Dash-Line claims and island reclamations.

Beijing is unlikely to take a negative ruling with equanimity. Therefore, either before the court issues its decision or in retaliation for an adverse ruling, China may declare another Air Defense Identification Zone (ADIZ), this time within the South China Sea.

China first established an ADIZ in the East China Sea in November 2013, amid ongoing territorial disputes with Japan and Taiwan. Stakeholders in the South China Sea have been wary of a possible Chinese ADIZ ever since.

A South China Sea ADIZ could cover all territory within the Nine-Dash-Line area or specified areas within the South China Sea, such as the Paracel and Spratly Islands. It may also extend over Scarborough Shoal, a main focus in the arbitrations and a site that Adm. John Richardson recently identified as “a next possible area of [Chinese] reclamation.”

For China, an improved force posture in the South China Sea (including its airspace) would allow it to better assert its claims to the region, muscling out the other claimants, which include Malaysia as well as the Philippines and Vietnam. Beijing must tread carefully, however, as these waters accommodate major energy and trade flows affecting much of the world’s economy.

Satellite footage from the Asia Maritime Transparency Initiative shows that China has taken several steps to militarize the islands, allowing them to be used for sea- and air-denial operations. Beijing has built radar stations to keep watch over regional air and sea traffic. They have also built long runways on several islands. If the Chinese should deploy fighters to those airfields, they would be able to conduct air patrols over 90 percent of the area. In February, the Chinese military deployed advanced HQ-9 surface-to-air missiles to Woody Island in the Paracels. With their 125-mile range, the HQ-9 poses a significant threat to any aircraft flying over that part of the South China Sea.

What happens if another ADIZ is established?

U.S. Pacific Command’s (PACOM) Adm. Harry B. Harris has already stated he’d ignore a South China Sea ADIZ just like PACOM ignored the ADIZ in the East China Sea. This may mean an increase in flights in the region by U.S. forces to show there’s no recognition of the ADIZ. The Philippines and Vietnam, and even Japan and Australia, may react by sending their coast guard close to China’s claimed islands or conducting flights through the ADIZ. China in turn may demand (either verbally or by show of force) that countries abide by their new rules for flying in the region, further increasing tensions.

Compared to the United States, Japan and Vietnam, the Philippines are poorly equipped to oppose a Chinese ADIZ (and associated territorial sea claims) in the region. The Philippines, like Vietnam, is increasing its military procurements from countries like Japan. Meanwhile, it can fall back on its security treaty with Washington.

Vietnam lacks any allies, leaving it more at risk of isolation in the event of escalating tensions with China. However, Vietnam already possesses equipment sufficient not only to test China but to reaffirm ownership over its own island reclamations.

Don’t expect the court’s ruling to reduce tensions. Foreign Minister Wang Yi has already announced that Beijing will not recognize the court’s findings if it sides in favor of the Philippines.

In settling the sea and air claims, China would prefer to deal with the other claimant states individually. Beijing continues to believe the United States is working behind the scenes to contain an emerging China, and that the majority of countries in the region side with Beijing in both its territorial claims and its view of regional stability. The Philippines and Vietnam are seen as engaging in “political manipulation” in getting the tribunal to take up the case, perhaps with the connivance of the United States.

Last year during the Shangri-La Dialogue, U.S. Secretary of Defense Ash Carter highlighted the importance of regional security—not just for the claimants to territorial waters in the South China Sea but for all states, given the importance of freedom of navigation and overflight. President Obama reiterated this view at the Sunnylands Summit with ASEAN leaders in February.

If Secretary Carter returns to the dialogue this June, it will be important to take several steps. He must highlight to the global community the tribunal’s findings as well as the negative effect China’s posturing is having on regional stability. He should also stress the importance of the Southeast Asia Maritime Security Initiative to the future of regional security. Most importantly, he should remind China of its commitments to various international agreements, including the Declaration on the Conduct of Parties in the South China Sea.

Chinese militarization in the South China Sea continues to be a strain on intraregional China relations. Regional stakeholders are concerned for the future as Chinese reclamations test the norms that have been established to date. It’s up to Washington and our regional partners to remind Chinese officials that any unilateral changes that might further aggravate the current security setting will not be accepted.

Riley Walters is a researcher in The Heritage Foundation’s Allison Center for Foreign and National Security Policy.