Pivot to Paraguay: America Has a New Preferred Partner in South America 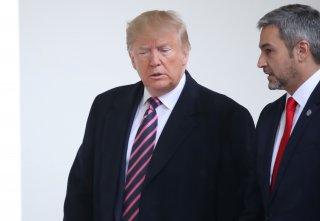 The coronavirus outbreak is still in its early stages of South America. Countries there have started taking more proactive measures to moderate the spread of the disease. And one of the continent’s smallest nations appears to be having the greatest success.

A landlocked country of only seven million people, Paraguay took early action to impede the epidemic. The government imposed a strict lockdown reinforced by aggressive social-distancing measures well before ahead of its neighboring countries. Paraguay shut its schools and suspended large events in early March. Shortly thereafter, it closed its borders and quarantined almost its entire population. The result: the fewest cases and deaths in the region, at least so far.

While it is still premature to gauge how Paraguay will come out of the current coronavirus pandemic, it went into the crisis riding high.

In recent years, Paraguay has implemented a series of significant political and economic reforms. This ongoing transformation has the nation plaudits from allies and potential investors alike. Last year, Secretary of State Mike Pompeo applauded the country’s transition to democracy as an inspiration to the entire region. It was the first time a U.S. Secretary of State had visited the country since 1965.

On the economic front, Paraguay has been delivering solid economic growth with low rates of inflation and unemployment. Over the past five years, its economy has grown at a rate higher than any of its neighbors, averaging more than 4 percent annually. Similarly, as the World Bank has noted, Paraguay’s overall reduction in poverty has been “larger than the regional average.” In 2017, the International Monetary Fund remarked upon Paraguay’s “enviable economic stability,” and international rating agencies also have upgraded the country’s sovereign risk ratings.

In more recent years, former President Horacio Cartes and current President Mario Abdo Benitez have focused on improving fiscal discipline. As a result, Paraguay’s level of public debt is among the lowest in the region. The country has also made strides in battling corruption and inefficiency in the public sector.

The sustained push for economic liberalization and greater transparency in government has markedly improved Paraguay’s competitive edge. At The Heritage Foundation, our 2020 Index of Economic Freedom rates Paraguay’s economy as “moderately free,” and its global ranking of eightieth puts it ahead of neighboring Argentina, Bolivia, and Brazil.

Paraguay is also playing a larger—and, from the standpoint of the United States, quite productive—role on the foreign policy front. For some time now, it has maintained constructive relationships with Israel and Taiwan, two important allies of the United States.

This makes a difference. Paraguay is one of just seventeen countries in the world—and so far the only nation in South America—to recognize Taiwan. And Asuncion followed Washington’s lead in Israel, moving its embassy there from Tel Aviv to Jerusalem in May 2018.

Paraguay backtracked later that year, moving its embassy back to Tel Aviv, straining relations between the two countries. But in 2019, Paraguay officially recognized the military wings of the Palestinian group Hamas and Lebanon’s Hezbollah as terrorist organizations—a development welcomed by both Israel and Washington should further cultivate and grow this unique nexus among these three willing partners of the United States—Israel, Paraguay, and Taiwan.

Paraguay has already shown itself to be a good partner for the United States in hemispheric relations. It has worked closely with Washington in counter-narcotics initiatives as well as cooperating to reduce other illicit cross-border activities.

At last December’s the White House summit meeting, President Donald Trump and Paraguay President Mario Abdo Benitez jointly reaffirmed their commitment to work through the Trade and Investment Framework Agreement “to promote investment in Paraguay and to increase bilateral trade” and continue to deepen “robust defense and security cooperation.”

All in all, Paraguay is fast becoming one of the most reliable partners of the United States. Once both countries overcome the coronavirus crisis, the revitalized relationship between the two nations should continue to grow.

Anthony B. Kim is the research manager for The Heritage Foundation’s Center for International Trade and Economics and the editor of the 2020 Index of Economic Freedom.