A Plan for Keeping the U.S. Air Force's Best Pilots in Service 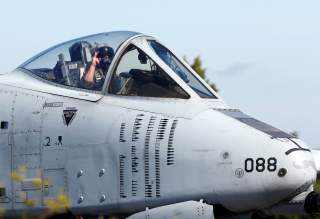 President Trump’s recent executive order authorizing the secretary of defense to recall up to a thousand retired Air Force pilots to fill that service’s ever-growing shortfall is certainly welcome. It may indeed help temporarily quell the current fighter-pilot manning crisis.

But it’s a Band-Aid, not a cure. The long-term repercussions of implementation are unlikely to thwart the downward spiral of pilot retention, or the readiness of the Air Force.

The fighter-pilot shortage has grown increasingly worrisome over the last several years. The Heritage Foundation’s 2018 Index of U.S. Military Strength rated the Air Force as “weak,” based in part on its current and forecast shortfall of fighter pilots. By year’s end, the service is projected to have fewer than 2,643 of the 3,643 active-duty fighter pilots it needs to execute its mission.

That problem is exacerbated by how long it takes to train competent pilots to replace those exiting the service. It takes two years for a pilot candidate to complete basic flight school and the fighter-training pipeline. But even then, those graduates aren’t ready for combat. Mission-qualification training at their gaining unit consumes another two to three months before new pilots are ready to follow someone else into combat as a wingman.

From there, it takes two years to become a flight lead, two more before they can upgrade to instructor and a total of seven years before an individual maximizes his potential as a fighter pilot.

Yes, bringing previously qualified fighter pilots back on active duty will help the Air Force recover all of that experience over the course of months, rather than years. The training required to requalify them would be minimal, as would be the cost, and enticing some of these “graybeards” to return will be relatively easy.

However, this solution introduces new problems that will exacerbate the current pilot-retention dilemma. In fact, it will help to mask several very real reasons pilots will continue leaving the service in the years ahead.

Many pilots who elect to separate or retire from the service do so to pursue more lucrative careers or a better quality of life. The average pilot flying with a major commercial airline earns more than $150,000 a year, but other even higher-paying professions are hungry for leaders with the experience and drive associated with the fighter community.

Financial gain and quality of life are reasons readily acknowledged by Air Force senior leaders. Rarely mentioned, however, are other factors that contribute to the decision to leave the service, such as falling performance standards, lack of flying time, and a lack of respect from the service for airmen’s values and beliefs.

Flight School graduation rates have skyrocketed from below 80 percent in the 1980s to the point where almost everyone entering flight school now graduates (even fighter candidates). Similarly, promotion rates to major have also inextricably grown from around 90 percent in 1997, to a recently announced rate of 100 percent for the next three to four years. Yet all this has occurred with no discernible improvement in the quality of candidates or instructors, or with the automation within the aircraft they fly.

Graduation or promotion rates of 100 percent either mean that no one performs so poorly that they fail to meet a service’s high standard, or that standards have been lowered to the point where even the poorest performers qualify for advancement. Either way, combining the two statistics means the Air Force now has a system with no discernible level of screening during the first sixteen years of a pilot’s career.

Lowering the flight training standards will likely only show itself in a near-peer combat environment. The drain on talent it can cause is easily masked by other issues, but the effects are no less real.

Highly competitive people thrive in teams with other high performers, where their performance is recognized and differentiated from that of less talented individuals. They tend to move away from organizations in which retention is the primary goal regardless of performance.

Fighter pilots have been averaging fewer than two sorties a week for the last five years, which can’t help but sap both their competency and the drive that brought them to a fighter cockpit. The leadership of the Air Force will counter that simulator time fills both gaps, but here they have lost sight of the big picture: that it fills neither.

Pay, standards for performance and time in the air are big issues that can easily mask the effect of social engineering on service members. These injects are not experiments, but moral mandates. Those who don’t accept the new coding must either hide their own beliefs or find themselves facing one of the few real disqualifiers for promotion.

Those willing to give up their trajectories in the civilian sector to (re)embrace those issues will have predictable qualities and dispositions. While many will be positive, it only takes one or two caustic personalities to cause someone on the cusp of staying to make the decision to leave.

But that’s not the only potential downside of this move. Bringing back these graybeards will also affect the quality of life for those pilots still on active duty.

Retirees lured to return to the active Air Force will likely only fly in stable, nondeploying roles such as basic flight school or fighter training units—assignments that fighter pilots once avoided due to their nonoperational mission. Unfortunately, those assignments are the only place where midgrade officers can find relief from the relentless operations tempo of today’s Air Force.

Removing those assignment opportunities from those currently serving will mean more time away from home for fighter pilots whose families already bear the brunt of their service’s demands. This will likely make retaining those pilots that much more challenging.

In 1991, the Air Force executed the unpopular policy known as “stop loss” to prevent the exodus of fighter pilots during Desert Shield and Desert Storm, and later offered generous bonuses for that era in an attempt to entice those eligible to exit the service not to do so. While successful in the 1990s, the same scheme of retaining pilots with even bigger bonuses will leave the service a thousand active-duty fighter pilots short by year’s end.

The chief of staff of the Air Force has stated that he is not considering stop loss to stem the current crisis. But the service has to do something to fill the 28 percent fighter-pilot manning shortfall. Even with its adverse long-term effects, this novel move to recall retirees, coupled with more generous bonus payments, may temporarily shore up the numbers. But its timing is late, and the Air Force’s overall strategy once again lacks reason.

Legend has it that early twentieth-century insane asylums tested inmates’ ability to reason by placing them a room with water gushing from a faucet onto a concrete floor. They gave the patient a mop and a bucket and told him to mop. If he went for the faucet before attacking the floor with the mop, they paroled him. If not, they knew he was still crazy.

The Air Force has addressed every pilot manning shortfall in recent history by going right for the mop. While the depth of this fighter-pilot shortage certainly demands that the leadership address the crisis on the floor, it also needs to address the spigot and every inch of space between it and the flat surface below.

The service has initiated a second move to target at least part of that flow: the influx of pilots. Air Education and Training Command has announced plans to increase pilot production from one thousand to 1,200 pilots per year. While this 20 percent increase is a step in the right direction, actualizing this initiative will likely take several years, and require another pilot-training base, due to capacity limitations within the current training structure.

However, tweaks in student scheduling can accelerate the pace that classes move through flight school and reduce pilot training from a year-long endeavor to one approaching nine months—and that move can be made quickly and at virtually no cost.

That said, a 20 percent increase is nowhere near enough. If the Air Force holds to a 100 percent graduation rate, a 20 percent increase will deliver an additional two hundred pilots a year, but the quality of those graduates will always be questioned. And the mindsets that come with no screening at any level will do little to make the best want to stay.

The Air Force should incrementally increase pilot production to 1,400 pilots a year—a level that will allow screening at all levels. Screening won’t just bring a sense of pride back to the fighter force, it will deliver pilots more prone to quickly absorb, master and execute new tactics; pilots that can successfully fulfill tasks in dynamic and challenging environments, like flying in the low-altitude structure.