Plight of the Uyghurs: Why Muslims Won't Speak Up for Their Brethren 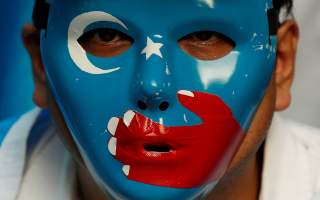 Western media has extensively reported about the draconian forced assimilation program that Beijing is imposing on eleven million Uyghurs in Xinjiang. This program includes wiping out any traces of the Islamic beliefs and behavior of this historically Muslim Turkic ethnic group. Given that Islam requires every Muslim to defend his brethren right to practice Islam, it is expected from Islamic countries to be very vocal about this massive injustice. With a whopping 1.8 billion Muslims and fifty Muslim-majority countries, the Islamic world could exert significant diplomatic and economic pressure on China to stop forcefully assimilating Uyghurs.

The Islamic world has responded to the plight of the Uyghurs with deafening silence. That silence has not gone unnoticed by many western news organizations, which exposes the inconsistency between it and the unquestionable obligation that the Muslim world has to defend the Uyghurs. Headlines such as “Muslim countries’ silence on China’s repression of Uighurs,” “Islamic Leaders Have Nothing to Say About China’s Internment Camps for Muslims,” and “The Muslim World Remains Largely Mute on Uyghurs’ Plight” are just some discussing this issue. And when the Muslim world decides to express its opinion, it gets even worse. Most Arab states “give China a pass on Uyghur crackdown” and the de facto leader of most of the Muslim world, Saudi Arabia, defends Beijing’s brutal assimilation program by arguing that China has the “right to put Uighur Muslims in concentration camps.”

If there is no question that Muslims should defend their brethren and that they have the means to do so, then why is the Islamic world silent about the Uyghur plight? The answer is that the overwhelming majority of Muslims are “cultural Muslims” rather than true believers in Islam. The term “cultural Muslim” refers to a person who adopts a number of Islamic traditions in his life but lacks ‘Iman’ (belief), Islam’s fundamental value. While no one can assess the degree of belief held in another person’s heart, one can, however, compare the person’s actions to what is expected of him in Islam. I will use two cases to explore the distinction between a Muslim believer and a cultural Muslim: the lack of sufficient Arabic language knowledge (for the case of non-Arab Muslims) and the distinction between being born and becoming a Muslim, a necessary process to be a believer.

What are the implications of over 70 percent of Muslims not speaking Arabic? Muslims are expected to believe that Allah created them and everything around them, that He is the only true source for guidance in this life and that nothing in our lives is possible without His consent and grace. They also believe that to guide humans, Allah sent the Qur’an, which is the only infallible guide for humans until the Day of Judgment. In Qur’an, Muslims can find guidance to successfully overcome all kinds of challenges—personal, social, economic, religious, and so on.

This unique and precious source of guidance and success is, however, written in the Arabic language and cannot be translated because it contains the words of Allah. Islamic scholars can make their own interpretation of the meanings of Qur’an and share them in other languages. These personal interpretations can be used by others as one of the sources of advice but not as guidance. This is because each person will interpret the Qur’an in a different way resulting in thousands—if not millions—of interpretations of Qur’an. As a consequence, Muslims are not allowed to seek guidance from anyone besides Allah and His Messenger. To reinforce this fundamental point, there is a well-known and true hadith narrated by Mu’aawiyah ibn Abi Sufyaan, in which Prophet Muhammad (PbuH) warns Muslims not to make fundamental changes to Islam and not to blindly follow Islamic leaders:

In summary, Qur’an is the only valid source of guidance from Allah and cannot be translated from Arabic. Hence, if Muslims want to find out how to be successful in this life and in the hereafter, they must learn Arabic if they do not have any impediment to do so. There is no alternative to this.

It is deeply inconsistent to declare that one­­­­­ believes in Allah and Qur’an, but then does not make the minimal effort to learn the language that is the key to access Allah’s guidance. This same person finds the time and energy to learn all kinds of other languages, skills, and worldly knowledge that have only very limited value in the material life. More surprisingly, this person who might “read” and “recite” Qur’an multiple times during his daily prayers, does not seem to be bothered by the fact that he does not understand the meaning and value of the precious words he is uttering. Knowing that the person has no impediment whatsoever to learn Arabic, wouldn’t you be surprised by the fact he is not learning it? And when an entire community follows this pattern of not learning Arabic, wouldn’t you question the degree of belief found in the entire community?

Now, let’s explore the difference between being born a Muslim and becoming one. When asked why they consider themselves Muslims, the large majority of Muslims reply that it is because they were born into a Muslim family. Well, being born a Muslim does not imply that one is a Muslim. All humans, animals, vegetation, planets and so on are born Muslim. Hence, being born a Muslim does not make a person a Muslim believer. Everyone who wants to be a Muslim must take the initiative and go through the struggle of becoming a Muslim first. That is, to learn and to question everything, to think and think again, slowly digesting what Islam means and what it implies to be a Muslim. This cannot be achieved by birth. This is a life-long struggle full of ups and downs, successes and failures. And what is the source of the knowledge that needs to be “digested” to become a Muslim? Qur’an, the original Qur’an in Arabic, not the interpretations of scholars.

The fact that 75 percent of Muslims do not speak Arabic and maybe over 90 percent of them have not been through the necessary process of becoming Muslims strongly undermines their claim that they are believers in Allah and His Book. Ultimately, it is up to the 1.8 billion Muslims in the world to do some soul-searching and honestly decide if they are “living” Islam as believers should or “wearing” Islam as cultural Muslims do. Meanwhile, the Islamic world will remain deafening silent about the harrowing plight of over ten million of their brethren whose Islamic belief and actions are being forcefully wiped out.

Patrik K. Meyer holds a PhD in Politics and International Studies from the University of Cambridge and is a visiting professor at Universitas Muhammadiyah Yogyakarta, Indonesia.