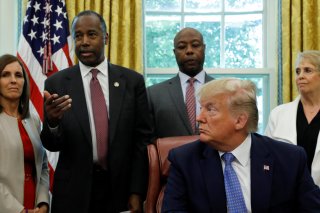 The Department of Housing and Urban Development (HUD) is making a very big mistake. It’s trying to modify an onerous Obama-era regulation that would take over local zoning instead of just getting rid of the regulation in its entirety. But it is not too late for HUD to reverse course, and President Donald Trump should ensure that it does.

The effort to reverse this HUD regulation demonstrates that Trump’s true legacy may not depend so much on the high-profile battles that seize the spotlight. No, his long-term impact may very well be measured by his success in ridding us of burdensome federal rules, regulations, and bureaucratic overreach that intrude into our daily lives, stunt the growth of our economy, limit entrepreneurship, and encroach on the power of state and local governments.

Reducing the power of the federal behemoth will also help reverse some of the cultural gains the Left has made in the past fifty years.

Emblematic of the federal government’s intrusion into local affairs is the current effort by HUD to weaken the requirements of the Affirmatively Furthering Fair Housing (AFFH) regulation. This rule empowered the federal government to take over local zoning decisions and compel jurisdictions that receive HUD housing funds to match the demographic make-up of nearby cities.

AFFH was released just as the Obama administration was ending and was intended to densify suburbs, force mass transit into areas that don’t want it, and get rid of single-family housing, the hallmark of middle-class America—something progressive, liberal urban planners hate.

Unfortunately, the Trump administration has chosen to roll back only some of the worst aspects of the 2015 mandate, rather than eliminate the program altogether. HUD, led by Ben Carson, should reconsider. Timidity will not help the president drain the federal swamp that threatens to engulf local towns and suburbs all over the country and turn HUD into the national zoning authority.

AFFH is bad. As Sen. Mike Lee (R-Utah) wrote when Obama first issued it, “this new regulation is designed to give unelected, anonymous bureaucrats in Washington the power to pick and choose who your new next-door neighbor will be. If they don’t believe your neighborhood is ‘diverse’ enough, they will seize control of local zoning decisions—choosing what should be built, where, and who should pay for it—in order to make your neighborhood look more like they want it to.”

Stanley Kurtz of the Ethics and Public Policy Center correctly summarized AFFH. It gives the federal government “a lever to re-engineer nearly every American neighborhood—imposing a preferred racial and ethnic composition, densifying housing, transportation, and business development in suburb and city alike, and weakening or casting aside the authority of local governments over core responsibilities, from zoning to transportation to education.”

AFFH’s reach is so widespread because so many communities have become far too dependent on such HUD programs as Community Development Block Grants. If a local town or city wants federal housing funding, then it would have to comply with AFFH. The mandate’s egregiousness was magnified by its use of the dubious legal theory known as “disparate impact.”

This doctrine is used to tar policies and general practices that are entirely and wholly race-neutral as discriminatory, even if there is no proof of any discriminatory intent whatsoever. If said policies somehow have a disproportionate impact on categories of Americans deemed protected by the federal government, they are defined as discriminatory and thus illegal.

Some 377 pages long, AFFH rightly came into the sights of Ben Carson’s HUD soon after the change in administrations. In 2018, Carson’s HUD announced the withdrawal of the 2015 mandate’s so-called “Local Government Assessment Tools,” in which communities had to report non-housing related information. This would then be used by HUD to judge the efforts to “diversify” their communities. If federal bureaucrats believed a community was not sufficiently “diversified,” the local jurisdiction would not get federal funds that are intended to provide affordable housing.

Under the revised, proposed rule recently released, HUD concluded that the prior Obama assessment tools “required significant resources from program participants, and its complexity and demands resulted in a high failure rate for jurisdictions.”

They required local officials to answer ninety-two questions on such topics as “significant disparities in access to opportunities, and disproportionate housing needs.” The local officials also had to analyze and report data on such issues as “access to public transportation, quality schools and jobs . . . [and] environmental health hazards,” topics far afield from the issue of whether there is affordable housing in a particular community.

The new rule says that its goal is to provide “access to housing” and “improved housing conditions,” as opposed to racial diversity. But it still lists a long series of factors that HUD considers “inherent barriers to fair housing choice” that clearly go far outside the issue of affordable housing and interfere with local decisions on zoning and community development.

That includes things like “unduly rigorous design standards” for housing; “unduly prescriptive or burdensome building and rehabilitation codes;” “arbitrary or excessive energy and water efficiency standards;” “source of income restrictions on rental housing;” ”time-consuming construction or rehabilitation permitting and review procedures;” and “administrative procedures which have the effect of . . . impeding the approval of affordable housing development;” etc.

In other words, a local community may be denied federal housing funds if it believes it is in the best interests of its residents to have high-quality housing that is both energy and water-efficient. Or if it thinks landlords should have the ability to make their own decisions on the creditworthiness and ability of tenants to pay their rent. Or if a town wants to carefully review and approve the work of contractors to protect its residents. So, just like the Obama rule, the new proposed rule will once again force local communities that want HUD money to change their zoning rules and administrative procedures.

What is particularly irksome about this regulation is that it appears to violate federal law. 42 U.S.C. §12711—“Protection of State and local authority”—specifically bars HUD from conditioning federal housing assistance on the type of conditions outlined in the new rule that interferes with a state or local “public policy, regulation, or law.”

The purpose of the federal money appropriated by Congress for HUD is to provide local communities with the funds necessary to build housing that Americans at the lower end of the socioeconomic level can afford. The only rule that HUD should have in place to decide what jurisdiction will receive these grants is whether they will be used to increase the supply of affordable housing. End of story.

It is by overturning such monstrosities as AFFH and the disparate impact standard that the Trump administration will make its mark in history. Secretary Carson and other members of the administration should bear this in mind.