Poland and America: Together Forever? 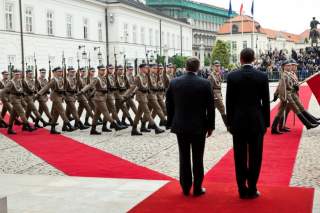 The illegally obtained transcripts detailing the undiplomatic remarks of Poland’s chief diplomat, Foreign Minister Radoslaw Sikorski, have cast an intriguing light on the place that America occupies in Poland’s imagination. They also raise important questions about the future of NATO. The conversation occurred at a Warsaw restaurant in January—that is, before the big descent in U.S.-Russian relations brought about by Ukraine’s February 22 revolution and Russia’s annexation of Crimea. Sikorski was chatting with Jacek Rostowski, a member of the ruling Civic Platform party who left his post as finance minister in 2013.

The alliance with Washington, held Sikorski, is “bulls***.” It “isn’t worth anything. It is downright harmful because it creates a false sense of security. . . . We'll get into a conflict with the Germans and the Russians and we'll think that everything is super because we gave the Americans a *******.” “The problem in Poland is that we have shallow pride and low self-esteem." In describing Poland’s attitude toward the United States, Sikorski used the Polish word "murzynskosc"—a derivative of "murzyn" (reports The Guardian) that “denotes a dark-skinned person and someone who does the work for somebody else.”

After the excerpts from the transcript were released, Sikorski said that his words had been taken out of context and that he was “caricaturing” the Polish opposition’s attitude toward the United States, not expressing his own view. Poland’s Ambassador to the United States also weighed in, calling Sikorski’s comments “distorted” and complaining of an essay in TNI by Doug Bandow. Ambassador Schnepf also reminded us—a very important point—that “the quoted words were from many months ago during a specific moment of uncertainty as to the stance of our allies towards the Ukrainian crisis.” A lot has happened since then, but not nearly enough to ease Poland’s anxiety.

Sikorski’s fulminations raise two basic questions about the Polish-American alliance: First, what has the United States forced Poland to do that should make it feel humiliated? Second, wherein lay the betrayal? Why did Sikorski think in January that the U.S. guarantee was worthless?

Neither question is easy to fully answer. There is, to be sure, plenty of evidence that Poland has in fact been quite compliant to the United States for more than twenty years. Poland did the United States’ bidding by contributing forces to the wars in Iraq and Afghanistan, commitments that were unpopular at home. (Poland’s peak contribution in Iraq was 2500 soldiers; the full Polish contingent was withdrawn in October 2008). As the chief U.S. ally in Eastern Europe, more generally, it has felt an especially strong obligation to be loyal to U.S. wishes. But that complaisance obviously rankles. What Poland is forced to say in public in deference to the United States is not what it feels in private.

This sort of complaisance is actually a hidden cost of the cult of American leadership and its dogmas of unity under Washington’s benign hand: the weak states, though justly proud of their independence, are in no position to say what they really think. That is a loss.

And what of the betrayal? In the classic trade-off justifying monarchical rule, obedience was given in exchange for protection. (It was only after King George had thrown the American colonists “out of his protection” that they threw off their obedience in 1776; such was the immediate justification of the decision to declare independence.) With the United States supplying some 70 percent of NATO expenditures, the language of protection and obedience is a better overall fit for NATO than the official depiction of an alliance of equals not directed against anybody. It is especially true for the newer members. Poland, in Sikorski’s reckoning, had done the distasteful thing expected of it, burying its heart on bended knee, but all for nothing.

Sikorski probably didn’t believe in January that the American guarantee was “worthless”—we all have a tendency to exaggerate when hot—but his remarks attest to a profound anxiety that the Poles find difficult to keep down. In 2006, Sikorski likened Germany’s Nord Stream gas deal with Russia as a revival of the Ribbentrop-Molotov pact of 1939. In 2008, he allegedly accused Germany (in a conversation with U.S. official Paula Dobriansky released by Wikileaks) of being a “Trojan horse in NATO” after Germany blocked a NATO “membership action plan” for Ukraine and Georgia.

In 2009, Polish opinion was irked by the Obama administration’s decision to cancel plans for missile defense installations on Polish soil. In the American reckoning, of course, the NATO missile shield was directed against Iran, not Russia, but just about everybody else, including Russia and Poland, saw it as an anti-Russian system. In the aftermath of the annexation of Crimea, American politicians urged that it be deployed to Poland as punishment for the Russians. Question: how could it reassure the Poles if it wasn’t even directed against the Russians? Answer: the public rationale linking it to Iran was not exactly the truth of the matter.

Poland’s mood soured further after 2009. It was unnerved by the Obama administration’s much heralded “pivot” to Asia, and seriously ticked off by an Obama gaffe about “a Polish death camp.” Poland, who had modernized its air force with the purchase of forty-eight U.S. F-16s, was considering looking elsewhere than America when it replaced its aging SU-22 bombers.

Sikorski’s lamentations of betrayal were expressed in January 2014. Since that time, a revolution has occurred both in Ukraine and in Russia’s relations with the West. Among the tumbling dominoes set into motion by the February Revolution are the Russian annexation of the Crimea, the outbreak of civil war in Ukraine’s east, the further prostration of the Ukrainian economy, the probable collapse of Europe’s post–Cold War arms-control regime, and a new president—Petro Poroshenko—who could just as easily have been elected in December as in May. Extreme right forces that could never win a national poll—and in fact did poorly in the May elections—were suddenly handed portfolios closely identified with the coercive functions of the state.

It has been endlessly repeated by western cheerleaders for the February Revolution that the poor showing of the far right in the presidential poll shows that the far right lacks any influence; in fact, it shows that the extreme nationalists never could have gotten in a legitimate election the portfolios they did get after supplying the muscle for Maidan.

Sikorski’s wife, Anne Applebaum, wrote a column in January (about the time of Sikorski’s secretly recorded conversations) in which she emphasized the historic responsibility falling on the Ukrainians. The “real test of any protest movement in any democracy” was whether its members could “find a way to join the system in order to change the system.” Ultimately, she argued, “a street movement’s success isn’t determined by the crowds it can mobilize, the clever slogans its members chant or even the government ministers it persuades to resign. Success is creating a real political alternative—and then getting that alternative elected to power.”

By removing Yanukovych through armed revolt, the Maidan and its sponsors in the West flunked this test badly. Then they had the gall to award themselves an “A” for what was both a violation of Ukraine’s constitution and an offense against international law.

The February Revolution was a forcible transfer of the organs of state power, especially the military and the police power, by the pressure of an armed mob, who rejected the February 21 agreement with Yanukovych (which Sikorski signed along with the German and French foreign ministers) that called for a constitutionally weaker president and new elections in December. The fabricated Western narrative, to which Sikorski has contributed, is that the February 21 agreement was abandoned because Yanukovych abdicated, when in fact he fled under the impetus of an armed ultimatum. Yanukovych's impeachment in the Rada also serially violated the procedures for removal contained in Article 111 of Ukraine’s constitution.

These would be grievous violations in any constitutional state, but were especially incendiary in one whose people had multiple identities, incompatible histories and clashing regional interests. At no point in the winter, however, did Foreign Minister Sikorski or Assistant Secretary Victoria Nuland tell the demonstrators on the Maidan to go home and work for victory in the elections, through the only means allowable in constitutional democracies. The failure of the democracy promotion crowd to condemn these undemocratic tactics is a scandal.

Sikorski’s January comments suggested that Poland had been part of a coalition of the unwilling, bending to Washington’s dictates against its better judgment. Especially since February 2014, however, it is the Poles who seem to have led the United States, not the other way around. (That is true of Germany’s relationship to Poland as well; German FM Steinmeier is keen to avoid any row with Poland over Ukraine.) As if they’d won the Daily Double, the Poles have also been showered with protestations of undying commitment from the United States ever since the Ukraine crisis broke.

“Our commitment to Poland’s security, as well as the security of our allies in Central and Eastern Europe, is a cornerstone of our own security, and it is sacrosanct,” Obama said in Warsaw in early June. “As friends and as allies, we stand united, together and forever.” Noting that, “throughout history, the Polish people were abandoned by friends when [they] needed them most.” Obama came to Warsaw “to reaffirm [the United States’] unwavering commitment to Poland’s security:”