Poland, Not Brexit, Is the Real Threat to Europe's Unity 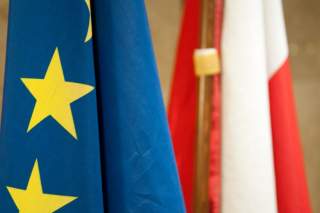 What a difference a year makes. At this time in 2015, Poland enjoyed more influence in Europe than at any point in its history. After reforming and growing its economy in the years following its admission to the EU, Poland—the union’s sixth most populous member with its eighth-largest economy—earned a seat at Europe’s head table from which it had long been excluded by partition, war and great-power struggle. Then in 2014, in a highly symbolic gesture, the union’s leaders elevated Poland’s prime minister, Donald Tusk, to the presidency of the European Council. Now an island of political and economic stability, Poland’s voice and opinion became sought after in a way they had never been before.

Fast forward to summer 2016. Poland’s de facto leader, Jaroslaw Kaczynski, is back in power. Poland is now sidelined in the EU, subject to its rule-of-law mechanism following the ruling party’s assault on the Constitutional Tribunal. Polish leaders have soured relations with their hugely important neighbor, Germany, by railing against perceived German bullying of Polish interests. Poland’s reputation as a reliable European partner is tarnished after its leaders refused to cooperate on migration and climate change. Even President Obama, speaking at a press conference alongside Poland’s President Andrzej Duda during the recent NATO summit, called on Poland not to erode its democratic achievements. Once hailed as a success story of European expansion, the success and vitality of Poland’s democracy are being called into serious question for the first time since its emergence from the Cold War.

Today EU watchers’ attention is focused on the fallout of the UK’s decision to leave the EU, so Polish democratic backsliding has fallen off the radar. Despite suggestions that Brexit could threaten the European project’s future, as Angela Merkel related, “the EU is strong enough to withstand Britain’s withdrawal . . . it will be maintained with or without the UK.” The original bedrock of the European project was, after all, Franco-German unity. It later grew to include other countries and a broader mission of, among other things, bolstering the rule of law. The UK was always an unenthusiastic participant in that wider project, so the past few weeks’ market gyrations notwithstanding, the EU will continue without it.

But the EU is far less likely to survive the degradation of its norms by member states that were admitted a decade ago at great risk and expense for the union. The EU’s success depends not only on open trade and free movement, but on a common conviction that Europe cannot be divided along the lines of rule of law. Many observers fear that the UK’s departure from the union will inspire nativist parties in other countries to seek their own independence referenda. While this is a risk, the financial and political chaos surrounding the mechanics of Brexit—together with what could be a final agreement granting the UK access to the common market only in exchange for open borders and payments to the EU, à la Norway—will probably dissuade some imitators from following suit.

Poland, on the other hand, offers Euroskeptics a more attractive path forward. If the EU fails to address Poland’s democratic backsliding as it failed to deal with Viktor Orban’s Hungary, Euroskeptic parties may attempt to achieve some of their goals by denigrating EU norms while extracting only the benefits of EU membership. Hungary, with fewer than ten million people, was a fairly small case. But Poland is much larger, with nearly forty million people, and could become a model for Euroskeptics emboldened by Brussels’s inability or unwillingness to enforce rule-of-law norms. If that happens, the purpose and character of the EU will be eroded far more severely than by Brexit.

The United States has few tangible national-security interests directly at stake with Poland’s democratic backsliding, and perhaps little interest, given the many other issues it faces around the world. But the United States has long been invested in the success of Europe’s integration, and the new Polish government’s eagerness to enhance Poland’s relationship with Washington gives it considerable leverage. President Obama’s decision to criticize Poland’s democratic backsliding at the NATO summit was a prudent action, and should be coupled with ongoing diplomatic pressure from the United States to correct a tragically misdirected course.

Adam Twardowski is a researcher in the Strategy and Statecraft Program at the Center for a New American Security (CNAS).

Image: Flags of Poland and the EU. Wikimedia Commons/Michal Osmenda