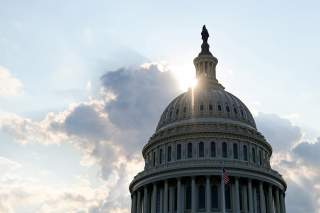 Frank J. DiStefano, The Next Realignment: Why America’s Parties Are Crumbling, And What Happens Next (Buffalo, New York: Prometheus Books, 2019), 469 pages, $25.99.

Some writers have discerned cycles in the rise and fall of American party systems. Others have observed patterns in American economic revolutions. Still, others have traced trends in American religious activism and its social effects. And a few have made the colonial “cultural hearths” the centerpiece of their analysis and examined their development throughout American history.

Frank J. DiStefano’s great accomplishment in The Next Realignment is synthetic—he integrates the political tendencies of American regional cultures into the cyclical patterns of “Great Awakenings,” economic revolutions, and party system realignments from the Federalist Era to the post–Cold War years; to my knowledge he is the first author who has done this explicitly. The result is a unified theory of American political history, a reasonable understanding of the relationships between our political thought, political practice, economic reality and cultural development.

The first section of the book introduces DiStefano’s theory of political realignments through a narration of American politics throughout America’s first five party systems—the Federalists and the Jeffersonian Republicans, the Whigs and the Jacksonian Democrats, the Post–Civil War Lincoln Republicans and southern Bourbon Democrats, the progressive Republican Party of Theodore Roosevelt and the populist-progressive Democratic Party of William Jennings Bryan, and finally the New Deal Democrats and the anti-New Deal, eventually conservative, Republicans. His assessments of the contributions of Henry Clay, William Jennings Bryan, Franklin D. Roosevelt, and William F. Buckley are particularly useful illustrations of times long gone.

According to DiStefano, an American party system sputters along well past its usefulness, until new realities render its old systems unsustainable. In relatively quick fashion, the old party structures and political alliances break down, and in relatively quick fashion, new political alliances in reformed party structures rise up to take their place. These new structures provide the framework for great political debates in an era marked by new economic and cultural realities, until breaking down themselves and being replaced in a perennial cycle of rebirth. Sometimes these cycles can be chaotic and even violent, as happened in the 1850s and 1860s when the Whigs collapsed. Other times they can be immensely productive and bloodless, as happened in 1896 and 1932.

DiStefano deserves special praise for his takedown, early on, of “Coming _____ Majority” prophets on the one hand, and starry-eyed third-party promoters on the other. “America,” he says, “is a two-party republic. America will always have two major parties that divide us for decades into two great coalitions in a great national debate.” He gives the logic more crisply than most: if you want to have a real influence in American government, you need to hold a majority. America being as politically, geographically, socially, and economically diverse as it is, with no fewer than five or more significant ideological blocs at any given time, you inevitably need to get into a coalition with people whose interests are parallel, rather than identical, to yours. If you can get that coalition over 50 percent, you have a majority in Congress, the statehouses, or the electoral vote, and can coordinate policy nationally. The higher over 50 percent you go—the more dominant your coalition becomes, the more interest groups you add—the less concessions any individual interest group in your coalition gets, and thus the more inclined they might be to defect at their own convenience.

So there’s an incentive, having nothing to do with particular constitutional mechanics and everything to do with the very nature of our government, for a relatively polarized two-party system. “The problem isn’t single-member voting districts. The problem is the principle of majority rule on which the modern republic is based.”

The second section of the book examines four political principles which, in DiStefano’s view, encapsulate the American experience in political ideology. These are “Liberty,” in a non-domination, minority rights, self-government sense; “Progressivism,” as a spirit of communal moral improvement through systematically rational design; “Virtue,” as a spirit of communal moral preservation through adherence to custom and moral norms; and “Populism,” as the impulse toward leveling, redemptive self-government through popular uprising.

By finding Liberty, Progressivism, Virtue, and Populism expressed by different groups at different times, from the early Republic to the present day, DiStefano renders his readers two crucial services. First, he opens portals across time, and makes it possible for someone in our own day to see themselves in the past, and to see the political spirit of someone long dead among us today. A contemporary small-government libertarian, progressive liberal, communitarian conservative, or democratic socialist—not to mention all the permutations besides—can find heroes to cheer, and thus bind themselves to some degree to the American heritage.

The third section of the book examines Great Awakenings and economic revolutions in the context of the Fifth Party System. America’s public life “rocks back and forth like a pendulum between pragmatic eras and moralistic ones.” Sometimes—in the early Republic, in the Gilded Age, in the Interwar and early Cold War—Americans are known for their intense pragmatism, their lust to conquer nature, their baldly cynical acquisitiveness. Other times—in the First Great Awakening, in the Antebellum’s throes of democracy, in the hubbub of the Populist and Progressive Eras—Americans are known for their messianism, their utopian romantic passions, their desire to reorder themselves and all the world around a moral conception of life. This, in turn, affects the tenor of their politics.

Conversely, DiStefano doesn’t pay nearly as much attention to economic revolutions as he could—for a more complete assessment of how technological and economic change shapes American politics, Michael Lind’s Land of Promise remains the go-to work. But DiStefano does examine in some detail the economic and social policy priorities of Presidents Lyndon Johnson and Richard Nixon, and in so doing notes that even in the 1960s, debates over the New Deal were already getting old as new questions of race relations and cultural politics were coming to the foreground.

In some ways, though, DiStefano’s assessment of the Fifth Party System seems to break from his analysis in the rest of the book. He holds it as a matter of faith that in 2019, America remains stuck in the Fifth Party System inaugurated between 1932 and 1936.  To the extent that contemporary Republicans have been nominally “small-government” and that contemporary Democrats have been nominally “big-government,” this is true enough. But other changes in American political life suggest, instead, that a realignment took place in the 1960s, that we have inhabited a Sixth Party System since then, and that we now are approaching or have already entered the decay of that Sixth Party System.

Between 1968 and 1976, the Republican and Democratic Parties changed dramatically; the New Class and New Left became the driving forces among Democrats, while the Conservative movement became the driving force among Republicans. The New Deal-Great Society Democratic establishment would never rise again after Chicago 1968, and the old Eisenhower-Rockefeller Republicans sank with Watergate and Ford’s defeat.

Ronald Reagan vs. Walter Mondale in 1984 was as different from Dwight Eisenhower vs. Adlai Stevenson in 1956, as William McKinley vs. William Jennings Bryan in 1900 was from Rutherford B. Hayes vs. Samuel Tilden in 1876. DiStefano recognizes a realignment in 1896, but not in 1968; this is the crucial flaw in his application of his thesis.

Nonetheless, DiStefano’s mistaken view of essential continuity between 1932 and 2019 could imply something else. It could be that the realignments he sees are more like reformations than revolutions—moments in time where, yes, the political calculus is scrambled and the coalitions and institutions shift, but there is a reasonably smooth transition from one epoch to the next, with the same players adapting, and seeing themselves as being consistent.

Most unfortunately, this otherwise path-breaking book ends with a dud. In speculating about the future, DiStefano bemoans a future party system where one coalition, based in “rural areas, small towns, industrial areas, urban cores, and the South,” which was “socioeconomically the party of the poor and working class,” opposed a party whose base “would be on the coasts, the West, and North,” whose socioeconomic constituency would be “business, professionals, white-collar America, the upper half of the middle class, and the ‘meritocracy.’”

These political coalitions—while indeed opening room for vitriolic regionalism and class conflict—would be more natural messengers for their constituents’ diverse concerns in this polarizing, globalizing, technology-saturated age. So long as a responsible politics of cross-cutting coalitions was practiced—for example, so long as the interior party maintained some outposts on the coasts, and so long as the coastal party maintained outposts in the interior, and both competed in various peripheries—truly national coalitions could probably shift back and forth. This looks more or less like the way things are going these days, with blue-state Republicans like Kevin Faulconer and Charlie Baker, and red-state Democrats like Joe Manchin and Pete Buttigieg, possibly foreshadowing the future fault-lines and compromise channels of American politics.