Political Poison: How the Coronavirus Pandemic Could Poison the U.S.-China Relationship 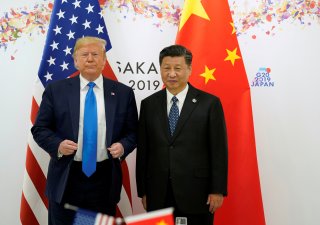 Over the past two months, rhetoric on China has become noticeably more strident in the United States. Terms like “China virus,” “soft on China,” “weak on China,” and “rolled over on China” saturate the political discourse. Some pundits consider this moment xenophobic, others seem to welcome it, and still, others say it’s a phase, soon to pass.

History, on the other hand, tells us it’s dangerous.

The combination of two things make it so: the public trauma caused by the coronavirus pandemic and the bipartisan effort by political leaders to use anti-China rhetoric for the sake of short-term political gains. As history demonstrates, trauma and strident scapegoating of foreign enemies often lead to devastating long-term consequences for U.S. foreign policy. By creating, above all else, dominant national narratives that demonize international competitors, the United States tends to miss important opportunities for cooperation with foes and sometimes finds itself embarking on costly crusades abroad that are of little value to national security. Without a course correction, this could be where the United States is headed in its policy toward China.

U.S. politics during the Cold War offer the best lens for understanding this. In early 1946, public revelations of espionage by the Soviet Union in North America coupled with a series of aggressive Soviet moves in Iran and Manchuria hit the U.S. public like a bombshell, leaving U.S. citizens in “near hysteria” over the policy direction of their World War II ally.

With midterm elections on the horizon, Republicans saw this public trauma as a political opportunity. They painted the Soviets as an expansionist menace and criticized President Harry Truman for aiding “red fascism.” Worried about being labeled “an appeaser,” Truman instructed Secretary of State James Byrnes to give a tough anti-communist speech of his own to shore up the administration’s public image.

Given its public appeal, this initial postwar foray into anti-communist rhetoric quickly cascaded in the months to follow. Republicans used it to gain control of the U.S. House and Senate for the first time since 1932, while Truman launched a highly publicized initiative to root out communists in government, and, most importantly, took a strong anti-communist line in the 1947 Truman Doctrine speech to win public support for U.S. aid to Greece and Turkey.

These moves for short-term gains (administration officials admitted, for instance, that Truman launched the loyalty program solely because of “political pressures” that could impact Truman’s “run in ‘48”) had critical long-term consequences. As tension with the Soviets mounted in the late 1940s, anti-communism became locked into the conscience and discourse of the U.S. public⁠— a “rigid political absolute” that was “totally centrist and politically safe,” according to historians.

Across the Cold War, this robust anticommunism narrative contributed to two dangerous sets of policy consequences for the United States. First, it domestically delegitimized working with communist states in ways that prevented U.S. leaders from reaching otherwise useful cooperative agreements with strategic rivals. Truman experienced this. In addition to telling Byrnes to give a tough speech in 1946, he also instructed his secretary of state to “stiffen up and try for the next three months not to make any compromises” with the Soviets. The politics around the strengthening anticommunism narrative quickly made this pause in cooperation standard U.S. policy and plunged the United States into dangerous hostility not only with the Soviet Union but communist China as well.

Second, politicians across the Cold War repeatedly jousted with one another (especially during elections) to gain the mantle of anticommunism in ways that frequently trapped them down the line into aggressive and costly policies.

Again, Truman faced this. He saw no U.S. strategic interests in Korea, especially in crossing the 38th parallel to unite the peninsula but entered the war anyway to keep pace with the pressures of the anti-communist narrative at home. Likewise, during the 1960 election, John Kennedy took an especially tough line on Cuba to outbid Richard Nixon for public support on anticommunism⁠—a move he later regretted. After winning the presidency, Kennedy was pushed away from his preferred policy of normalizing relations with Castro toward aggression instead because it played better politically in light of his campaign rhetoric. The hapless Bay of Pigs invasion followed, which contributed directly to tensions that nearly produced a nuclear war in the Cuban Missile Crisis the next year.

Today, the United States faces a “1946 moment” with China. With around ninety thousand deaths, the dislocations of social distancing, economic collapse and historic levels of unemployment, the coronavirus pandemic has traumatized the United States in ways potentially far more pronounced than Soviet actions in 1946. The Chinese origins of the virus and, especially, steps by the Chinese government (underreporting deaths, bizarre charges of U.S. responsibility, and efforts to enhance China’s international standing) on top of preexisting animosity in the United States toward China have fueled the trauma all the more, deepening U.S. public suspicions and fears.

Similar to 1946, as well, the heated new anti-China rhetoric is being pushed by partisans on both sides looking to take advantage of the coronavirus trauma for the November elections. As such, the opportunity for short-term political gain is eclipsing any consideration of long-term policy implications.

Following the strategy of the Trump White House, a recent GOP document instructed Republicans on the campaign trail this year to shift blame to China for “covering it [the virus] up” and the Democrats for being “soft on China.” Democrats are hitting back in kind. Determined to show more foreign policy toughness in this election cycle, a recent campaign document indicates that anti-China attacks against Trump are a big part of former Vice President Joe Biden’s strategy to win in November. Reflecting this, Biden campaign ads blame Trump for “not being tough on China” and putting too much trust in Chinese premier Xi Jinping.

Overall, this bipartisan rhetoric is painting China in dark, existential terms. If Xi turns more aggressive at home and abroad as expected in the coming months, the current discourse in the United States will gain even more traction. The year 2021 could dawn with a robust, ideologically-charged anti-China narrative driving U.S. foreign policy.

That will not be good. Even at this early stage, in fact, the nascent anti-China narrative appears to be affecting cooperation with Beijing. Pressure to economically decouple⁠—especially, when it comes to medical supplies and pharmaceuticals critical to fighting the coronavirus⁠—have kicked into overdrive. It may only be a matter of time before the United States begins to over-politicize other things too, like fighting pandemics, climate change, and countering Chinese influence in the Third World. Such would be the painful⁠—yet, all too predictable⁠—result of the narrative politics to come.

The best hope, though, for U.S. moderation may actually lie within its partisan coalitions. Democrats, in particular, appear not altogether unified around Biden’s anti-China posture—some progressives openly balk at it. While unlikely, it is also not out of the question that if Trump’s popularity continues to nosedive, GOP worries of close association with him could cause similar fractures in Republican support for Trump’s hard-line on China. History demonstrates that intra-coalitional fissures like these tend to moderate partisan discourses and with that aggressive public narratives and/or policy abroad.

In the end, let’s hope something like that happens. It may be the only chance we have to pull back from our dangerous national moment with China.

Will Walldorf is Associate Professor of Politics and International Affairs and Shively Family Faculty Fellow at Wake Forest University. His latest book is To Shape Our World for Good: Master Narratives and Forceful Regime Change in United States Foreign Policy, 1900–2011.