Political Violence: An Aberration or the New Normal? 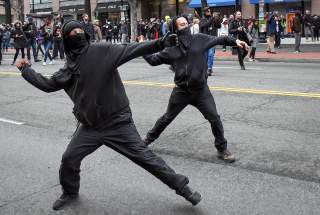 After the mass shooting in Alexandria, Virginia on June 14 at a local baseball field, where a gunman attempted to murder a group of Republican legislators, political violence emerged once more as a hotly contested topic. Conservative pundits accused left-wing politicians and the media of creating an explosive breeding ground of extremism. In response, left-wing commentators argued that it was far-right extremists, not leftists, who were most responsible for political violence. For all their disputes, both sides do agree political violence was a rising issue of concern. Most Americans seem to concur, with a recent Rasmussen poll showing that 76 percent of those surveyed believed political violence is more prevalent now than before.

The proximate cause of the latest debate is Donald Trump’s polarizing campaign, which prompted not only strong emotional responses, but also physical ones from supporters and detractors alike. There were several incidents of the candidate’s supporters assaulting protestors disrupting his rallies. In Albuquerque, New Mexico, and Costa Mesa, California, anti-Trump demonstrators clashed with police outside venues where the candidate was speaking. Then, on June 2, 2016, protesters attacked Trump supporters leaving a rally in San Jose, California. A few weeks before the election, someone firebombed a GOP field office in North Carolina, providing a dramatic ending to a season of high partisan tensions.

While Trump’s unexpected victory in November concluded a divisive election cycle, it did not by any means mark the beginning of national reconciliation. The deep animosity felt by some opponents of the new administration was on full display on Inauguration Day, when protesters covered in black clothing threw rocks at police and shattered windows of D.C. businesses and cars. Subsequently, police arrested 217 people on charges of felony rioting.

Around the same time, political violence spilled over from campaign rallies and the streets of the nation’s capital onto college campuses. A speaking tour by Milo Yiannopoulos, a conservative provocateur who was then technology editor at Breitbart, served as the catalyst for two major incidents. On the same day Trump took office, a Yiannopoulos event took a turn for the worse after protesters hurled bricks and paint at the police and attendees. The evening hit its lowest note when a Trump and Yiannopoulos supporter shot a protester in the abdomen. Not long after, a planned Yiannopoulos speech at University of California Berkeley was canceled after mass disturbances. According to reports, anti-Yiannopoulos protestors caused over $100,000 in damages and injured six people.

Explanations for this outburst of political violence on college campuses differ. In a comment to the National Interest, Yiannopoulos blamed “the thugs and fascists that believe free speech should be met with violence” along with “the progressive professors that have indoctrinated them, the administrators that allowed their universities to become reeducation camps instead of centers of learning and critical thinking, and law enforcement and city officials who seem unwilling to stop those intent on violence.” However, critics of Yiannopoulos allege that Yiannopoulos helped incite protests by planning to out undocumented students. Yiannopoulos has denied the claim.

Following the upheavals in Washington, DC, Seattle and Berkeley, one group found itself under particular scrutiny. Demonstrators associated with Antifa, a decentralized leftist movement, played a visible role in many of these protests. Unsurprisingly, it quickly became the object of strong interest and condemnation among conservative media outlets ranging from National Review to Breitbart. In an email to the National Interest, Yiannopoulos pointed to Antifa as a major actor responsible for shutting down his event at Berkeley.

Although Antifa has existed for many years and in numerous different iterations, Trump’s election has energized it and broadened its appeal. Koja, a pseudonym that an anarchist intimately familiar with Antifa uses to conceal his true identity, says that its membership traditionally consisted of “people on the far left,” but “right now it’s drawing in people even from more moderate positions who are frustrated and scared with the direction they’re seeing things go politically.” Antifa advocates “direct confrontation” with those it identifies as belonging to the far right. This strategy encompasses everything from “creating more community organizing and mass consciousness” to forcibly preventing speeches and rallies. In the eyes of Antifa members, these heavy-handed measures are a necessary and justifiable response. According to Koja, “When you look at what the far right has done historically and is doing now, you come to the conclusion that you can’t leave it alone.”

However, Koja insists Antifa’s endorsement of violence is not unconditional. According to him, many in the movement do not consider the average Republican a fascist or part of the far right. Speaking about the typical Trump supporter, he said, “The vast majority of them are probably beyond hope politically, but some of them are politically dissatisfied with the status quo in some way, and we rather have them on our side than have it come to blows.” Moreover, he asserts that there is a recognition among Antifa members that a physical response is not always the most strategically sound one. “You don’t want to create a situation where you are driving your enemies together,” he explains.

One of the most of the significant development over the past six months is the growing frustration with law enforcement on the right. Lauren Southern, a right-wing activist and political commentator, says that many conservatives concluded in the aftermath of Washington and Berkeley that “the police won’t protect us.” Consequently, some of them have resolved to take matters into their own hands. Groups like the Oath Keepers and Proud Boys have become a regular fixture at rallies, with the stated purpose of providing security to their attendants.

In a couple of high-profile incidents, right-wing groups and Antifa battled in the streets of Berkeley. The first took place on March 4, ending with ten people arrested. A police report from that day noted:

Many on both sides attended armed with weapons, shields, pepper spray, portable radios, smoke canisters, etc., wearing protective padding and helmets, and in at least one confirmed case, ballistic armor. These people actively inserted themselves into confrontations with those with opposing views.

Violence once again broke out a month later, on April 15. A makeshift barrier quickly gave way to a full-scale brawl. As part of the melee, several people were hurt with pepper spray and M-80 fireworks were thrown.

Since then, fighting in the streets has been limited. At the same time, high tensions persist at cities hosting opposing demonstrations. After Ann Coulter’s speech at Berkeley was canceled, many expected a repetition of the two previous confrontations between right and left, with some protesters carrying pepper spray and wearing protective gear. Ultimately, violence was averted. To keep the peace during a June 4 pro-Trump rally and its accompanying counterprotests, Portland authorities sent in riot police, who confiscated weapons, arrested fourteen people and even fired “pepper balls” at the crowd.

While street battles have gone down, several individual acts of political violence made news over the past month. On May 26, a white supremacist stabbed two men who attempted to stop him from verbally abusing a group of Muslim women on a train in Portland. Nearly three weeks later, James Hodgkinson opened fire at a group of Republican members of Congress, seriously injuring House Majority Whip Steve Scalise in the process. Most recently, two men stabbed the bodyguard of a prominent alt-right social-media personality, Tim Gionet, in Los Angeles. Although police deny that the attack had any political or racial motivation, Gionet asserts otherwise.

When it comes to the prospect for escalation, scholars adopt a cautious tone. Steven David, who has taught a course on political violence at Johns Hopkins University for many years, states that while there is some cause for concern, “we are far removed from the kind of civil strife that afflicts much of the world.” Furthermore, he emphasizes that America’s economic wealth makes it easier to resolve internal tensions. “Countries that are most poor are also most inclined to the widespread violence we see throughout the world,” David said.

By contrast, activists from both right and left offer less optimistic predictions about the future of political violence in the United States. Southern warns that while the scope is currently limited, “When we look at history, we need to think about what this could potentially lead to, not what it is right now.” On the other side, Koja raises the possibility of the alt-right “going back to whatever thuggish tactics that fascists before them have used” in response to increasing disappointment with Trump and growing political isolation.

Will this fresh spasm of violence peter out as it did many times in America’s past, or transform into something more serious?

Image: Protestors throw rocks at police during a protest near the inauguration of President Donald Trump in Washington, DC, U.S., January 20, 2017. REUTERS/Bryan Woolston.