Political Warfare Is Back with a Vengeance 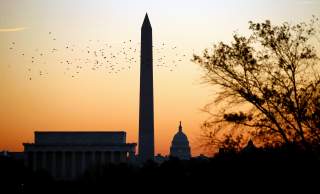 Perhaps one of the most important yet least defined leitmotifs of the Trump administration’s approach to national security is that of competition. The National Defense Strategy, released earlier this year, argues that “the central challenge to U.S. prosperity and security is the reemergence of long-term, strategic competition.” The concept pervades the National Security Strategy released in December with dozens of references throughout the document. President Donald Trump even introduced the new strategy saying, "Whether we like it or not, we are engaged in a new era of competition.” Despite the ubiquitous rhetoric, the United States still struggles to internalize what this means in practice. For much of the national-security apparatus, the “new era of competition” means a renewed focused on a high-end conflict with near peer adversaries, when it, in fact, reflects a deeper strategic reality. The United States’ principal adversaries are actually fighting—and gaining ground—by employing a host of tactics short of all-out war. This form of warfare, once called political warfare, is back with a vengeance, empowered by new tools and techniques. The United States has not sufficiently grappled with this form of orchestrated challenge across the political, economic and informational realms. The United States could benefit from relearning how to fight and win in this domain.

While war has long been viewed as a competition between adversaries, peace has been defined by absence of such conflict. The new U.S. national-security strategy and the defense strategy’s choice to also characterize periods of non-war also as periods of competition, therefore, makes a subtle, but important point—namely, that there no longer exists true periods of peace. Instead, we have entered an era of continuous conflict, varied in intensity but always present. The language of competition adopted in the current strategies harkens back to an earlier period in American history and the writings of famed American diplomat George Kennan. Writing about the last period of great-power competition between the United States and the Soviet Union, Kennan believed that the line between war and peace had blurred, and states were competing over security in many realms beyond open conflict. He coined a new term to describe the phenomenon: political warfare.

In a May 4, 1948, policy memorandum, Kennan—then head of the State Department’s policy planning staff—argued that “in broadest definition, political warfare is the employment of all the means at a nation's command, short of war, to achieve its national objectives.” In Kennan’s view, political warfare spanned a range of overt and covert activities, across all elements of national power diplomatic, informational, military and economic—to coerce an adversary and achieve contested ends below the threshold of conventional conflict.

Political warfare is the preferred form of warfare by both state and non-state actors today. While Russia’s unique brand of political warfare, especially its efforts to meddle in dozens of foreign elections, attracts the most public attention today, all five of the United States’ principal adversaries—Russia, China, Iran, North Korea, and terrorist groups like the Islamic State—employ political warfare to varying degrees. Russia employs insignia-less “little green men,” private military companies, and local militias to annex Crimea and wage war in Eastern Ukraine. China uses “civilian” fishing vessels to assert its claims in the South China Sea. Iran employs its shadowy Quds Force, the covert arm, to control a network of proxies throughout Iraq, Syria and the Middle East. Using such mechanisms of political warfare, these actors can advance their territorial interests without provoking a full-fledged military response by the United States and its allies.

Modern political warfare, however, extends beyond proxy and covert uses of force. Varying forms of economic pressure—bribes, blockades, or highly conditioned aid packages—are long-standing tools of statecraft that are now used for political warfare. The information arena is an increasingly important battleground. Thanks to relatively low barriers to entry to social media, even non-state actors—like the Islamic State—can wage sophisticated information campaigns to recruit and propagandize. The Islamic State’s ability to radicalize and inspire individuals to launch attacks in the United States and Europe poses one of the most vexing counterterrorism challenges today. Both state and non-state actors continually innovate in search of means of wreaking havoc far from their home bases, without firing a shot. As the intelligence community’s unclassified assessment of Russian interference in the 2016 American elections reveals, these methods succeed by exploiting social and political cleavages in the target populations, and can achieve intended effects through obfuscation and confusion as much as through persuasion.

Can the United States successfully resist and prevail against this insidious form of modern warfare? The United States has in fact conducted political warfare during periods of its history, most notably during the decades of the Cold War. While attention often focuses on notable covert-action debacles, like the Kennedy administration’s attempt to overthrow the Castro regime and the Reagan administration’s ill-fated attempts to bolster the Contras in Nicaragua, the United States’ political-warfare effort was broader, less kinetic and more successful than often portrayed. The United States’ aided left wing parties in France and Italy as alternatives to Communist parties during the early Cold War and supported the Solidarity movement struggle to free Poland from Communism. Under the helm of the United States Information Agency, the United States employed Radio Free Europe, Radio Liberty and Voice of America to carry its messages behind the Iron Curtain and to the world at large. Starting with the Marshall Plan, foreign aid, similarly, became a critical tool in halting the spread of Communism.

After the Cold War, political warfare fell out of favor in the United States. Without the threat of Communism or another great-power rival, the United States’ strategic attention shifted away from this low-level form of conflict to other objectives. Some of the infrastructure for political warfare was disbanded altogether; while others saw their missions diminished considerably. Of course, American adversaries did not follow suit so the United States finds itself playing catch up to try to reclaim its former dominance in this type of campaign.

Rebuilding American capacity to both wage and defend against political warfare will not be easy, nor will it come naturally. Much of the burden of waging political warfare falls to the civilian arms of government—the intelligence community and, traditionally, the State Department—rather than to the Department of Defense (DoD). To the extent the DoD does have a role in political warfare, which often falls more to special operations than conventional forces. Consequently, the Trump administration’s increases to the defense budget—much of which is dedicated to preparing the military for high-intensity conflict against China or Russia—will not on its own solve the United States’ relative deficit in political-warfare capabilities. And in fact, its cuts to the State Department, USAID and other civilian agencies may, in fact, exacerbate this gap.

Instead, successfully combating political warfare will require a whole-of-government approach. A few promising signs of such collaboration are the Russia Information Group, a regular interagency forum, and DoD support to the Global Engagement Center housed at the State Department. But much more needs to be done to compete effectively. A worthy step would be for the intelligence community to increase collection and analysis capabilities dedicated to detecting incipient subversion, coercion, and nonother emerging threats short of conventional warfare.

The DoD at large and the special operations community in particular could play key roles in opposing the proxy and covert uses of force by American adversaries. In some cases, this may drive additional resourcing needs. Military Information Support Teams and military intelligence personnel will be in high demand. In other cases, it will require more organizational changes—including closer coordination between Defense and State Department efforts.

Since political warfare is about achieving political objectives often in the court of public opinion, the State Department could find itself making a notable shift to the center of this fight—both in terms of its public diplomacy role, but also in coordinating the U.S. government response abroad to ensure this interagency effort is working in unison. This will require both additional resources and a shift in focus.

A former active-duty Army officer, Raphael S. Cohen is a political scientist at the nonprofit, nonpartisan RAND Corporation and an adjunct professor of Security Studies. Linda Robinson is a senior international and defense researcher at the RAND Corporation and author of multiple books on special operations and irregular warfare. They are authors of the recently released report Modern Political Warfare: Current Practices and Possible Responses from which this essay has been partially adapted.